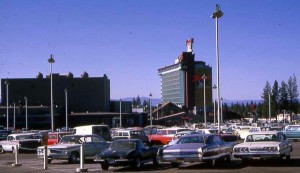 Both photos, 1965 and 2012, I snapped from the same vantage point in Harrah’s parking lot, evidenced by the distinctive profile of the Harrah’s South Shore Room theater rectangular fly-loft at left.

Among other things, notice the 1965 predominance of American cars, and that today’s parking lot has rotated 90 degrees, apparently affording more spaces. 1965 was decades before today’s multilevel garages now on-site.

In the 1965 photo, those three round bulbous objects on the roof of Harrah’s showroom loft were carbon-arc searchlights which crisscrossed and scanned our Tahoe skies at night, much like the opening of a 20th Century Fox movie, or as seen at car lot or grand opening promotions. Thus, as visitors arrived over Echo Summit at night, Stateline was very obvious.

Those searchlights were discontinued about 1969, perhaps bowing out as “visual pollution” per the new TRPA, I’m told. 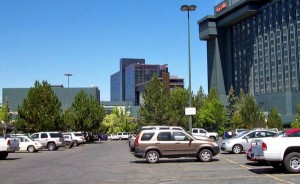 Harvey’s Wagon Wheel Hotel and Casino in the 1965 photo was Tahoe’s first high-rise at 11 stories. Harvey Gross’ historic cow-skull with wagon wheel logo, dating from the 1940s is seen on the roof and again fronting Highway 50. Directly under the roof sign, the glass elevator with twinkling white lights traversed the outdoor southeast corner of the hotel up-and-down from the casino floor up to the elegant “Top of the Wheel” restaurant, cocktail lounge and live music dance floor, the locals’ favorite. Gas-fired tiki torches adorned the motif. The outdoor elevator still operates on scheduled evenings today.

After an extortionist’s bomb in August 1980 gutted the lower six floors, Harvey’s rebuilt that original hotel and soon attached a modern 19-story expansion, becoming what is still the largest hotel at Lake Tahoe.

Today, Harveys and Harrah’s are commonly-owned by Caesars Entertainment.