“The Lake burst upon us – a noble sheet of blue water lifted six thousand three hundred feet above the level of the sea, and walled in by a rim of snow-clad mountain peaks that towered aloft full three thousand feet higher still! It was a vast oval, and one would have to use up eighty or a hundred good miles in traveling around it. As it lay there with the shadows of the mountains brilliantly photographed upon its still surface I thought it must surely be the fairest picture the whole earth affords.”

TAHOE CITY – The debate rages on about the location of Sam Clemens’ campsite along Lake Tahoe’s shores in September 1861 when he and a companion burned down a swath of forest while trying to stake a timber claim.

“I must confess to you that my memory is not what it when to be,” Mark Twain, as portrayed by McAvoy Layne, said before the debate. “When John Kenny and I hiked over we camped at … I seem to be getting a headache. Let’s see if one of these fine gentlemen can restore my aged memory.” 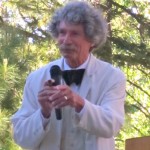 The North Lake Tahoe Historical Society hosted the debate between authors David Antonucci and Robert Stewart at the Gatekeeper’s Museum last week. Antonucci advocates a site near present-day Speedboat Beach on the North Shore based on scientific research, while Stewart believes the campsite was located south of present-day Sand Harbor State Park on the East Shore based on historical documentation from the 1860s. Both authors are adamant in their theories of the location of Clemens’ campsite – one located in California, the other in Nevada.

In September 1861, Clemens, who later adopted the pen name Mark Twain, traveled to Lake Tahoe with John Kenny to stake a timber claim and become wealthy timber barons. Clemens recounted his journey to Tahoe in his 1872 book “Roughing It” in which he and Kenny walked to Tahoe. During their journey, the pair starting a forest fire where they were attempting to lay a claim. After the fire, the claim was abandoned. It is the location of Clemens’ claim that has remained a mystery since.

Using scientific research as his basis, Antonucci asserts that Clemens’ timber stake was located in Tahoe Vista, which he also details in his book “Fairest Picture: Mark Twain at Lake Tahoe.” Antonucci’s debate is based on Twain’s description of the adventure in “Roughing It.” He compared the descriptions to conditions at Lake Tahoe in 1861 – the water level of the lake (before the Truckee River was dammed at Tahoe City) and the beaches that existed during this time period, the diameter of trees described by Twain, the presence of both grey and white boulders, and the route by which the pair hiked from Carson City to Lake Tahoe. 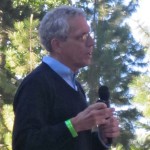 Antonucci says his evidence is based on “the intersection of literature, science and history,” noting that he believes Clemens and Kenny travelled up Ash Canyon and the Washoe Trail from Carson City to reach Tahoe before coming to Hidden Beach. They then rowed across Crystal Bay to Stateline Point, according to Antonucci, where they then traveled to a site near Speedboat Beach where they staked their claim.

“In the analysis of his descriptions (in ‘Roughing It’), it’s the only route that meet all six criteria given by Mark Twain,” Antonucci said.

“I say, look at both sides and decide for yourself,” he said.

Stewart, on the other hand, looked at original, historical documents to draw his conclusion that Clemens’ claim was on the East Shore of the lake. Using surveys, letters and court documents from the 1860s, Stewart, author of “Finding Sam Clemens Cove,” puts the claim about one-quarter of a mile above the present-day Thunderbird Lodge. 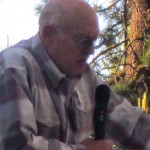 Clemens and Kenny traveled down to present-day Glenbrook, Stewart claims, before rowing across Glenbrook Bay and continuing on to a site south of Sand Harbor State Park.

Stewart said his research is “based on documentation and the survey by the Ormsby County surveyor, so the plate (for The Brigade Claim) had to be in Ormsby County,” which was a former county in Nevada that incorporated the East Shore. Stewart argues that since The Brigade Claim was in Nevada, so must be Clemens’ stake.

Both historians refuted the others claims in a rebuttal, but left much of the audience split down the middle on which site seemed to be the correct one.

“It comes down to (Stewart’s) historical narrative versus Antonucci’s empirical data,” as one audience member noted.

Even Clemens remained confused about the location of his claim.

“I feel like an envelope without an address … I’m the most mixed up person at the lake.”

The debate was part of the North Lake Tahoe Historical Society first Thursday series, which continues in July and August. For more information, go online. The debate will continue on the website, where comments are welcome on this ongoing issue.