In the second nightclub incident in a few weeks, South Lake Tahoe police were trying Monday to piece together reasons why a 48-year-old local man pulled a gun on another resident at Whiskey Dick’s Saloon in a sudden fight this weekend that resulted in his arrest on charges of attempted murder. 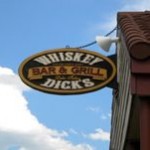 Scott Enerson, who was booked into the El Dorado County Jail with no bail, allegedly pulled the handgun from his waistband and placed it to the head of Harlee Suida-Tuttle early Sunday morning shortly before the bar was to close. But the gun did not discharge, according to police. In its malfunction, the shot was fired into the air and hit the ceiling of Lake Tahoe Boulevard bar.

Suida-Tuttle apparently restrained Enerson as city officers arrived with assistance from the El Dorado County Sheriff’s Department and California Highway Patrol. The call came in at 1:45am June 3.

No one was shot. The two men suffered from minor injuries.

It is unknown whether Enerson had a permit from the “uncommon” handgun, police Chief Brian Uhler told Lake Tahoe News Monday night. It’s also unclear what the relationship is between the alleged shooter and victim. Detectives are conducting an investigation.

Alcohol or drugs could be contributing factors.

“They’re in a bar, and it seems likely they’re drinking,” Uhler said.

The chief watched a surveillance video captured in the bar and surmised the action escalated to a level of intent that went way beyond mayhem. Charges rose to attempted murder because Uhler said police detectives were able to determine that Enerson may have tried to shoot the gun against the victim’s head and the gun malfunctioned.

“It actually happened quite quickly. The victim was lucky it didn’t discharge,” Uhler said.

No one from Whiskey Dick’s would talk to Lake Tahoe News on Monday night.

Uhler plans to meet with officers to discuss possibly beefing up weekend scheduling after a disproportionate number of serious calls at local bars have come in.

“This could be a case of lightning striking, but we want to enforce what’s going to be responsible bar activity with the seriousness of these incidents,” Uhler added.

Officer Aaron Crawford, who responded to the incident, said Enerson had to be placed in restraints and believes alcohol or drug use could be a factor if not both.

The case comes on the heels of a tragic beating at Mo’s Place just two weeks prior to this incident. The two bars are a few miles apart from the other.

“Obviously, this is alarming to us, but bars are always an issue in every city,” Crawford said. “It could be a sign of the times.”

As of Monday night, no arrests had been made in connection with the Mo’s Place beating.

“We will work with the DA’s Office on presenting evidence and they will assess to determine if there are to be any prosecutions. An arrest or arrests is a possibility, but it is not something I can publicly speculate about,” Uhler told Lake Tahoe News.