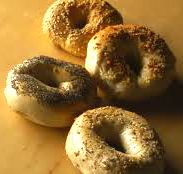 There’s something very cool about taking a historical event in time and then using that as the backdrop for a movie that leaves you thinking, “Hmmmm. Maybe that really did happen after all.”

I think that’s why I loved watching “Raiders of The Lost Ark” a gazillion times because it was set during World War II and maybe Hitler really did have a thing for antiquities. We do know he liked collecting priceless pieces of art, so who’s to say he didn’t know about the ark of the covenant and having possession of it could take over the world?

First off, let me say from the start: when you do see this movie, let your mind just pretend that what you’re seeing on the big screen is true and that maybe it could have happened. After that you’ll settle into a groove of sorts believing that our 16th president was probably our greatest president not just for freeing the slaves, but also that as a vampire slayer too.

And if you’re also a real fan of history (or Abe Lincoln), you’ll probably laugh even louder because of the historical context that this flick has been placed into. I mean, look at “Air Force One” having Harrison Ford playing a kick-ass (literally) president who was above scandal and very ethical, which is more than I can say about some of our current politicians, eh?

I watched “Abraham Lincoln: Vampire Hunter” with comedian Bob Zany, who is also a student of history, so we both laughed when we were introduced to historical figures throughout the movie who entered young Abe’s life and wondered if they had any inclination that Honest Abe was deadly battling the dead? We also cracked up at how good Abe was with an axe and apparently all those years splitting rails when he was younger would pay off handsomely later.

By the way, newcomer Benjamin Walker makes for a perfect young Lincoln, as he is both tall and lanky with a spot-on likeness resembling the real thing. The movie is directed by Timur Bekmambetov (best known for also directing “Wanted” and “Night Watch, Day Watch”) who does a nice job adapting Seth Grahame-Smith’s novel (he’s also the screenwriter) from the page to the visual without making it look corny. Speaking of visual, cinematographer Caleb Deschanel adds a lot realism to visual by giving the movie a vintage, almost black and white look to it but still maintaining some color almost as if the movie were shot in the early and mid-1800s if they had the cameras to do so. I might add that Tim Burton is also one of the producers of this movie. 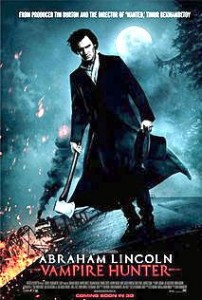 Without giving away too much, there’s a reason Abraham Lincoln sought out to be a vampire hunter at a very early age but had to wait until he was a young man in order to actually kill one. You see it takes training. He does come across such a man who, as it turns out is also a vampire hunter. His name is Henry (played very seriously by Dominic Cooper) who teaches him the tricks of the trade. It’s also worth noting that unlike the vampires I grew up with (Eric Roberts from “Fright Night” and the all time classic vampire, Bela Lugosi were personal favs) these creatures of the night work (and kill) during daylight hours which means one has to really be on their guard at all times. Darn those “Twilight” movies and their young daylight-oriented vampires.

The cast is pretty good too with Mary Elizabeth Winstead playing the young Mary Todd Lincoln with special kudos going to Rufus Sewell and Erin Wasson who play the sinister vampire pair that will make you want to wear a Plaster of Paris turtleneck sweater just to keep your neck protected no matter how hot it is outside.

Is it a good movie? I think so, especially with the recent splattering of remakes, sequels, prequels and animated characters trying to be too hip for the room you know what I mean? Plus, there’s the added advantage of not having to see this in 3-D but trust me, you’ll be blown away (literally) if you do elect to see it in that format. And for you Abe Lincoln history buffs out there you’ll particularly like the scene when Mary Todd yells to her husband from outside, “Hurry up Abe! We’re going to be late for the theater!”

“Abraham Lincoln: Vampire Hunter” is rated R for violence throughout and brief sexuality with a running time of 105 minutes.

Howie Nave is host/emcee/manager of The Improv at Harveys. You can hear him Monday-Friday 6 to 10am on KRLT FM-93.9.