Rare woodpecker chicks in burned forest stands at Lake Tahoe won’t survive if the U.S. Forest Service proceeds with a contentious post-fire logging project, according to conservationists pressing the agency to postpone cutting around the trees until after the nesting season in August.

The John Muir Project is asking for the delay while awaiting a ruling on an appeal to the 9th U.S. Circuit aimed at blocking what’s left of the salvage logging operation where the Angora Fire five years ago burned more than 3,000 acres and 254 homes on the edge of South Lake Tahoe.

Chad Hanson, the group’s executive director, documented black-backed woodpecker chicks this week in at least one nest in the cavity of a standing dead tree at the project site and suspects there are more. 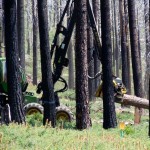 Trees in the Angora burn area have been taken out each year since 2007. Photo/LTN file

Forest Service officials said Thursday they were reviewing the matter. Lawyers for the agency indicated to the critics earlier this week the plans could not be changed.

Hanson’s group and others recently petitioned the Interior Department for Endangered Species Act protection for the black-backed woodpecker in the Sierra Nevada, eastern Cascades of Oregon and Black Hills of South Dakota and Wyoming.

The petition is the first seeking protection of a species tied to post-fire habitat. It says the woodpecker has survived for millions of years by eating beetle larvae in burned trees – 13,000 larvae annually – but is threatened by dramatic reductions in habitat resulting from fire suppression and post-fire logging.

At least 300 acres of partially burned and standing dead trees remain uncut in the Angora project area that calls for logging up to 1,500 acres – a total area of more than 2 square miles on national forest land on the west edge of town.

Hanson said the logging had moved within a few hundred yards of the actual nest tree where he identified a mother black-backed woodpecker feeding chicks on Memorial Day, accompanied by a photographer for the Associated Press.

Agency officials told the group normal procedures dictate any documented nest tree itself be spared but no additional protection currently is planned at the project in the works since early 2009.

Hanson, a wildlife ecologist at the University of California, Davis who has been challenging logging projects in the Sierra for more than a decade with mixed success, said a bare minimum buffer of at least 60 acres is needed.

With less, he said even if the chicks’ parents don’t abandon the nest they won’t have a big enough foraging territory to keep the young fed. He said the chicks won’t be able to fly for weeks and logging already is up against the 60-acre core.

“There are some other unlogged areas they could fly to as long as the nest core area was protected, but if that’s gone, the chicks would just starve to death,” said Rachel Fazio, a lawyer for the group who argued their case last May 14 before a three-judge panel at the federal appellate court in San Francisco.

Fazio said it is ironic that the Forest Service and the Tahoe Institute for Natural Science are co-hosting the third annual Lake Tahoe Bird Festival on Saturday at the Taylor Creek Visitor Center just a few miles from the woodpeckers’ nest.

“We confirmed the nest tree and the birds were there on Monday but I don’t know if they’ll be there next Monday,” she told AP. “It’s one of the rarest birds in the Sierra Nevada. We can’t have logging activities which basically kill off the next generation. It seems like this should be a no-brainer.”

Forest Service spokeswoman Cheva Heck said Thursday they still were examining potential alternatives but had no immediate response to the request for delay.

“As managers of public lands, we have the responsibility of balancing multiple priorities. We are still researching each of our options before deciding the most effective way to proceed,” Heck said in an e-mail to AP.

Fazio notified Justice Department lawyers representing the Forest Service in the 9th Circuit case on May 24 that they had spotted two pairs of black-backed woodpeckers in an area slated for logging. She said additional observations would be necessary to confirm nesting but requested in the meantime that USFS delay operations in the area until nesting season is over.

Justice Department lawyers told Fazio in an e-mail May 25 the agency’s normal practice is to protect nest trees but it would not be possible to protect 60 acres around nest trees without undermining the project’s goals, including forest restoration and public safety.

Fazio repeated the request May 28 along with photos of the nest and mother she hoped would prompt the agency to “reconsider its decision to not protect this nesting pair and their chicks.” She said on Thursday she understood the photos had been forwarded to Forest Service biologists but she had received no additional response.

It’s not clear if the 9th Circuit will rule by August on the appeal seeking to overturn a U.S. district court ruling in Sacramento denying the John Muir Project’s request for an injunction to block the logging. The group says the agency’s environmental assessment of the project flies in the face of the latest, best scientific research.