Where does the truth lie?

It’s an answer only the author knows. But insights into the hidden reality in the poetry shined through Friday night as Jason Schossler spoke to nearly 60 people at Lake Tahoe Community College. He was in town from Philadelphia to launch his book “Mud Cakes” that was published this month by Bona Fide Books of Meyers. 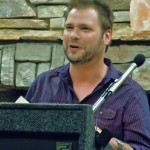 “Mud Cakes” – so titled after one of the entries in the poetry collection – is Schossler’s first collection of poems to be published. He is the winner of the 2010 Melissa Lanitis Gregory Poetry Prize.

With his mother and fiancé in the audience, Schossler admitted it was mom who unflinchingly encouraged him to write at an early age and his girlfriend who lovingly accepts the non-traditional love poems.

Much of what Schossler expressed in the six poems he read was his life as a child – with some admitted literary license. From Skylab falling to Star Wars to his father leaving when he was 10 – there is something in his words that enables Schossler to resonate with his audience.

Expressive in his delivery, his words danced in the air.

The Temple University instructor took questions after the reading. He expressed a desire to give back to youth as a mentor, hoping to do more of that when he goes home. He reached out to local youth while in town – working with South Tahoe and Wooster (Reno) high school students.

Schossler spoke of the need to find the small nugget in an idea and develop it into poetic prose. He also said there is no such thing as writer’s block – it’s something that needs to be plowed through, perhaps by taking a new approach to what the writer is trying to convey.

While Schossler has written fiction, he believes poetry is where his future lies.