A decade after Sept. 11, 2001, the terrorist attack may not turn out to be the Lake Tahoe economy’s worst enemy. But it didn’t help with the snowball effect of the economic downward spiral.

The South Shore’s long recovery through peaks-and-valleys from a series of economic challenges started in March 2001. It shows a region that’s both reliant on and hard hit by a drop in tourism. The challenges since the March 2001 recession are in line with national trends.

Fear of travel, skyrocketing fuel prices, subsequent wars, high unemployment, a burst housing bubble and a few recessions before and after the horrific event have contributed to a plummet in consumer confidence and travel numbers.

Consumer confidence fell substantially according to national reports in one month from August to September 2001. Tourism, and with that hotel occupancy, took a dramatic drop across the nation. In New York City, hotel occupancy fell 40 percent and 3,000 employees were laid off, according to reports compiled by the U.S. Commerce Department.

Then, the worst recession in a generation forced companies to retool, rethink and re-evaluate business as usual.

Throw in smack-you-in-the-eye competition from Indian casinos to the largest South Shore employers, and Tahoe may have lost and seen the last of its tourism heyday.

“Certainly air transportation has become quite a bit more annoying since 9/11,” Lakeside Inn and Casino Chief Executive Officer Mike Bradford told Lake Tahoe News, also echoing a few national studies on the subject. “But no doubt, it’s shown how resilient we are (as a country).”

The longtime local businessman has seen all the other economic factors hit the Lake Tahoe Basin hard.

“Tahoe is in a unique situation,” he said, referring to tribal gaming options popping up all over the Central Valley and on the West Slope. What stands out for Bradford while observing the region is in a sense “what hasn’t changed.” And “that’s unfortunate when you consider what we have to offer,” he said, characterizing the lack of an evolving tourism market as a major impediment.

“Because it’s no longer an economy based on gaming – we have to make adjustments. I’m not sure we’ve learned much since (2001), but we’ll need to take an educational look at Tahoe after 9/11 and now. Really, I bet it looks not that much different except for the excavation of Project 3 (South Lake Tahoe’s convention center redevelopment project based near Stateline).” 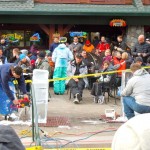 Tourists keep coming to Lake Tahoe, but they aren’t spending money like they did before 9/11.

The casino chief admitted to the difficulty in quantifying any particular factor like terrorism attacks based on the eastern seaboard. However, 2001 appeared to serve as a catalyst for challenges to business from one side of the United States to the other.

Immediately following Sept. 11, the stock market closed for four days – the third time in history. Only two other events – the 1972 Munich Olympic massacre and the Wall Street bombings of 1920 – showed a 252 trading-day decline in the stock market. Insurance losses topped $30 billion – the worst in history.

“It’s certainly been our Pearl Harbor. From an aviation perspective – using that as a reference point, 9/11 brought a dramatic change to the aviation world. Airlines took a significant beating that some couldn’t recover from. The impact of tourism was huge. When you take a look at the airport now, it’s a hassle some people avoid altogether,” said Adam Mayberry, a Reno-Tahoe Airport Authority board trustee and former spokesman for the Northern Nevada aviation center.

But the problems started even sooner.

“We couldn’t seem to get a break,” Mayberry said. In about the same time period, American Airlines bought Reno Air – which did a substantial business out of the Reno-Tahoe airport – “then reduced flights,” he added.

However, the Reno-based airport experienced a much better recovery than many airports following 9/11. Before 9/11, it offered 80 departures a day. Then with much work, the airport authority and staff did the leg work to get the number back up 72 today.

Current airport spokesman Brian Kulpin cites high fuel prices as more of a culprit, using history to back up the opinion. Five years after 9/11, the departures clawed and scratched their way up to 90 flights a day.

“But when fuel hit $145 per barrel in July 2008, our number of daily departure flights hit a low of 54,” he told Lake Tahoe News. Moreover, more than 100 commercial airports nationwide lost all of their air service in summer of 2008.

The recession hit airlines like Aloha and Northwest hard, with them either going out of business or merging with another. Then came travel’s ugly byproduct of 9/11, the recession and fuel prices – baggage fees and liquid container restrictions.

Impact on the South Shore

The recession has taken its toll on Lake Tahoe business. First, there are the musical chairs of retailers and restaurants on the South Shore. Second, boarded up buildings diminish the natural scenery. Of the businesses left, budget and creative adjustments had to be made.

Marlene Lewis, the manager at the Great Outdoor Clothing Co. at the Y, has noticed a steady decline in business in at least the last handful of years working there.

She points to the combination of Indian casino competition, recession and 9/11 as the culprit for our town’s downward spiral.

Lewis worked at Albertsons during 9/11 and remembers how people walked around in a daze in the store.

“But about three years ago, things really started declining,” she said, referring to her current business at the Factory Outlet center. She further quantified her shop’s drop in business by about 30 percent.

Jana Walker, who runs Sealed With a Kiss and the Lakefront Wedding Chapel, has seen a mixed bag as a result of 9/11 and the recessions. Her retail shop has called on her creativity.

“Being in business here, you have to have creativity, flexibility and ingenuity – or you’ll be passed up,” she said. “You can’t rest on your laurels.”

Walker admitted to making fewer buying trips for the Heavenly Village shop since 2001. And buying mistakes are less forgivable than previous decades. In her other business, the wedding chapel has seen a big drop in the large weddings since 9/11.

“People aren’t flying in 50 people or so anymore,” she said.

Even though she cites the recession as a worse culprit to business than 9/11, Walker recalls that time period as a trying one. Days after the terrorist attacks, she organized a local fundraiser for the victims of 9/11 at the casino corridor. Hundreds of people showed up. Most who attended told this reporter that life as we know it had changed forever.