The early morning started out like any other day for me — in pursuit of coffee from the kitchen. Along the way, I turned on the television news and couldn’t believe my eyes. A jet was flying into a high-rise building later identified as one of the Twin Towers in New York City.

Like most Americans on Sept. 11, 2001, I was transfixed. How could this be? Was the pilot suicidal or asleep?

It didn’t take long before terrorism seeped into my cynical brain when I saw a second plane hit the next building.

Being a news reporter forced me to jump out of my workout clothes and onto the telephone, where I woke up the newspaper’s editor, Michael Green. He had no television, so I had to describe this unprecedented event on the East Coast and convince him it was bound to reverberate to the West.

The newsroom was rocking with activity that most community papers never see. It reminded me of the old days at larger newspapers. The conference room became a designated “war room.” Assignments were handed out readily to journalists who I’d never seen make it to work before 8am.

My primary assignment was clear and evident. I would drive to the Reno-Tahoe International Airport, where I certainly expected chaos.

On the way, I called the Federal Aviation Administration and got on a mass media conference call in which it was difficult to hear yourself think. Questions thrown out by journalists across the United States peppered the line. The FAA was shutting down airspace across the nation. The fear was astounding. Thirty-plus airplanes were unaccounted for, and aviation officials ran out of answers – abruptly leaving the conference call.

With another plane flying into the Pentagon and another into a Pennsylvania field by midmorning, targets all over the country became a real threat.

When I arrived at the airport, traffic was backed up. Police shuffled people away from the doors of the terminal as the airport was being evacuated. Frantic passengers crowded the rental car counters to make their destinations – the long way. They ran out of vehicles that day.

I’ve never seen such cooperative negotiation. I heard many accounts of people sharing vehicles headed to states thousands of miles away from each other. Who knew when we would be able to fly again? 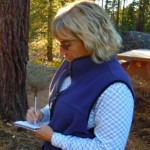 The thought entered the mind of Adam Mayberry, the airport’s public information officer at that time. Now an Airport Authority trustee and spokesman for the city of Sparks, Mayberry was forced to go into overdrive 10 years ago. He established a few news conferences, kept a line open for him at all times and even spent the night at the Best Western across the street from the airport.

Sept. 11 started with a shrug by Mayberry, then disbelief turned into tragic shock and a long working day.

While law enforcement and maintenance crews were removing trash containers and shutting down roadways, Mayberry, who is a pilot, was concerned with the public safety message. With all the tools and tactics for various scenarios, nothing matched this event.

“We have all these emergency plans in place, but there’s no scenario in that red binder of a national grounding as a result of a terrorist attack,” Mayberry recently told Lake Tahoe News. And to top it all off, Airport Director Krys Bart was struggling to return from a meeting in Canada.

Mayberry characterized the closing of the region’s airport as surreal. That was a good description. I stayed long enough that day for it to become a ghost town.

The few stragglers left to fend for themselves in trying to get home stayed glued to the televisions. I understood. It took me a few days to pull myself away. It was as though if I kept watching, the outcome would change.

It dawned on me what day it was – 9-1-1, an emergency call sign. I wondered why little mention was being made to that irony.

Instead, I concentrated on my work upon my return to the office late that afternoon. It was as active as the morning. I went home late that night exhausted — mentally, physically and emotionally. Nonetheless, I summoned enough energy to watch rescue efforts in New York pan out on television.

Outside of work, people’s consciousness in the days that followed fluctuated between a general haze and willingness to share. In times of crisis, we often pull together. There was an evident return to home and hearth as loved ones appreciated each other more and strangers in the remote town of South Lake Tahoe formed a kinship.

Forget talking about the weather. Our lives appeared to become more grounded in our roots and genuine humanity.