I was not sure if she had received the gift I had sent yet, a small gold kaleidoscope with a colorful glass wheel on the end. I had a habit of sending gifts late.

Summer lived in Elizabeth, N.J., about 15 miles from the heart of New York City, and 2,700 miles from my home in Genoa. She worked in Manhattan and would have caught the train to Penn Station more than an hour ago. I had visited her for two weeks that May and we had ridden that train several times.

Now, however, I was back home in Genoa and had to be to work in half an hour. I was a cart washer at the Genoa Lakes golf course, and though I hated the early hours, I did appreciate the free golf.

After dressing and grabbing a quick breakfast, I jumped in my car for the morning commute. At about a mile on a country road, it was considerably less time-consuming than Summer’s.

As I started on my way, it was clear that this morning’s radio content was different than the usual music selection. In fact, there was no music at all. Just people talking about a horrible plane crash in New York City, buildings falling, people dying and possible terrorists.

It only took a few minutes to get to work. I pulled my car into the usual space set aside for employees, but could not bring myself to turn off the engine. I sat there, frozen in my car, listening to every word they were saying on the radio, trying to comprehend.

My first thought was of my sister. She was there, in the city under attack. I knew from my trip a few months before that she worked blocks from the World Trade Center, miles even. I also knew the rest of my family did not know this.

As I sat in my car, paralyzed by the news, my parents, brother and grandparents were in Montana, glued to their televisions.

“My initial thought was that she’s not OK,” my grandmother recalls of that day. “And grandpa was just a nervous wreck. He paced the floor continually; he was just so sure something had happened to her.”

My mother, like me, retained a little more optimism.

“At first I thought, New York’s a big city; she’s probably not close by. But I couldn’t get ahold of her to find out,” my mom said. “But the more I watched the news, the more I thought she might be nearby.”

My sister had visited the World Trade Center a number of times. The ticket office there offered Broadway show tickets without waiting in line, and the restaurants had decent food. Her birthday being only a few days earlier, Summer and some friends were planning to celebrate that evening with dinner and a show. 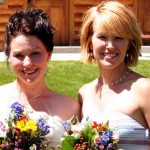 As soon as my mother heard the news, she tried to contact Summer, her oldest child, but to no avail. All the phone lines in the New York area were down. She tried numerous times over the next few hours, as did my grandparents.

My dad remembers calling Summer maybe a dozen times throughout the morning using his cell phone or a landline whenever there was one nearby.

“You just worry yourself sick until you find out,” he said.

Finally, I turned off the engine and walked hurriedly toward the cart barn, my thoughts racing. Did my family know what was happening? Did my boyfriend know? He was probably still in bed. Did the people at work know? And was my sister really OK?

As I walked in, five minutes late, I was reprimanded for my tardiness. I did not care. Didn’t they know I had a sister in New York? Didn’t they know what was happening? I wanted to go home and call my family and watch the news.

As the morning dragged on, I busied myself at work, and, much like my parents, kept telling myself Summer was fine. I had no access to a phone and spent the entire shift impatiently anticipating my release.

My mother and father also went to work that morning. Staying home was not going to do them any good, and Montana was not under attack.

At the office, coworkers asked my mother about Summer. They knew she lived in the New York area and wondered if she was safe.

“You always worry when your kids are not close by,” my mother said, “especially when you see something like that in their neighborhood. And you get more worried as the day goes by and you can’t get ahold of them.”

My grandparents, on the other hand, were home, watching the incessant news coverage, worrying, crying and praying.

It was not until sometime around noon or 1pm that my parents received a phone call. My sister was fine. Cell phones were still down around New York, but she had managed to get through using a payphone at a nearby school. The call was short; a line of people were waiting to use the payphone, but she wanted everyone to know she was fine.

“Oh god, it was such a relief, it was just such joy,” my grandmother said of the news. “… we had always said we were so lucky that we had never lost any of our grandchildren, and thought maybe our luck had run out.”

In her small basement apartment in New Jersey, Summer was getting ready for work while watching the Fox 5 news. She saw the footage of the first plane hitting the World Trade Center.

“I looked at it, but I didn’t think anything of it,” she recalled. “I don’t know why. I was like, ‘god that’s horrible, but I still gotta get to work.’”

Thinking there must be some issues with air traffic control, Summer hopped in the car en route to the train station, still determined to go to work. She remembers listening to Howard Stern on the radio, a very serious, humor-free Howard Stern, covering every second of what was going on: the Pentagon, Pennsylvania, the second plane.

“That’s when I thought, ‘this is scary, I’m not going to go into the city today,’” she said.

She had already taken time off work to fly to Montana two days later. With airports shut down and the city in wounded chaos, Summer decided to start her trip early. She left that day by car.

On that cross country drive, she recalls seeing evidence of patriotism displayed everywhere and how the nation visibly banded together.

However, returning to the city the following week was when it really hit her, Summer said. As she stepped off the train into Penn Station like she had done so many times before, she stepped into a very different New York. This one had missing person posters plastered everywhere, most of them handmade. The once bustling city streets were quiet. Train station parking lots were filled with cars no one picked up for days, weeks. There was no one to pick them up.

Though she was in the city daily, my sister did not visit Ground Zero until Thanksgiving of that year. The site was still smoldering, and the smell sickening. Missing person flyers still posted.

The aftermath, she says, was almost worse than the tragedy itself: the change in the city, the somberness and those faces staring back at you from the ever present flyers.

Our family is lucky; we are all still here to tell our story of that day, to remember and to be grateful. Many were not so lucky. But whether you lost someone close to you or not, here we are 10 years later, still feeling the aftermath of that day: Sept. 11, 2001.