Throughout the day on Sept. 11, 2001, I kept being drawn to the most sacred temple at these historic Inca ruins in Peru. Pages of my journal talk about the experience.

Later that night and still today, I am compelled to believe that stone brought me a source of spiritual energy that resonates calmness when I think of her and of 9/11.

I had taken a six-month sabbatical from my job as an editor of the San Francisco Chronicle, with four months of it spent in South America. I was finishing week one of the trek when the cowards leveled the Twin Towers.

Being out of the country during this momentous time has left me not sharing the intense feelings of those who were on U.S. soil that morning. In reflecting back on my memories – aided by my journal and emails to my parents – I can honestly (and selfishly) say I’m glad I was where I was, doing what I was doing.

Getting back to Cuzco that night was a bit harrowing because of the transportation strike, not speaking Spanish, and fires burning in the road. I thought I had a great story to write home about.

Somewhere along the way word came that a plane had hit the towers. We thought it a Cessna or something small, no surprise there would be deaths associated with it. But somehow I knew it was bigger than that by the time I got back to my hotel. I just didn’t know how big.

I asked a hotel employee to put CNN on in English. He looked at me with an expression that said, “Oh, god, she doesn’t know.” 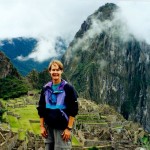 It didn’t take long to see what I hadn’t known until that moment. The videotape of the planes hitting the World Trade Center kept playing. It was surreal. It was like a bad B movie that wouldn’t end.

The next day was spent watching CNN and emailing family and friends. People filled the Internet café. Wallpaper on one computer was of four panel photos of the WTC collapse.

My journal on Sept. 12, 2001, says, “I’m not thrilled to have in my possession a ticket on American to JFK in December. I really want to be at home to see-hug all my family [and] friends – but at the same time staying on track may be best – and for now that’s what I’ll do. Last night was restless because of this news – today I was a bit numb – I just wanted to be around English speaking people – ah – how we migrate to people like ourselves.”

A few days later I’m at Lake Titicaca where I meet a couple from Philadelphia traveling with their adult daughter. They have black armbands as a symbol to those who died in New York City, Washington, D.C., and Pennsylvania. We cut one in half and I wear mine with honor.

Eventually I tie it to my backpack – where it stayed for the entire trip.

I’m getting word from friends in Vegas about lines for gasoline. I read about people in the United States being fearful. I don’t comprehend these feelings.

I feel a sense of loss and loneliness – but not of fear.

On Sept. 17 I write to my parents, “It is so weird being out of the US … it is [as] though nothing really has changed. I do not have any constant reminders of all of the East Coast tragedies and the domino effect.”

It’s Sept. 18, I’m outside the U.S. Embassy in La Paz, Bolivia. I can’t stop staring at our flag at half-staff. I’m told not to hold onto the fence. I’m told I have to get permission to a take picture of the flag. Now I’m angry. It’s my flag.

On Sept. 18 I write a group email saying, “People down here do care. Though it was a bit weird the other day crossing form Peru into Bolivia and waiting in the line at the Bolivian immigration office and having a young shoeshine boy come up and ask me where I was from. The United States I responded. Oh, and then he makes a gesture with his hands of a plane going through a building. I had nothing more to say. A woman with a Netherlands passport in front of me said what a way to greet you. I smiled. She said the tragedy has affected the whole world.”

Mom writes back about the continual pit in her stomach.

To this day it’s something I don’t relate to.

It’s Jan. 2, 2002, and in my journal I write, “On Sunday [Dec. 30] we went to Ground Zero. They opened a viewing platform that day. It was hard to believe that the World Trade Center once stood there. It looked like a construction site. Had there not been other buildings boarded up [and] w/canvas hanging down it would not have been so dramatic. What got me the most were the views from the Empire State Building [and] Statue of Liberty ferry. And on the city map it just has a white space for the WTC – with no written designation. It is still hard for me to comprehend all that the Untied States [and] its people have [and] are going through and perhaps having been in S. America on Sept. 11, 2001, will make it impossible for me to ever grasp the magnitude of the loss [and] fear.”

Previous post : Incline Village focus of Stewardship Day Next_post : Meet some of the LTN team at the Bijou Bash