Caltrans is not backing away from its May 11 start date to close Highway 50 over Echo Summit.

This was the second conference call of the day. 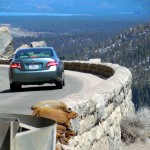 Highway 50 over Echo Summit will be closed May 11 for 10 solid days. Photos/Kathryn Reed

Caltrans promised the highway would be open by noon on the Friday of Memorial Day weekend. Of course, as has been the caveat all along, everything is weather dependent.

The closure for 10 days is so the rock barrier that is crumbling can be replaced for safety reasons.

What had South Shore officials in distress is that it means people coming to the May 15 Amgen Tour de California bike race will need to do a bit of touring themselves to reach the area.

“When all of the factors as we understand them today were weighed, the May 11th start date was considered by all to be the wisest course of action. This, despite the fact that all recognized that a detour during Amgen is undesirable and that we must all work to ensure that visitors know that South Lake Tahoe is open for business and a great place to watch the race,” B Gorman, CEO of Lake Tahoe South Shore Chamber of Commerce, told Lake Tahoe News.

A series of letters between Caltrans and South Shore officials dating to last fall indicate officials should not have been surprised by the start date.

Plus, a series of meetings between the city, Caltrans and chambers took place two years ago. The South Tahoe Chamber of Commerce was making presentations to the City Council as early as August 2009. Caltrans made a presentation to the council the month before.

What does have some surprised is why the tourism agency that represents the South Shore would ever go after the country’s most prestigious professional bike ride for 2011 knowing the main artery to get to the South Shore could be off-limits. Chaplin did not return phone calls.

The summit should be closed for 10 straight days and then opened to controlled traffic for about six weeks.

According to Gorman, Caltrans is updating the reader boards with the actual dates. What the ones at the base of Echo Summit heading west and the one at Johnson Pass Road heading east said the morning of May 2 was “Closed Early May.”

This has some people confused since it is early May.

Orange signs saying “road closed” are up – with the words covered until the work begins.

More information on the schedule and alternative routes to the area are in this story.