The San Francisco Giants have decided to cut Lake Tahoe-Reno off the list of places for the World Series trophy to visit this weekend.

Instead, the website says the trophy will be in the area sometime in March. 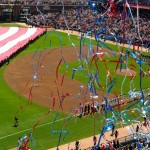 The good news about the Giants is the champs will open the season at against the Dodgers on March 31 at 5pm in Los Angeles.