BRIDGEWATER CORNERS, Vt. – I made the summit of the scenic crescendo on the road bike and instantly saw why we took the optional route on the Bike Vermont October tour.

After leaving 40 years ago, the pilgrimage to my hometown of Woodstock, technically the nearby small bedroom community of Pomfret, involved more than Vermont’s celebrated history. It involved my own. 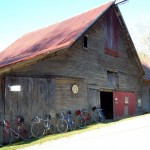 Ready to ride through the Green Mountain State. Photos/Kathryn Reed

We passed the road leading to my childhood home a few miles back, then crested the top of the hill on the first day of the two-day 60-mile bike ride, bringing me face-to-face with Pomfret’s old town hall in the foreground of a drop-dead killer view of red, orange and yellow maple trees in central Vermont’s famous rolling green hills. Across the road, the one-room schoolhouse where I learned to read and write in first and second grades still stands and now functions as town offices. I peeked in the windows and recognized the open front room as my small classroom that resembled something out of “Little House on the Prairie.”

And to think this highlight fell on only the first day of the weekend bike tour out of the Bridgewater Corners-based October Country Inn. The tour is aptly named after the bed and breakfast we stayed in for two nights. Owners Chuck and Edie Janisse, who have run the place off Route 4 for nine years, came on board as the third inn operators after she went on a Bike Vermont tour.

The weekend was nothing less than superb on every front. The inn’s food was delicious, the conversation stimulating, the service genuinely stellar. The setting makes me want to return on vacation to hang out in the immaculately groomed grounds or inside the cute, antique-furnished room.

With a roaring fire, cozy furniture and homey environment, the living room is established as a common space for the 18 people on the tour. We are from all walks of life and regions. It’s so relaxed I take off my shoes as if I’m at home. That’s a sign I belong there.

More than a bike ride

With 34 years under their belt, Bike Vermont owners Larry and Dawn Niles, with their staff and tour leaders, have these trips down to an absolute science. Signups were easy, and the tour unfolded exactly how I expected. In 20 years of serious cycling, I’ve never had such detail on a route map.

Tour leaders Meg Davis and Jim Ortuno provided full explanations of what to expect for the day, including a session called “map wrap.” The duo made it refreshingly obvious how much they enjoy their jobs, each other and sharing experiences with fellow cyclists.

Ortuno, who lives in Shoreham, Vt., where one tour is based, thoroughly embraced the meal Edie and her staff were serving from the kitchen’s apron-donned cook Chuck. The October Country Inn meals follow an international theme, with Friday night’s menu of sole, carrots, salad, pilaf and cheesecake representing a French theme.

“This is why I bike. My wife is a good cook (too). I’d weigh 500 pounds if I didn’t,” Ortuno said, while taking a second helping of the perfectly seasoned carrots.

The next morning’s breakfast will long be remembered for its mini maple scones, which many in our group fought over or bid on because they were so appetizing. But even upon request, the recipe remains closely guarded by Edie.

It soon became apparent that I would actually gain a few pounds on a cycling vacation.

Our charismatic leaders quipped there are “no hills, just gear changes,” on the two routes. Ortuno also assured the group to forget about the recent rains because there are “no bad bike days, just bad clothing choices.”

I was OK with that because after a quick fitting of my Bike Vermont-rented Giant bicycle, Saturday’s first day of touring Woodstock, Pomfret and Quechee was brisk, but sunny. The blue sky after the evening rainfall offered quite a scenic backdrop to the bright foliage, old-time architecture, historic covered bridges and cows grazing on the green rolling hills. A few sightings of wooly bear caterpillars crossing the road are an indication winter is coming to the Northeast.

The start of the ride took us east, over the iron bridge at the Ottauquechee River, which runs through the quaint, historic town of Woodstock. Three covered bridges, including the Middle Bridge in town and the Taft near Quechee, cross the water about 10 miles apart from each other. A word of caution from our bike tour leaders – go slow or walk your bike on the covered bridges.

The 16-mile Pomfret loop provides some of the best “leaf peeping” one can get in New England. The loop empties into Quechee, known for its so-named gorge with views that dramatically drop hundreds of feet into the river. Rafting and fishing enthusiasts can be seen on any given day in three seasons on the river.

Quechee’s lunch stop included hot soup at a busy café and a visit to the gallery of Vermont glassworks artist Simon Pearce.

This is the epitome of how I like a bike tour – beautiful without belaboring the exertion at the expense of the sheer enjoyment of being free from work or without a care in the world. (Plus, I knew Kae would go on another bike tour if it were like this.)

The first day’s 42-mile jaunt had us ending in Woodstock, where the Billings Farm and Museum was celebrating harvest days. The working farm is operated by a nonprofit founded by Laurance Rockefeller, who married Mary Billings, in cooperation with the national historical park where Route 12 and River Road meet. Cows still graze there.

In town, Kae and I hit the Mountain Creamery for homemade ice cream and a walk around my historic, pedestrian-friendly hometown. The sidewalks are packed with tourists. Imagine a place where there are no traffic lights or fast food eateries, but an independent bookstore that has thrived for 75 years.

Karen Greenberg and Steve Pittendrigh of Phoenix end their tour at the Woodstock Inn & Resort with a drink at the bar and massages at the landmark hotel’s new full service spa.

At Saturday night’s Italian-themed dinner in our home-base inn, Greenberg gave a sign she was melting into the dining room chair to reflect her state of mind. The rest of the group got shoulder massages at the table from the two tour leaders. Beyond being a guide and a nurse, Davis is known for her rubdowns.

My red wine and an eggplant Parmesan good enough to write home about added to my restful evening, which included a rousing game of Scrabble in front of the fire. Unbeknownst to Kae and I, cyclist Ann Chilton of New Hampshire – who was on her sixth Bike Vermont tour – has a penchant for the game. She won with a 50-point Scrabble bonus for using all seven tiles.

For those who may partake in a night out for a cold glass of Vermont beer, the Long Trail Brewery – named after the trail that runs through the spine of the state – is located directly across the inn from Route 4.

Day 2 began with silver dollar pancakes and pure Vermont maple syrup, then a ride, as Ortuno put it, “with rested bikes” that took us on an interesting journey through the childhood home of Calvin Coolidge. It was here his father swore him in as the 30th U.S. president. The Plymouth Notch Historic District is nothing short of gorgeous and a reminder of one of Vermont’s primary food groups – cheese.

The Plymouth Cheese Factory is the second oldest continuously operating cheese factory in the United States. I sampled some and liked it a lot. I’m in good company. According to the St. Petersburg Times, chef Julia Child considered Plymouth cheese “her favorite.”

Plymouth is bursting with history. An old Gulf gas pump in front of the general store declared fuel costing 11 cents a gallon.

Relying on my own body fuel, I hopped back on my bike and finished the 18-mile journey along scenic Route 100, where it seemed we stopped every few feet to snap a photo. I didn’t mind. I was taking it all in.

We passed the northeast station of Killington Ski Area, Vermont’s largest resort recognized for often being the first area in the United States to open in October. But no snow was in the forecast. It was just a cruise back to the October Country Inn, where lemonade and dessert bars await.

Bike Vermont offers a multitude of tours, many more ambitious than our 60-mile, three-day October Country Inn weekender. The company tours Maine, Maryland, Scotland, Ireland, Italy and the outer regions of Vermont, such as Lake Champlain.

The October Country Inn weekend tour costs $545 per person in the fall, a highly recommended time to see the foliage. The Scotland tour runs $2,995.

Road or mountain bike rentals with 21 gears may range from $40 to $100 depending on the length of the tour.