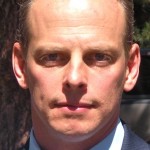 After 45 minutes of back and forth testimony from opposing counsel, the judge didn’t decide if Johnny Poland should be given back his badge to resume work as a South Lake Tahoe police officer.

The city is fighting his reinstatement, which counters the recommendation a three-person panel made nearly a year ago. A former South Lake Tahoe police chief, former mayor and independent arbitrator were on the panel.

Poland, a 10-year veteran of the force when he was terminated in June 2007, is accused of inappropriate behavior during the Nov. 20, 2006, lockdown at South Tahoe High School.

He appealed the decision. The panel ruled in his favor. The city is contesting that ruling. The city has spent close to $100,000 fighting the case.

It is up to El Dorado County Superior Court Judge Steven Bailey to make the final decision. At the court session Sept. 9 he did not indicate when he would rule.

Cynthia O’Neill with Liebert Cassidy Whitmore represented the city in court. One of her biggest arguments is that Poland is a dishonest cop.

“Officer Poland created a false impression a gun was not found,” O’Neill said. She further stated, “Mr. Poland violated the most basic of police duties. He did not collect evidence. He did not tell his supervisor.”

O’Neill’s reference is to the non-operating BB gun that was found in a student’s vehicle that day. Poland did not confiscate it, nor did he immediately tell anyone about it.

She tried to make a case that Poland is a liar and therefore the Brady ruling would come into play.

Brady v. Maryland in part says, “Police officers who lie are often called ‘Brady cops’, because of the Brady ruling, prosecutors are required to notify defendants and their attorneys whenever a law enforcement official involved in their case has a sustained record for knowingly lying in an official capacity.”

El Dorado County Sheriff’s Department recently had a personnel case where the Brady ruling was cited. The theory is that a cop is no good on the street if their testimony is no good in the courtroom.

Even though O’Neill said the county’s district attorney is on the city’s side, Poland’s attorney Steven Welty pounced on that assertion by saying the DA has not been privy to the details of the case and therefore his opinion is warrantless.

Welty said the cases O’Neill cited were irrelevant to the Poland case because they had to do with “bold faced lies” by an officer.

Judge Bailey had the most questions for O’Neill — asking pointedly why the arbitration panel’s ruling was not appropriate. She kept repeating that Poland is a dishonest cop.

A ruling could come any day or weeks from now.