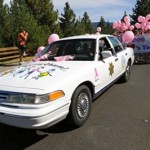 It took expert mechanics at LTUSD to get the Fighting Chance vehicle rolling for the Sept. 6 parade. Photo/Lisa J. Tolda

Because most abductors try to gain the trust of their prey, children are taught in Fighting Chance to keep their distance from strangers.

Emmet Freeman, a junior at South Tahoe High School, went through the training when he was in elementary school. It likely saved him from something terrible when he was a fifth-grader.

A guy about 20 years old approached him, saying he’d lost his wallet. He asked Freeman if he would help find it and even offered him $5.

“My son said no. He got scared, jumped on his bike and pedaled hard,” recalled Angie Keil. “I don’t know what he was intending to do. You don’t know what would have happened.”

Police nabbed the suspect for other offenses, but no charges could be brought against him in the Freeman case because he didn’t do anything to the boy.

One point of Fighting Chance is to educate kids that they should not get close enough to a stranger to be grabbed — don’t take the money, don’t bend down to pet the cute puppy.

Fighting Chance was the brainchild of Brooke Laine when she was a member of Soroptimists International of South Lake Tahoe. It was in the mid-1990s, Laine’s sons were about 4 and 5 years old.

She started thinking about Terry Probyn and wondering how she was going to teach her kids to prevent another kidnapping in Tahoe. She tried to empower them, to explain that they have choices. But then her son, Nick, asked how his friends were going to know what to do.

Laine called Probyn to talk about the idea of putting Fighting Chance together in honor of Jaycee Lee Dugard, her daughter who was snatched from a Meyers bus stop on June 10, 1991, when she was 11.

Probyn is part of the video that is shown to students in Lake Tahoe Unified School District. After Freeman’s experience, he became part of the educational material, too.

On the video Probyn talks about how she is certain Jaycee Lee froze when the kidnappers approached her because she didn’t know what to do.

Seldom are victims randomly chosen. Most perverts stalk their victims, picking the ones they want. This is likely what happened with Jaycee Lee because the suspects’ vehicle was seen in the neighborhood days before the kidnapping.

“I started reading about pedophiles and child abductors. These guys are creepy, disgusting people,” Laine said. “The average child abduction takes less than 5 seconds. These molesters go to church, they sit next to you. They go to the grocery store. They don’t have horns or a big red sign.”

Fighting Chance is taught in grades 3-6. In sixth grade, youths are taught that if the suspect gets out of the vehicle, but they’re locked in, to take a button off a shirt and put it in the ignition.

Kick out a taillight if stuffed in the trunk. Cops in Tahoe know to pull over a vehicle with a busted out taillight just for the reason someone could be in there.

“We did lose a little bit of our innocence, but because of that I think parents keep a better eye on kids and Soroptimist started a Fighting Chance,” said Lt. Les Lovell of the El Dorado County Sheriff’s Department. “The sheriff’s office partnered with them and gave them a car so they can teach escape techniques.”

There is talk of bringing Fighting Chance, which is trademarked by Soroptimist, to younger kids.

Besides the Freeman incident, a couple other local kids were able to escape from some would-be kidnappers at Lakeside Inn at Stateline because they had seen the Fighting Chance video the day before the incident.

A couple years ago two girls walking in the Bijou area were approached by someone in a van who wanted to talk to them. They knew to stay far enough back so they couldn’t be grabbed. They also got a full description of the vehicle when it circled back by them.

Laine said it’s important for parents to not be afraid to talk to their kids about the scary things that are out. The most important thing is to give them the tools to get out of threatening situations.