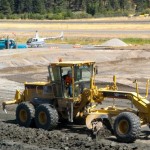 A pilot watching the construction at Lake Tahoe Airport on Friday said the ramp was so bad you could lose an airplane in one of the holes.

Although that sentiment is a gross exaggeration, the truth is the state of disrepair was so bad that pilots would avoid the area for fear of having asphalt sucked into an engine.

A $2.5 million grant from the FAA is paying to for the terminal ramp area to be resurfaced with concrete. The work is expected to be finished by the end of October.

“The asphalt (was) in extremely poor condition, making it hazardous for aircraft to transfer across the ramp and park at the ramp,” said Sherry Miller, airport director.

Besides the ramp work, a de-icing system is being installed.

“There was some question whether we needed this or not because we don’t have commercial service and the smaller planes don’t like to leave in winter weather,” Miller said.

The couple of planes that are de-iced each year use a mist system that Miller said does not reach the ground and therefore didn’t present a contaminant issue for the nearby Upper Truckee River.

The new system with have an oil-water separator.

With the FAA paying for the system, now seemed a good time to install the de-icer while the area is a construction zone.