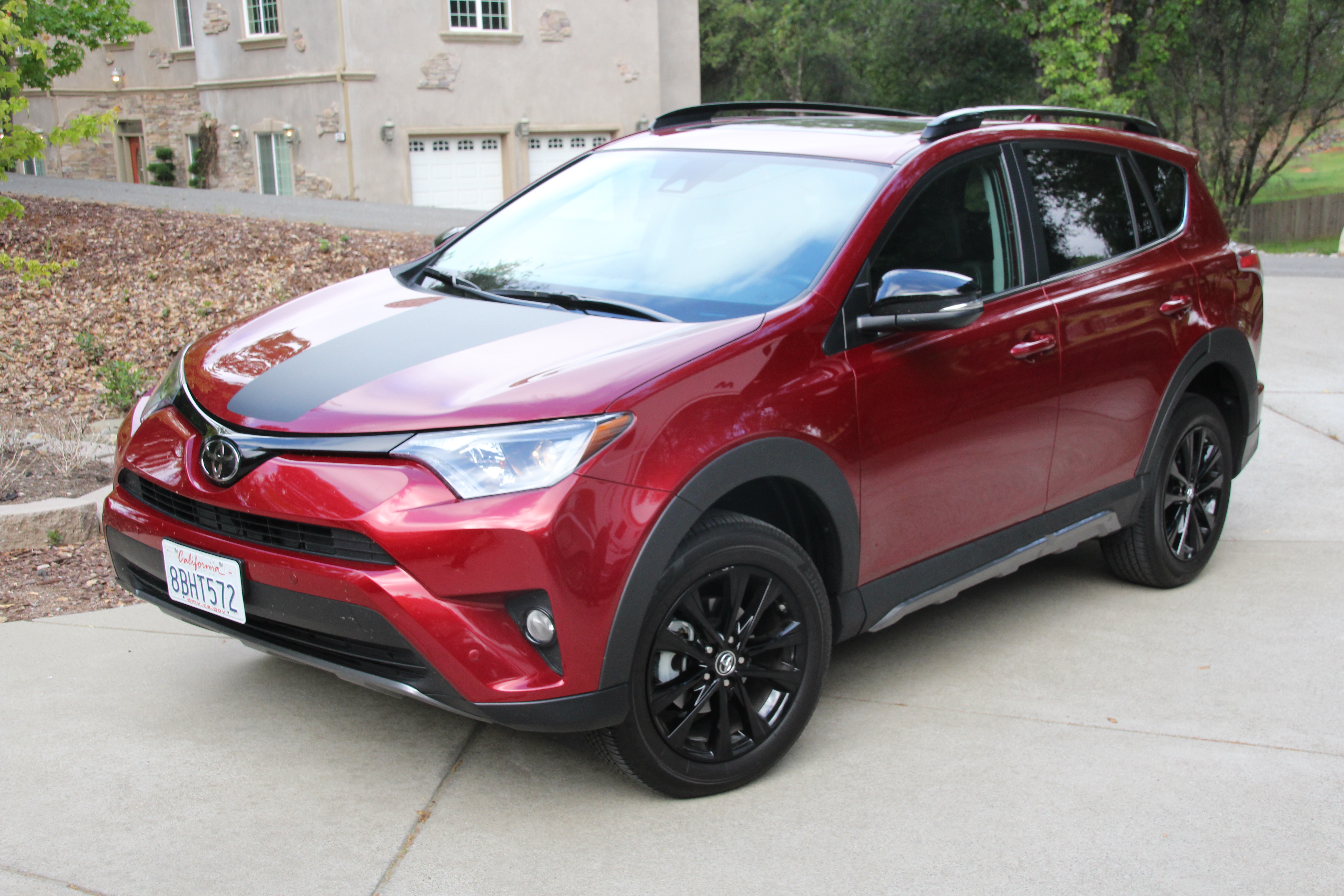 When I last wrote about the Toyota RAV4, it was still trailing the Honda CRV in the very popular compact SUV/CUV category, where the CRV outsold the RAV4 by about 5,000 units in 2016. Bear in mind the CRV was a total redesign for 2016 and the RAV4 was in its third year of its current generation. Fast forward about 15 months and the tables have turned despite the RAV4 now being in its sixth year of this current generation four. And those numbers are as recent as March when the RAV4 outsold the CRV by 3,000 units nearly outselling Toyota’s new fabulous Camry, falling short by just 300 units.

So how does Toyota do it? By making a super competent and capable, properly sized good-looking rig that does it all. My test ride for the week was the AWD Adventure model which came with some cosmetic paint touches like the blacked-out hood center line and heavy duty rubberized floor mats.

Sized right at 184 inches long and 73 inches wide on a 105-inch wheelbase, the RAV4 sports a cavernous cargo capacity of over 73 cubic feet behind the first row and almost 40 cubes behind the second row of seats. It is a big compact CUV volume wise.

Besides the hybrid choice, there is only one powertrain, Toyota’s 2.5L inline four bangers with DOHC and 16 valves pumping out 176 hp at 6,000 rpm and 172 pounds of twist at a low 4,100 rpm. It drives all four wheels via a six-speed torque converter auto cog swapper. Pretty conventional stuff. But it works well as it powers this RAV4 to 60 mph in a respectable 8.28 seconds. Passing numbers were equally capable with a 50-70 mph run taking 4.62 seconds and the same run up a steep (6-7 percent) grade slowing that time to 7.53 seconds. While not quite as good as the powerful hybrid version, it was marginally improved over my 2014 test which had numbers of 8.51, 4.57 and 7.73 seconds respectively. My hybrid test from a year ago had better numbers of 7.08, 4.09 and 5.95 seconds. 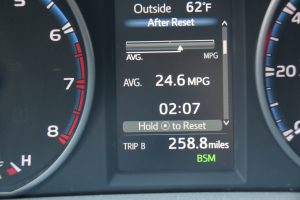 Fuel economy as rated by the EPA test cycle is 22/28/25 city/highway/combined. Fuel economy was almost identical to my previous RAV4 with the same powertrain. This RAV4 averaged 32 mpg on a level highway at 70 mph and overall averaged between 24 and 25 mpg with no time spent on the highway except for the fuel economy run. Now this is where it gets interesting.  The Hybrid RAV4 is rated at 34/30/32 and averaged 32 mpg overall and between 33-34 mpg on the highway with the big improvement coming in suburban driving, about 5-6 mpg. Not only did the hybrid perform better by a significant amount, get this, it cost about the same as this Adventure, stickering for an almost identical number, both about $33 large.

Good handling is in the cards as the RAV4 has the credentials, 18 x 7.5-inch alloys, big 235/55 series tires, quick 2.68 lock to lock electric power steering rack, MacPherson struts up front and a double wishbone set up holding up the rear and stab bars at both ends. It devourers corners without a top-heavy feel, even with the high belt line and turn in is crisp. Handling is sporty with very good grip.

Ride quality is quite pleasant and the quiet is noticeable. Engine speed is a reasonably low 2,200 at 70 mph. There is no road, engine or wind noise. It has a ride like you would expect from a sporting sedan only it does much better on bigger bumps.

Headlights are very good in both low and high beam and auto high beam is standard, a great feature. Four-wheel disc brakes (front ventilated) are strong and of course all the acronyms are present with a complete compliment of Toyota Safety Sense.

Inside is a Toyota quality heavy duty cloth interior and the seats are comfortable. Rear seat legroom is spacious. Instrumentation is complete with a trip computer flanked by a speedo and tach. Sound system is fairly straight forward, no mouse to make you crazy. But there is one annoying issue with the instruments, they are hard to see unless it is night when they are backlit. Even with the panel lights on during the day, the panel is hard to read. Work on that Toyota.

As mentioned about, cargo space, shape and volume are huge. This ride would dangerous at a Lowe’s or Home Depot.

Pricing for this Adventure AWD is $28,400 plus the train from its Woodstock, Ontario, Canada, assembly plant. Among the few options one, Premium Packaging is a deal as it has an effective price of $1,550 and you get some great goodies such as NAV, Smart key, power lift gate, trick audio, blind spot detection and so much more. It’s a no brainer. The $1,080 Cold Weather package plus some other odds and end brought the price of admission to $32,990. Not bad for a fairly serious AWD CUV. Remember the hybrid version is about the same price and that becomes a no brainer.