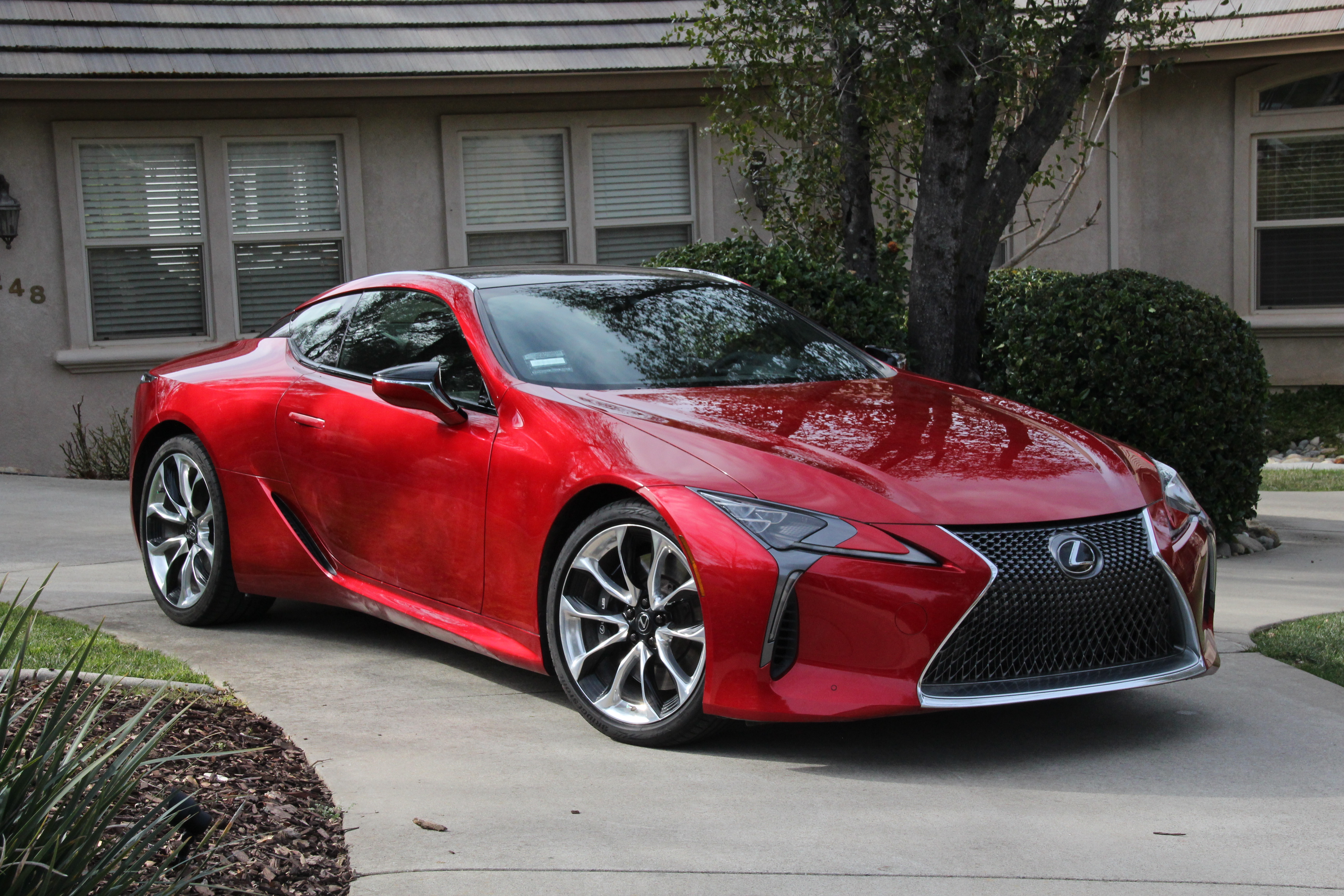 Not enough superlatives for the 2018 Lexus LC500. Photos/Larry Weitzman

When I wrote my Road Beat review of the Lexus LC500h a few months ago, I was mistaken when I called it perhaps the best car I have ever driven. It’s only second best. That title of best car I have ever driven now goes to the “plain Jane” LC500 which coincidentally lists for about $5,000 less than the 500h version. The base sticker of the plain Jane 500 is just $92,000. When you consider the quality and performance, it becomes a virtual bargain among super cars. LC500 is the very best.

LC is a fabulous looking car, perhaps the best work ever for Lexus. It’s low, sleek and aggressive with a Coke bottle fuselage, floating roof line, strong hips and shoulders and rippling with muscle which it surely backs up under the hood. Co-efficient of drag is a not so low 0.33, mostly caused by spoilers so it has plenty of downforce. Size-wise, it is a small midsize car with an overall length of 187 inches riding on a very long 113 wheelbase. And if it looks wide, it’s not your eyes as its beam stretches across 76 inches. However, it looks deceivingly low, but its not at 53 inches.

Powering this not so plain Jane LC500 is the Lexus 5.0L, DOHC, 32 Valve V-8 with all the bells and whistles cranking out 471 of the sweetest horses (at a sky high 7,100 rpm) ever found at a race track, quarter horse, thoroughbred or Indianapolis. Peak torque of 398 pounds of twist occurs at 4,800 rpm. More on torque later.

Power is transmitted to the rear wheels via a 10-speed direct shift tranny which shifts like a dual clutch only smoother. While it has ten speeds its still not a close ration box as the top three gears which are all indirects would never be used on the race track. Matter of fact, on the track you might never get to sixth. 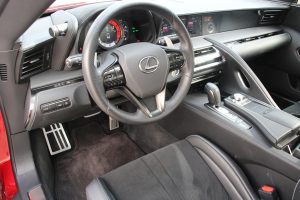 Performance is not just amazing, it’s the quickest car the Road Beat has ever tested. And this is a car for the driver who wants the most out of his motoring. It is performance motoring at its absolute finest. Zero to 60 mph arrives in less than 4 seconds at 3.91 seconds. Passing simulations from 50-70 mph takes just 1.88 seconds on level road and just 2.20 seconds up a 6-7 percent grade. LC500 truly defies the laws of gravity and certainly Newton’s first law which is a body at rest tends to remain at rest and a body in motion tends to remains in motion.

Just starting this car will boil your blood as it is the sweetest sounding V-8 ever. The burble and sound are mesmerizing. The throttle blips on downshifts and it spits and barks during upshifts. Under hard throttle there is at least a uniform 1,000 rpm drop between each upshift as the engine momentarily has its ignition cut and its as if rpms are matched perfectly. It’s so, so charismatic with real engine dynamics that you learn to use. And it sounds like it has exhaust cut-outs under hard throttle. It’s a most beautiful thing and it is the best sounding engine ever. It is the MOST fun you can have in a recumbent position. I hear an F-16 is close competition, however.

The midrange is brilliant around 4,000 rpm when you get a giant torque swell. Remember that monster torque at 4,800 rpm. I could wax on, but by now you get the message.

Fuel economy, considering its world class and super car performance is quite good, even better than its EPA rating of 16/26/19 mpg city/highway/combined. At 70 mph with the engine spinning just 1,450 rpm the LC500 averaged 33.1 mpg in a two-way run on a level highway. Overall in 450 miles, including dozens of full throttle sprints and some high-performance road trashing it averaged 22 mpg. On balance, those are Prius like numbers. And if you like to cover hundreds of miles in a single bound, this is your ride as it has a nearly 22-gallon gas tank.

Next in the LC500 arsenal of an ultimate car is its handling. Quick electric steering (2.6 turns lock to lock) is beautifully weighted and very direct although it could have more feel. Suspension is a state of the art multilink system in all four corners and its huge 21-inch wheels are shod with 245/40 and 275/35 series rubber (front and rear) acting like vice grips on a copper pipe. And its brakes are turkey platters at 16 and 14 inches plus six piston and four piston calipers. All of these components plus brilliant design make this LC extremely easy to change directions at speed. Almost anyone above room temperature can make this Lexus perform like a GT race car at Nürburgring. It becomes so easy to place the LC in the twisties and picking the right line, that anyone can shine in the LC, besides the fabulous finish.

Ride quality is another super suit. This car is smooth, no matter the surface and its body is bank vault tight and strong. It is also quiet when not into the throttle.

As to safety, I already mentioned the brakes, but it also has every other acronym. But most its important safety feature is this car’s capability. Headlights are fantastic.

As you would expect, interior quality is phenomenal. The best leathers and finishes. There is one negative and that is the mouse system to control the radio and other functions. Please go back to knobs and buttons. And it has a trunk, nearly 5 well shaped cubic feet. It looks bigger.

Believe it or not, the basic LC500 V-8 starts at $92,000. Among the competition, this is the bargain of a lifetime. Imagine a $92,000 car being a bargain. It flat out is. My tester had about 10 grand in options including a $1,220 Mark Levinson sound system. It would be worth it, if I could use the sound system. The Sport package includes a carbon fiber roof and the premium Infrared paint is another $595. All toll with the obligatory $995  for the boat suite for the cruise from Aichi, Japan, my ride totaled $102,890 which is about the same price as the LC500h tested a few months ago. It’s a tough call, but either choice will leave you breathless, but hopefully not penniless.