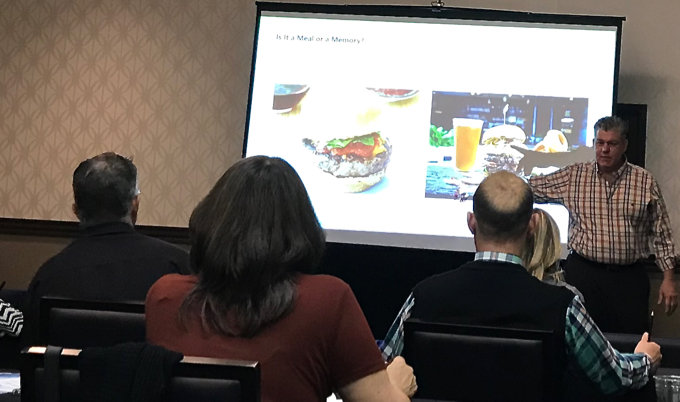 Erik Wolf talks about how food tourism can be a bigger draw for Lake Tahoe. Photo/Kathryn Reed

STATELINE – Food. It’s what matters to many travelers. But it’s not a reason to visit the South Shore – not yet, any way.

The importance of being a culinary destination was illustrated during a presentation last week by Erik Wolf. He is the executive director and founder of the World Food Travel Association. Besides being a keynote speaker during the annual tourism forum hosted by the Lake Tahoe South Shore Chamber of Commerce and Lake Tahoe Visitors Authority, he then led a break-out session just about food service.

Lake Tahoe, especially the south end of the lake, as a whole has nothing to brag about when it comes to cuisine. Wolf said this is a shame considering 25 percent of visitor spending is on food and beverage. He lumps libations – which doesn’t mean it’s alcoholic – into the overall food component.

Food tourism, Wolf told the audience at the Hard Rock on May 10, is like an attraction, it has the ability to get people to share with others and then inspire those people to experience it.

“Food tourism is something that is unique and memorable. People take home memories and then their stories are told,” Wolf said. “People want to experience what’s local.”

He said it’s about selling a lifestyle.

People think just serving a good meal is food tourism. Wolf said that is so wrong. In the break-out session he showed a picture of two hamburgers with the question – Is it a meal or a memory? One was rather an ordinary burger on a plate. The other was a burger loaded with toppings well beyond lettuce and tomato, along with onion rings in a separate container that was artistic in its presentation, along with a beer.

The group agreed the second photo was memorable.

No matter what a destination’s primary attraction is, there is no arguing everyone has to eat and drink. That is why food tourism should be part of the equation – especially in a place like Tahoe where tourism is the No. 1 industry.

Tourism is also a huge part of California’s tourism. According to stats released this month by Visit California, “California’s robust tourism economy expanded in 2017, fueling more than $132 million in travel spending, $10.9 billion in tax revenue, and 1.1 million jobs in communities across the Golden State. The report’s findings show tourism spending jumped 4.8 percent in 2017, signaling the industry’s eighth consecutive year of growth.”

Wolf’s assessment of the South Shore is that it is an emerging food destination, with work still needed before it registers on the radar of food travelers.

“You have opportunity,” Wolf told the group.

What he liked when driving through the area is that there are not a lot of chain restaurants. While they have their place, Wolf said, they are not a reason someone will choose one locale over another.

Destinations can distinguish themselves by touting locally grown, offering something unique, being creative, featuring chefs, having a unique product and so much more. It could be as simple as experiencing a traditional afternoon tea as is common in London or taking a cooking lesson while in Beijing.

Service is part of that memorable experience. Tahoe has plenty of room for improvement in that category.

Most people don’t make all of their food/beverage decisions before they leave. That is why it is important for local outlets to have a rapport with frontline staff visitors might be interacting with to get recommendations.

Wolf said the No. 1 complaint of Europeans is the breakfast served at hotels – powdered eggs, a lot of sugary items – including boxed cereal, and bruised fruit.

Millennials are who the food industry needs to be focusing on because by 2020 they are expected to account for 50 percent of all travel spending. They are sharing their experiences before they even leave the bar/restaurant. Word of mouth is how people decide where to eat and drink.

“Every visitor to Tahoe can be a future ambassador,” Wolf said.