Cleaning up the groundwater contamination at the Y area of South Lake Tahoe is moving at a glacial pace.

And while more than 60 people last week attended a meeting at Lake Tahoe Airport about PCE, or tetrachloroethylene, not much new was presented by the three water agencies affected by the solvent nor the regulatory agency responsible for overseeing the cleanup. 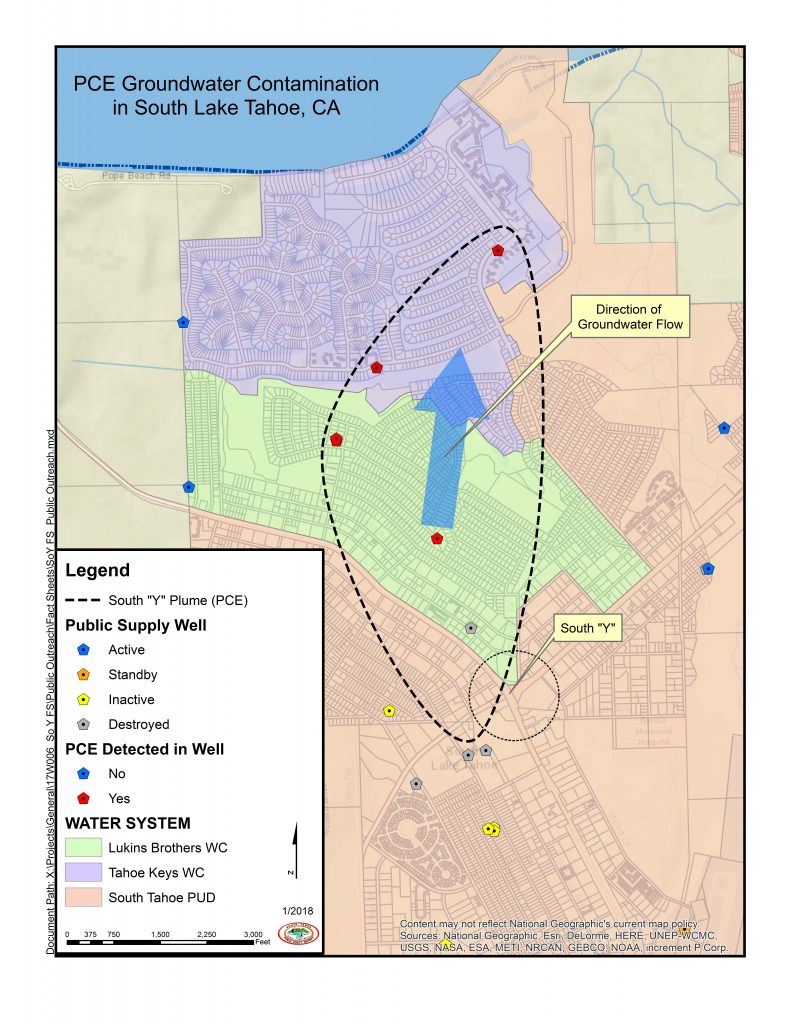 The arrow designates the direction of the PCE plume, while the circle is the area it’s believed to be in. Map/STPUD

Representatives from South Tahoe Public Utility District, Lukins Brothers Water Company and Tahoe Keys Water Company all gave a spiel about the contaminant. Also at the meeting was Lahontan Regional Water Quality Control Board members. That state agency is responsible for determining who is responsible for the contamination, the cleanup method and overseeing that it is done.

While PCE has been written about for years by LTN and has been a known issue in town for decades, the plume continues to percolate beneath surface, polluting the groundwater. Remedies have been elusive.

Instead, the water companies have each had to shut down wells. Lukins is getting some of its water from STPUD.

Nothing new came out of the meeting. For the public, it was an opportunity to have all of these agencies in one room answering questions.

It was stressed by everyone that what flows from the spigot from each of the water purveyors is safe. There is no PCE in the water being delivered to any customer serviced by these three water companies. Someone would have to be regularly drinking PCE contaminated water for 70 years for there to be health risk, according to Lahontan.

It is believed PCE got into the groundwater from a dry cleaner at the Y. It is also used as a degreasing agent. It’s heavier than water, so it sinks.

“Because it is not soluble in water, it can be more easily removed,” Richard Solbrig, STPUD general manager, said at the meeting.

Nonetheless, it hasn’t been removed. This in part is because the culprit, while identified as the Lake Tahoe Laundry Works, may not be the only contributor to the problem. Then the state has been slow in mandating action be taken.

The status today is that a consultant is putting together a feasibility study.

Sachi Itagaki, an engineer with Kennedy/Jenks consultants, said her firm will be looking at alternatives for soil and groundwater remediation, how to dispose of the contaminant, coming up with what needs to be built to remove the product, and establishing a cost to build whatever is needed as well as the operating expense. An implementation plan is also part of the contract.

The report should be done this summer, with another community meeting likely to take place then.

Cleanup will be done vertically and laterally.

In the meantime, the three water companies are working together and independently to ensure their product is safe as the toxic plume continues to hover in the Y area.