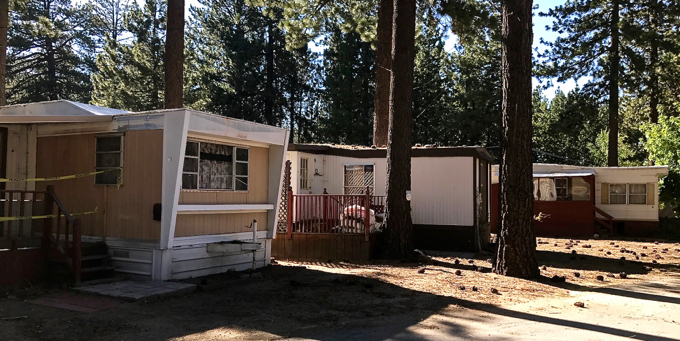 A few dozen South Lake Tahoe residents have been removed from their affordable housing units so more tourist accommodation units can be erected for a project that isn’t even permitted.

The owners of Hotel Azure, who live in San Francisco, also own the mobile home park behind that property along Rufus Allen Boulevard. Today it is a skeleton of what was once a low key housing area. The trailer park has been vacant for about four months.

“There were only about six tenants left prior to closing. All were bought out at fair market value and agreed to sell,” Rich Bodine, director of operations for the hotel, told Lake Tahoe News.

Where they went is unknown.

The people living in the trailers were renting space from Azure, which used to be called Inn by the Lake.

The plan is to put tiny houses on that land. But instead of them being available for residents, they will be a variation on hotel lodging. They come premade and will be placed on a concrete slab.

“It will give them a sense of renting a home, but still have amenities of a hotel,” Bodine said. The company wants to compete with the Airbnbs of the world.

Bodine predicted everything will be in place by 2019. First up, he said, is getting the infrastructure in place.

Really, the first step is getting the permits.

According to Tom Lotshaw with the Tahoe Regional Planning Agency, “… in 2013 the owners of the mobile home park submitted an application to subdivide the existing mobile home unit spaced, but that application had issues and has been on hold ever since.”

The city doesn’t even know about these plans.

“The Development Services Department is not aware of the project and there is no pending application proposing such a project,” South Lake Tahoe planner John Hitchcock told Lake Tahoe News.

With no project even being considered by the regulatory agencies, that 2019 date could be farfetched, and it means local residents could have still been in their homes.