By Zack Bradford, Tahoe In Depth

Winter snow is a welcome sight at Lake Tahoe, particularly since four of the last five winters were exceptionally dry. But as much as we all enjoy skiing or riding and as much as our towns depend on winter tourists to keep our economy going, there is a hidden cost to a return to winter: stormwater, and the pollution that it transports into Lake Tahoe.

Lake Tahoe is designated an outstanding national resource water by the U.S. Environmental Protection Agency, affording it protections that most lakes its size don’t have. EPA, however, also lists Tahoe as “impaired” by fine sediment pollution and an excess of the nutrients nitrogen and phosphorus. Both are carried into Lake Tahoe when rain and snow washes off Tahoe’s roads and parking lots. Unlike grains of sand, which sink, fine sediment particles — each smaller than the width of a human hair — remain suspended in the lake, reducing its clarity. Plants need nutrients to grow, but excessive nutrients fuel the growth of algae.

Under federal law, Tahoe’s special status requires agencies in the basin to reduce the inputs of these contaminants and restore Lake Tahoe to its historic clarity. When Charles Goldman began dropping the Secchi disk in the lake in the 1950s, clarity reached over 100 feet in depth. It worsened over the decades, but for the past four years, the Tahoe Environmental Research Center’s clarity measurements at the center of Tahoe have been better than any other year in the previous decade. It’s no coincidence that these same four years were a record drought. 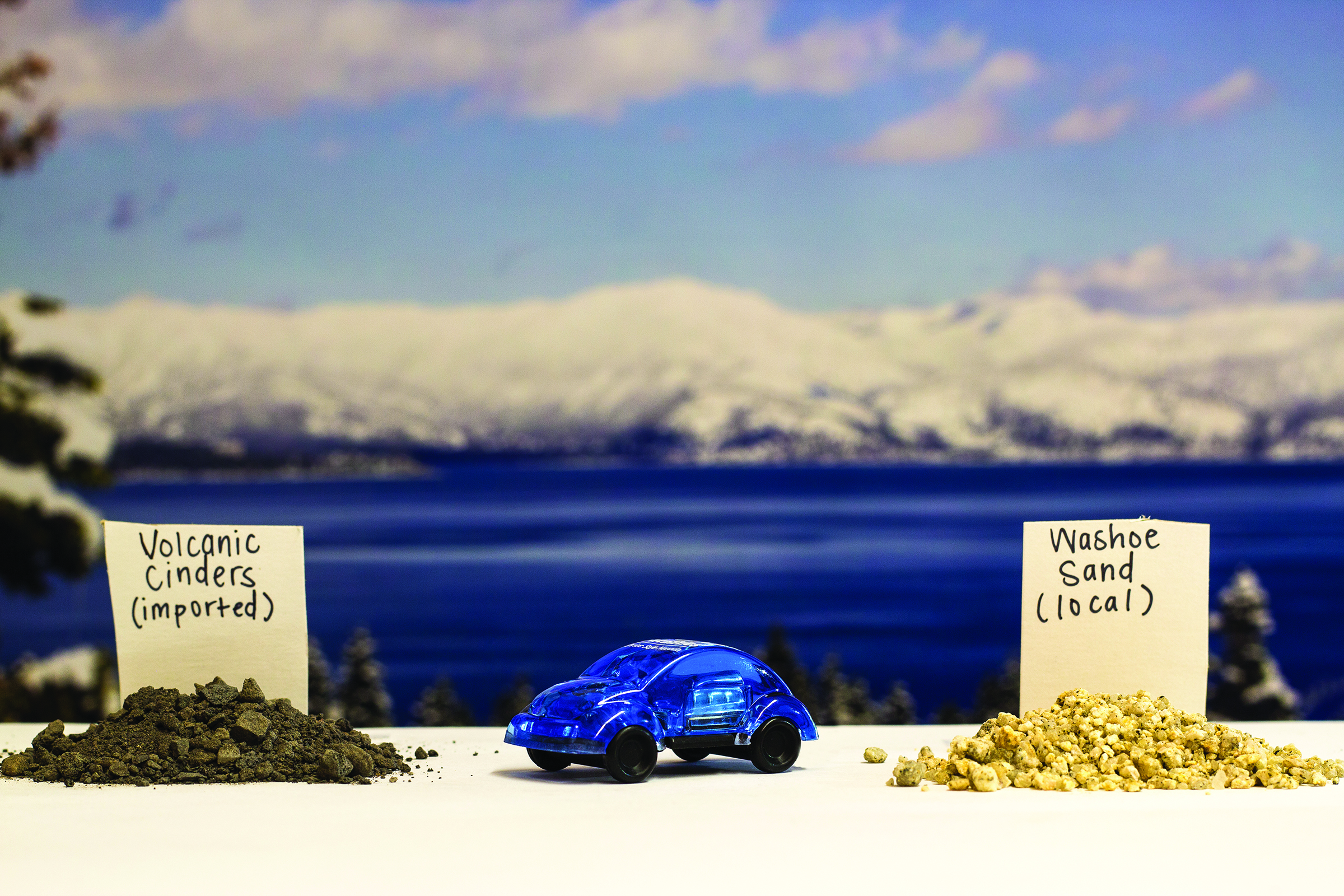 Many Tahoe agencies have begun to change the treatment they use to treat snowy roads. Illustration/League to Save Lake Tahoe

So, what can we expect when Tahoe again experiences above-average winters, with accompanying stormwater transporting these pollutants to the lake? Many agencies at Tahoe have been preparing for that scenario.

From engineered stormwater “infiltration basins” on the South Shore, to curb and gutter projects on the West Shore, agencies have been acting to reduce the amount of fine sediment coming off our urban streets, roads, and developments. But the biggest impact, perhaps, has been made by agencies modifying their road sanding practices.

Scientists have found that road traction abrasives, or road sands, are responsible for the vast majority of fine sediment ending up in Lake Tahoe. Road managers apply abrasives in the winter for public safety to provide traction for vehicles traveling on snowy roads. These traction materials are crushed by our car tires and ground into clarity-degrading fine sediment.

Staff from state and local public works departments balance public safety and the environment by monitoring and analyzing storms, applying road salts at precise times, and spreading road sands in precise locations before temperatures drop. They also sweep up road sands after storms. The improvements they’ve made over the past decade have been challenging.

One major change has been to switch, over the past five years, from a material known as “volcanic cinders” to “Washoe sand.” The cinders are a brittle volcanic rock that cars easily crush into an ash-like dust, while the sturdy grains of Washoe sands can withstand more abuse. Washed into a body of water, more of the finely crushed cinders remain suspended, while the larger and heavier grains of Washoe sand sink harmlessly to the bottom.

Research conducted by El Dorado County and Caltrans showed that switching to Washoe sand could reduce ultra-fine particles, those most responsible for clarity loss, by as much as 90 percent.

Agencies have also taken steps to improve efficiency in applying these road abrasives.

“Our drivers now focus on spot sanding at key intersections, steep areas, and critical public safety areas,” said Jason Burke with the city of South Lake Tahoe. Caltrans now relies more heavily on weather forecasts, and has installed vehicle sensors to measure road temperature. Both Caltrans and El Dorado County have also begun treating roads with a brine solution, which lowers the freezing point of the road, as a potent ice-prevention step before storms arrive.

“The brine technology allows the county to prevent ice buildup, use less salt, and be strategic in placement of road sand,” said Russ Wigart, stormwater coordinator for El Dorado County.

South Lake Tahoe also engages in what Burke calls a “combined effort of refined sand application and enhanced street sweeping after storm events to recover traction materials as soon as feasible.” The city recently purchased new spreaders to enable the use of brine on city streets for the first time this winter.

“Brine use reduces the bounce and scatter typical when dropping dry sand onto the roadway,” said Burke, allowing the city to reduce the amount of sand it needs to apply by 30 percent.

The results of some of these changes have been encouraging. Caltrans’ Sean Cross reports that “water quality monitoring and testing have shown reductions to fine sediment particles,” while Wigart said “the concentrations of fine sediments in urban runoff appear much cleaner.” The real impact though, may not be known for several years, as it takes time for sediment to reach the center of the lake where TERC takes its clarity readings.

So, what can community members like you do to protect Lake Tahoe?

Slow down when driving in winter conditions and bring your vehicle to the car wash more frequently to reduce the spread of roads sands trapped under your car. Residents and business owners can also use less salt, and encourage private snow removal companies to switch to Washoe sand instead of cinders.

Reducing the number of cars on the road can reduce the fine sediment pollution that threatens Lake Tahoe’s clarity. Community members can help by carpooling, and riding the bus and ski shuttles. Little steps add up, and together our actions can help protect Lake Tahoe.

Zack Bradford is the natural resources manager for the League to Save Lake Tahoe. He manages Pipe Keepers, a community-based volunteer monitoring program that examines stormwater entering Lake Tahoe and its tributaries, and Eyes on the Lake, a volunteer program to help prevent the spread of aquatic invasive plants in Tahoe’s waters. This article first appeared in Tahoe In Depth.