Sweet woodruff is spreading, with tiny white flowers blooming. The yarrow is going nuts. The salvia is strong and the maple is happy.

Those are the sentiments of landscaper Brian Hirdman about the plants in my yard.

“This is what I aim for every year,” Hirdman said as he surveyed the work he did last year.

The growth since last August has been phenomenal. The mounds shrunk a little, which was to be expected. Nothing died, though a couple items that were transplanted look a little sketchy. Hirdman bent them – soft, not brittle, as well scratched a bit of the bark to reveal green – meaning it’s alive even though it doesn’t look like it.

I went through South Tahoe Public Utility District’s turf buyback program last summer. I took out all of the grass and then had Hirdman work his magic. 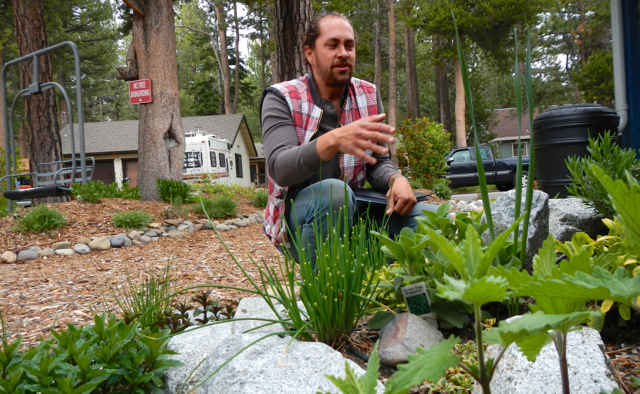 Brian Hirdman talks about what to plant to fill in the herb garden. Photo/Kathryn Reed

He was like a proud dad walking through the front yard last week. A smile never left his face. Looking at every plant, he marveled at the success.

“Your catmint exploded. You will have some beautiful purple flowers coming up soon,” Hirdman said.

The Shasta daises are taller than he would have expected this time of year.

As the snow was melting and things in the herb garden started to come to life, I would eat a little of the plant to determine if it stayed. There’s probably a more scientific method, but this worked.

I have a few holes to fill in because not everything is a perennial. Cilantro and basil for sure will be planted. Hirdman reminded me to plant those so they aren’t getting the intense sun.

The chives have already been prolific. The catnip has been a delight for my friends’ cats. The mint is doing well, I just haven’t done anything with it.

I’d like to think every year I’ll get morels in this spiral herb garden, but that is doubtful. I’m savoring the two I found in there. 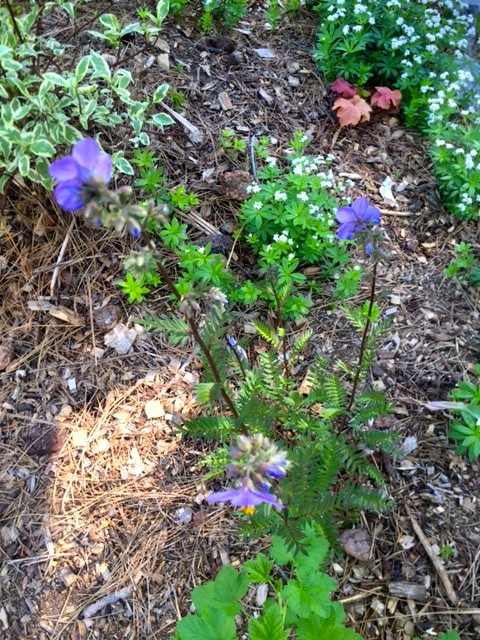 While it’s still possible to get a late frost in Tahoe, any time after June 1 is usually OK to plant.

Something the herb garden didn’t have last year is salad greens, which Hirdman highly suggested. He even said tomatoes would do well in the hugel mound closest to the property line because of the amount of sun it gets.

“As for the irrigation, the way I tell if I need to turn it on is if I move the soil around, like dig an inch or 2 below the surface of your mounds. If it’s still wet, which it should be with the mulch that’s on the mounds, then I hold off turning on the irrigation,” Hirdman said. “If it’s looking dry, I turn it on. Also, the plants help me judge that too, cause I’ll pay attention to see if any of them begin to weep. If only a few weep, I’ll spot water until the majority of the garden needs water, then turn on all the irrigation.”

The whole point of the turf buyback is to use less water. Which I have. And I have a full rain barrel right now that will cover any spot watering I need before the sprinklers are turned on.