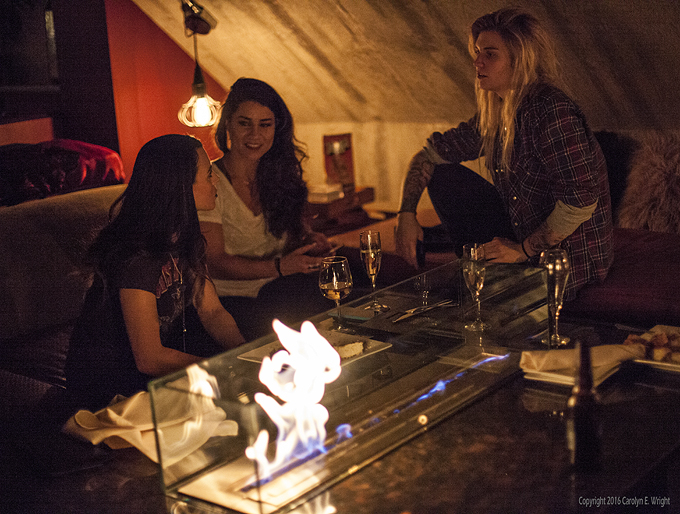 Whatever your plans were for tonight, you need to change them. Go to The Loft. Drink, eat, see the show – do all three or any combination. It’s that good.

Owner Paul Reder has redefined what going out in South Lake Tahoe is all about. There is nothing else like it in town or even across the state line. 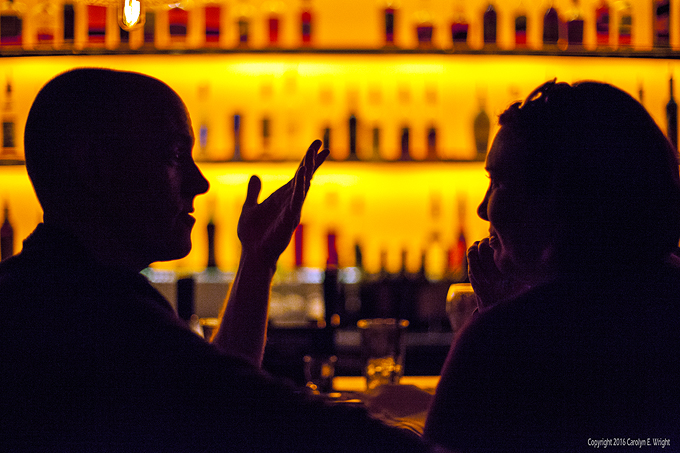 Energy oozes from The Loft – it’s intoxicating without ever having taken a sip of alcohol. People are relaxed on the comfortable couches, enjoying one of the many specialty cocktails as an electronic beat vibrates through the room.

While the music is hard to miss, it’s not so pronounced that dinner conversation is a problem. 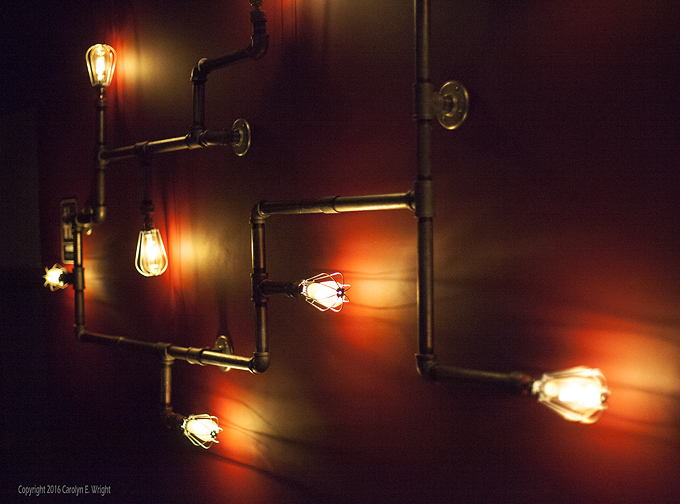 It took about $1 million to transform the vacant area in the Heavenly Village into what has already become a destination for locals and tourists.

“It’s so different from any place in Tahoe,” Kelsey Adams said as she enjoyed drinks with two friends from South Lake Tahoe. This was her eighth time to The Loft – and it’s only been open since December. “It feels classy, but it’s very comfortable. You don’t feel like you are in South Lake Tahoe when you come here.”

“The ambiance is magnificent,” her friend Christina Wiseman added.

They were there for Lipstick Thursday. Wear lipstick – no matter your gender – and the discounts start adding up. Most days of the week there is a special that involves discounts on food and beverages. 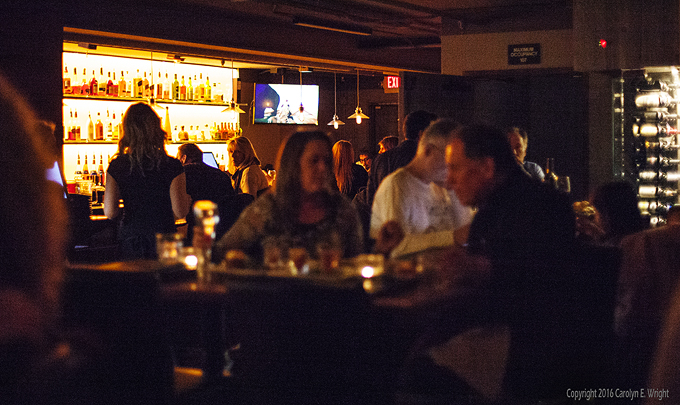 Jim McGowan and Naomi Chianese came up from Napa to experience The Loft. Sitting at the bar the two enjoy a drink. They rave about the grilled cheese dippers on the appetizer menu.

The liquor bottles are backlit in a yellow-orange light that casts a glow onto the area that allows bartender Nicky Lipovsky to see what she is doing.

Chef Lisa Devincenzi-Miller, who owns Capice in Round Hill, has created a menu at The Loft that embraces her family’s roots that go back to northern Italy. The food is rich, with butter being a dominant ingredient. It’s served hot, seasoned perfectly and delivered with quality service not often found at Tahoe restaurants. 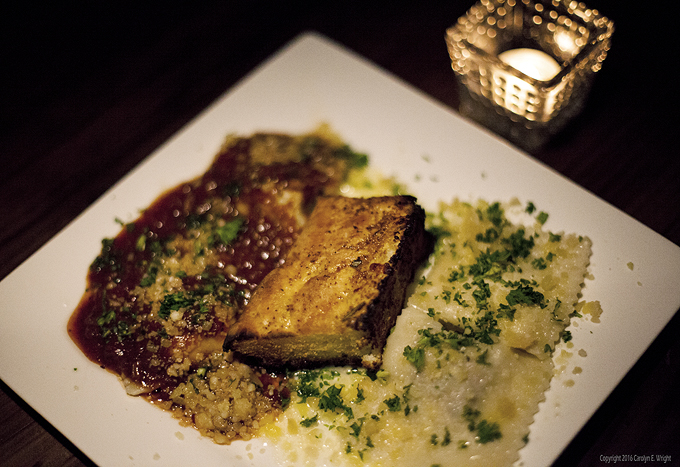 The ravioli sampler is a great start to a delicious dinner. Photo Copyright 2016 Carolyn E. Wright

The menu is divided into Appetizers, Salad, Soup, Pasta, Risotto Bowls, and Kids. The ravioli sampler is worth splitting. It’s possible to get ones filled with cheese or sausage, then covered in butter and cheese, and/or marinara sauce. This sauce is better known as the chef’s prized gravy.

This gravy is what covered Bob’s lasagna.

“The pasta is perfect and that is hard to do. The chef knows what she is doing,” Bob said. Plus, he liked that it was not too cheesy and that there was plenty of meat. 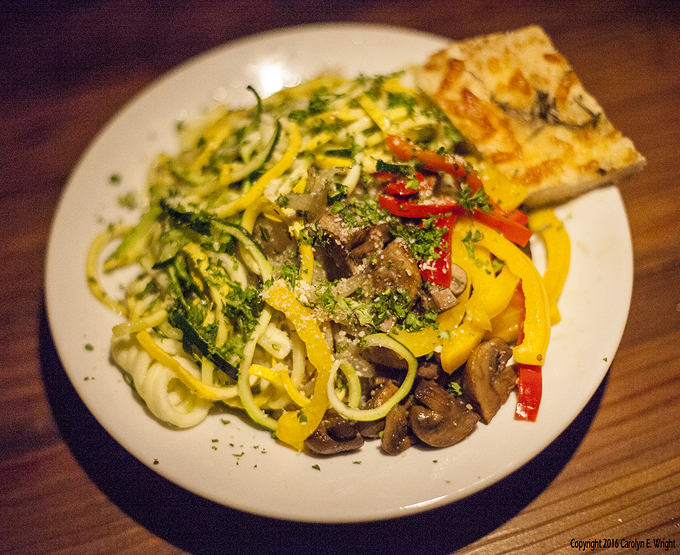 This was one of the best risottos I’ve ever had. So often I’m left wondering where the vegetables are and if I just consumed a block of cheese. And while this was rich, there was also a lot to it. It would be easy to just order this and no starters and still be satisfied. A long grain is used, which is traditional for the region of Italy from which the chef hails.

The Bolognese came with the same spicy sausage that were in the ravioli, which Carolyn said was delicious. 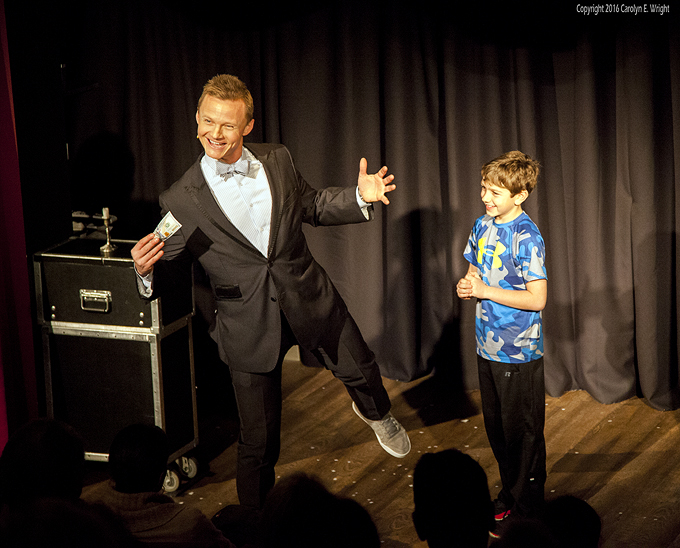 Reder has been bringing Fusion magic shows to the South Shore since 2003. He and Tony Clark are the producers of Magic Fusion. Clark was the first to perform in the 107-seat showroom. Now a mix of magicians will dazzle patrons.

It was built specifically to showcase slight-of-hand magic. The only place like it is in Hollywood at Magic Castle.

Reder, though, also wants it to be a venue for artists to unplug – where he creates an intimate experience for performer and guest. On other nights disc jockeys might spin tunes after the magic is done for a little after hours fun.

Author James Van Praagh is booked for the summer to give a talk. The Kinsey Sicks will be in town in July. A local version of Ted Talks is also planned. 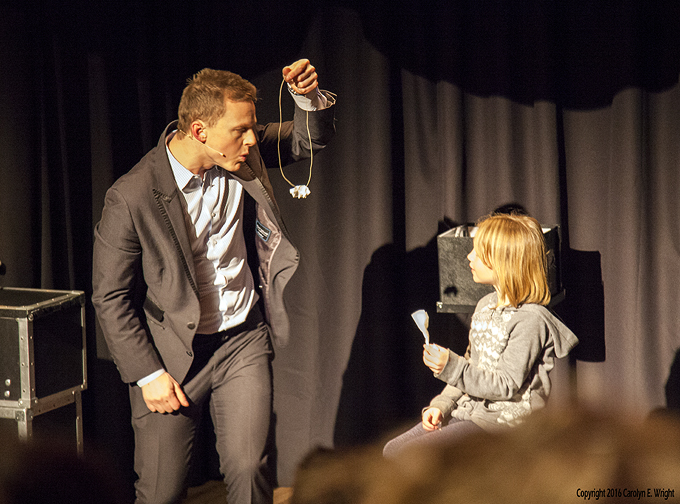 On this particular night Joel Ward kept stunning the full house with trick after trick.

As a shy kid growing up in San Diego, magic was a way to interact with people. He kept practicing to the point it became a way to make a living.

To keep things fresh he is always trying new things so the material never gets stale. He admitted one of the bigger challenges to performing at Lake Tahoe is getting winded easily because of the elevation. 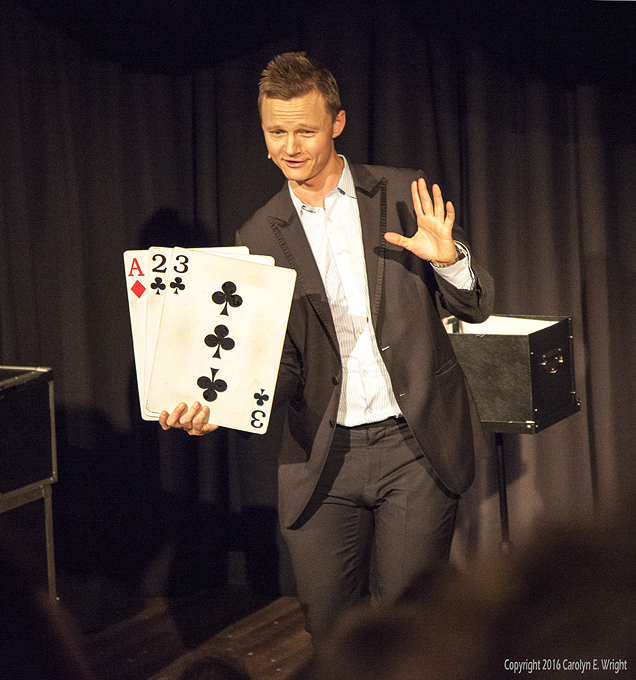 The show is thrilling for all ages.

Audience participation is huge for Ward. He brings down a slew of volunteers to the stage; all who return to their seats bewildered and perplexed by what just happened.

Ward starts by doing some old school magic with birds and ropes.

Then he does unfamiliar tricks, ones that are more complex, that seem to defy logic. One hundred dollar bills seemed to go up in smoke and then reappear; a paper heart became a pendant on a necklace.

Liz from Indian Lake, N.Y., cut a New York Times article at a spot of her choice. She was told to memorize the last word. A prediction by Ward had already been sealed in a container that was hovering above the walkway. But when the paper was pulled it wasn’t Liz’s word. Ward then unbuttoned his shirt to show WRONG written across his chest. That was Liz’s word. 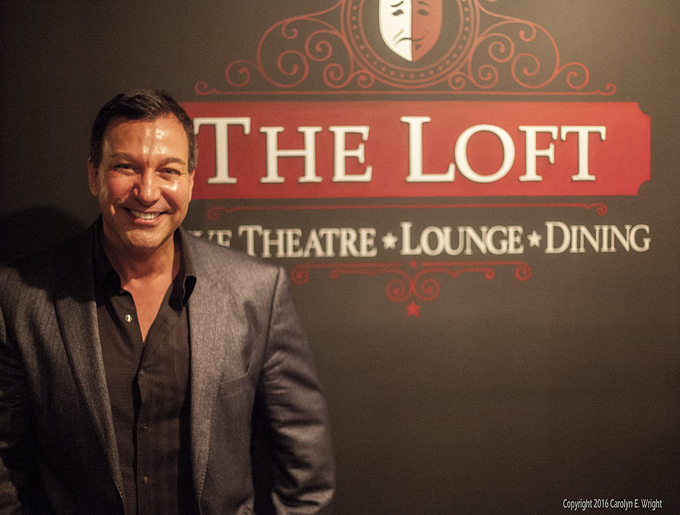 Paul Reder is the brains and inspiration behind The Loft. Photo Copyright 2016 Carolyn E. Wright

Carolyn from Zephyr Cove willingly gave her diamond-sapphire wedding ring to Ward. She signed a tennis ball like Ward asked her to do. To her it looked like any of the other balls she regularly plays with. It wasn’t long before the ring and ball went “missing”. Then Ward presented the signed ball to Carolyn to inspect. With a knife he slit it open and the ring was inside.

At one point Ward donned an astronaut suit – including helmet. He was doing card tricks. Somehow the card in question ended up inside the mask.

Heads shook. The audience was confused and amazed all at the same time. And it just kept going on all night. Ward left the patrons wondering what they just saw.

For those who don’t go see the Magic Fusion show, other magicians like Bobby Hall wander the restaurant and bar area performing card and coin tricks. 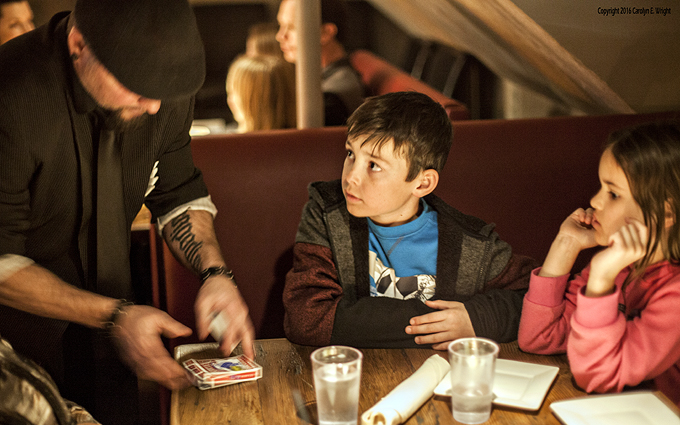 ·      Half price tickets are available to the Magic Fusion show for Lake Tahoe News readers. Details are online.

·      The Loft is located above the movie theater at Heavenly Village. It may be accessed from the third floor of the parking garage or on street level between the garage and movie theater.