South Lake Tahoe was supposed to have a designated city hall that would be in the middle of town, not one shared with aeronautical services.

Politics is the easiest answer for why it didn’t happen. Plenty of finger pointing has gone on in the last 40 years to prove that no one person is at fault for the building never coming to fruition. But there is still a family who will forever be wronged. They gave the land for a city hall and instead cops and criminals occupy it.

The city is not letting the past stop it from moving forward. There are plans afoot to turn the lobby of Lake Tahoe Airport into a welcome center. This is where the bulk of the city’s business is conducted. In the last couple years a “city hall” sign was erected. 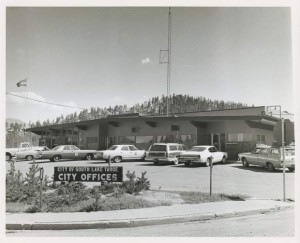 As far as city officials – elected and staff – are concerned, the airport is city hall. With the city deciding commercial air service is not viable nor will it be pursued, the FAA is fine with South Lake Tahoe using the structure as a city hall and not an airport terminal.

Could there ever be something more? Possibly.

“If we were to ever have a city hall in this community, I think what might provide a good return on the investment for the community is a civic center, not just a ‘city’ hall. A building where Tahoe Regional Planning Agency, city, Tahoe Transportation District, and El Dorado Count would all have staff in the same building, primarily for permitting and licensing, the most common government requests,” City Manager Nancy Kerry told Lake Tahoe News. “For the community members, to be able to go into one building, one location and have joint meetings, get all the information in one visit, greater coordination of information, permit processing and conducting government business would be a huge benefit and good return on the investment.”

Something like that, though, would cost millions of dollars. And to be determined is if taxpayers would want it even if the money were available.

Incorporation was the focus when the city started, not where business would be conducted.

“That subject simply didn’t rise to the level of importance to make it on someone’s agenda,” Laurel Ames said of a city hall. Ames was one of the leaders in getting South Lake Tahoe incorporated in November 1965. “The one big idea that emerged in the first years after incorporation was the need for a convention center. The idea was from John Williams, the first city manager. That history is short. It was proposed for the county campground and I think there was a bond issue, then the people voted it down.”

Del Laine, who served on the council from 1976-80 and 1984-88, remembers a time when the electeds met in what are now the county offices in the government complex where the sheriff’s and public health offices are. The council seats were at the same level as the public – unlike today. It was the 1970s, when the Tahoe Regional Planning Agency was just getting off the ground, and a man leapt across the table in anger.

Today, there is always a police officer – often the chief – at each council meeting.

“When the first five (Brad Murphy, Gerald Martin, Eugene Marshall, Norman Woods and Don Clarke) met, it was over dinner and anyone could attend. They would discuss council business over dinner before the formal meeting,” Laine told Lake Tahoe News.

City archives are incomplete when it comes to listing all the places the council met as well as where city employees worked. 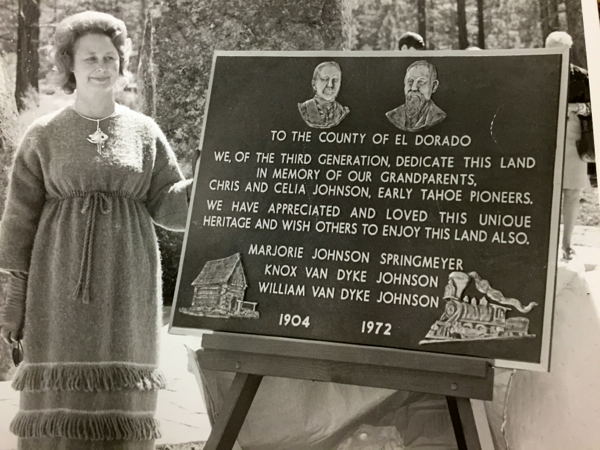 Marjorie Springmeyer at the dedication of her family’s land that was to become a city hall. Photo/South Lake Tahoe

Marjorie Springmeyer and her brothers, Bill and Knox Johnson, wanted to honor their parents, who were early pioneers in the area. They owned large swaths of land; with the three still having title to hundreds of acres. They decided to give South Lake Tahoe land on Johnson Boulevard (named after their family) for a city hall.

The deed signed June 25, 1967, states, “On or before June 30, 1972, Grantee will construct or will cause to be constructed on the herein-above described real property, one or more office buildings which shall contain office space for the use and occupancy of various basic municipal government departments, services and offices, including by way of example and without limitation, grantee’s building, Planning, and Recreation Departments and City Manager ….”

Instead, a courthouse, police station and sheriff’s office were built on that land.

It didn’t matter that the agreement said if the city failed to comply with the deal, that the title would revert back to the Johnson siblings or their heirs.

“I’ll never get over that deal … how they screwed up our land with the courthouse,” Springmeyer told this reporter years ago.

The courthouse got built because of a 1972 agreement between South Lake Tahoe and El Dorado County in which the two entities agreed to build city and county offices on the Johnson land. The county gave the city $1 for the rights to the land.

Springmeyer filed a lawsuit to prevent El Dorado County from taking over what had been her family’s land. She lost the initial lawsuit as well as the appeal. The judge ruled the administrative uses on the land were consistent with the wording of the agreement.

It didn’t matter that Bill Johnson was on the Board of Supervisors from 1969-80.

The county agreed to “convey to city an easement for the construction by the City of public offices (sic) building ….” In a preceding paragraph the buildings to be located on the acreage included “County offices, County courts, City Council chambers, City offices, County Sheriff’s facilities, City Police facilities and other County and City facilities …”

On March 21, 1983, Knox Johnson wrote a letter to the Board of Supervisors saying “there has been perjury committed in the courts” and his family “made a civic contribution”. The letter went on to say,  “If it’s only worth $1, then I should have it.”

No one has ever been able say why exactly a city hall never got built. Today there is no space at the government center to do so.

Through the years other locations considered for a city hall include Bijou Community Park and the 56 acres where Campground by the Lake sits. 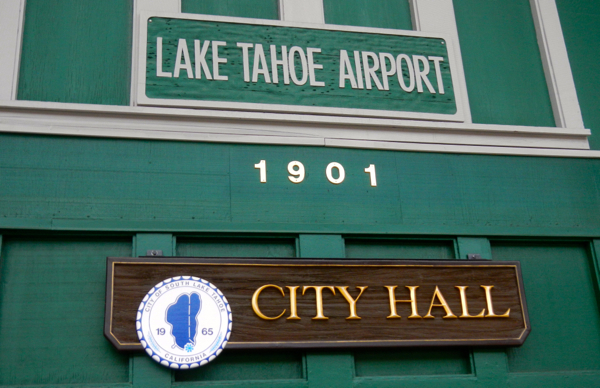 In March, when the council was devising goals for the next 18 months, overhauling the airport lobby to turn it into a showcase of sorts was discussed. Right now it’s hard to know one is walking into a city building. There was also talk of expanding the area to include a welcome center for visitors because coming in on Highway 50 from the west is the main route tourists reach South Lake Tahoe.

The engineering staff is working on a conceptual design and associated costs. Details will come back to the council later this year or early 2016, with the goal of starting the remodel in summer 2016.

The logic to staying at the airport is that the city owns the building. Plus, for 50 years it has survived without a building with the sole purpose of being a city hall so building one now doesn’t seem economically logical or feasible.

Not all cities have a distinct, ornate building along the lines of San Francisco’s city hall.

“A city hall can’t just be a pretty building; it must provide meaningful return on investment to the community. It should improve how the local government functions, provide new, improved and enhanced services and be a building that encourages civic engagement, promotes community pride of town ownership, provides opportunity for civic, community and cultural events – both art and culture – and opportunities for strengthening partnerships between government and the public,” Kerry said.

She is more concerned with providing quality services than the building from which those services are provided.

Even so, the city is on a quest to improve the infrastructure is has and not start from scratch. This means money will be spent at the airport to make sure it functions efficiently for the indefinite future.

“The building is our current city hall and will remain an important asset to the community for many years as so noted in the Airport Master Plan. The airport serves not only air travelers, but also serves community members conducting business with the city,” Kerry said.