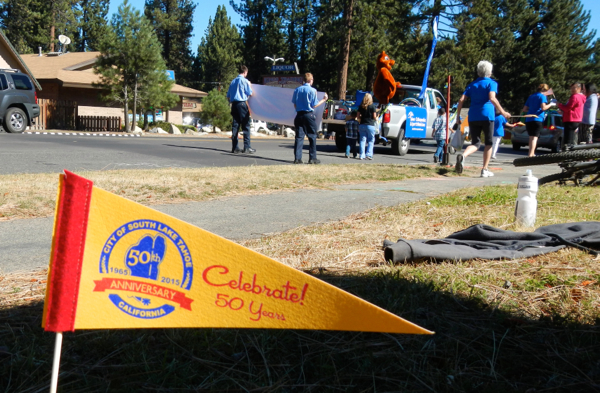 South Lake Tahoe celebrates its 50 years with a parade on Sept. 19. Photo/Kathryn Reed

Tears of joy and sentiment. Cheers of happiness and celebration.

In a burst of community pride, hundreds of people gathered Saturday on Highway 50 and Al Tahoe Boulevard leading into Bijou Community Park to mark a picture-perfect day for a parade and party to honor South Lake Tahoe’s 50th anniversary.

For most longtime residents and even some newbies, it was one of the city’s finest hours, or two, to witness 67 parade entries of floats, walkers, classic cars, fire trucks and appropriately a snowplow make its way through town that morning. Although the official 50th birthday falls in November, the city and its citizenry took full advantage of clear blue skies and warm temperatures to honor the past, present and future of this resilient mountain town nestled in the Sierra Nevada Mountain Range. 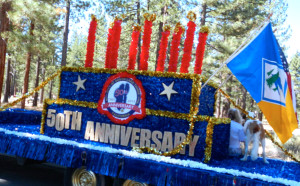 South Lake Tahoe is celebrating the past and future. Photo/Kathryn Reed

“I’ve waited 26 years for this. What a good day to celebrate and see a little bit of history. Look there’s Old Smokey, putting out our fires,” said Kimberly Jamison, who runs the Mailbag at Highway 50 and Tahoe Keys Boulevard.

Jamison has lived on the South Shore for a quarter century and believes the most memorable times are the ones in which the residents celebrate what they share – community spirit.

She was joined on the corner in front of the shopping center where her business is located by a brand-new resident. The group enjoyed the old cars honoring the classes as far back as 1965, the city’s inaugural year. 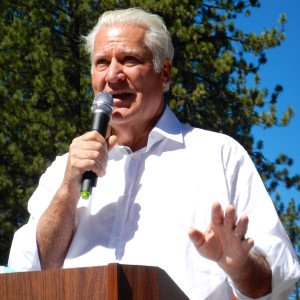 Mayor Hal Cole spoke of how the city is on a path to making positive improvements. Photo/Kathryn Reed

“We’ve moved a lot, and we’ve never moved anywhere where it’s been so welcoming,” said Jessica Branson. She brought her three children Jonah, 10, Trevor, 7, and Nolan, 6, to the parade route to witness the spectacle. “We love it here.”

Up the highway, Kevin and Sheri Livingston came from Gardnerville and staged themselves near Al Tahoe Boulevard to cheer on their son Daniel. The 14-year-old boy marched in the Civil Air Patrol, a task his parents said he had looked forward to for quite a while.

“He wanted to be involved in a community project,” his father said.

Children who were spectators seemed just as engaged during the parade.

In a demonstration of community pride among three generations, grandma Sandy Jones joined her daughter Samantha Jones with her daughter Kiki, 6 – who attends Sierra House Elementary School, to watch the city throw its street party.

Sandy has lived with her daughter here for 30 years and wasn’t going to miss it. The two huddled together, identifying participants as they went by. One of them yelled happy birthday to Samantha. 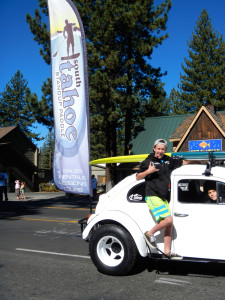 Dance instructor Marcia Sarosik knows so many people, she fell behind her float and group who shimmied to “Dancing in the Streets.” She ran down the street with a mock Olympic torch. Sarosik ran a leg of it in 2002 when the torch graced the town on its way to Salt Lake City.

The elder Jones reflected back on the past, recalling small, homespun parades in the late 1980s at Tahoe Valley. The youngest said she liked the present day, filled with ribbons and balloons. Kiki waited patiently for her cousin Emerson Hawkins, 9, to walk with the Lake Tahoe Vikings Pop Warner contingent.

The camaraderie in the community was unmatched.

“I like that everybody comes together here. We’ve gone through a lot in South Lake Tahoe,” said Julie Incopero, a resident of 40 years who sat in a beach chair with her sheltie dog, Buddy. Incopero listed the Angora Fire of 2007 that ripped through 254 homes and the abduction of Jaycee Lee Dugard as a child as examples of a community in catharsis. She also mentioned appreciating how the community supported her when her daughter McKenzie got a blood cancer and needed help.

Some things you don’t forget.

As the parade resulting from the hard work of former Councilwoman Brooke Laine emptied out into the city’s Bijou Community Park, dignitaries and bike advocates took the opportunity to dedicate its new bike park to a man who was undaunted in his pursuit to pass on the two-wheeling legacy – Tom Wendell. 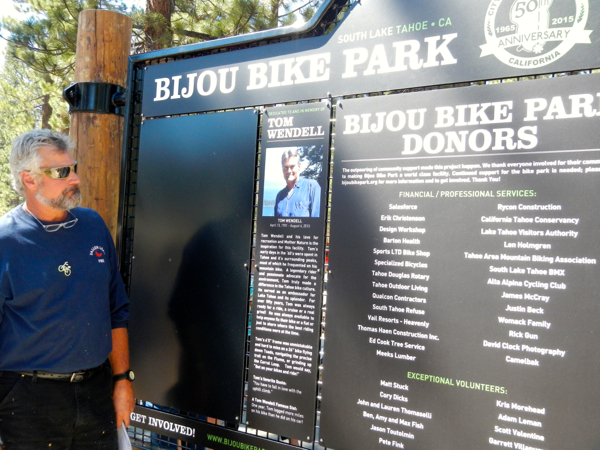 Ted Wendell brought many people to tears with his tribute to his brother, Tom, for whom the Bijou Bike Park was dedicated. Photo/Kathryn Reed

Wendell died a few years ago, but now his legacy lives on in the center of town in the shadow of the pine trees he rode through along with other destinations and journeys that exemplified his coveted life in South Lake Tahoe.

“Welcome to our new bike park,” City Manager Nancy Kerry said to hundreds of people gathered for the formal unveiling. The park represents a maze of gnarly jumps, banks and turns that mark a turning point in public-private partnerships for the city embracing its recreation-oriented heritage and future.

“This is the most significant recreation opportunity we’ve had in years,” Mayor Hal Cole told the attentive crowd of several hundred people. “This city is on a mission to make this town first class in recreation.”

Cole labeled the park a “perfect place to put his name” when speaking of Wendell.

The mayor was followed by the ever-so humble Assistant Public Works Director Jim Marino, who couldn’t seem to accept his award and instead dedicated his honorary plaque to his fellow city employees. He waxed poetic in speaking of the park, calling it a venue of “flow” that represents the “flow in life.”

The park was billed as a training place for athletes as well as an ideal hangout for youngsters wanting to master the art of two-wheeling like life-long BMX advocate and city Recreation Coordinator Lauren Thomaselli, who also received an award, and city Parks and Recreation Commissioner Peter Fink, who pedals the talk of cycling. (He and his wife, Karen, did an 8,000-mile cross-country trip years ago.) 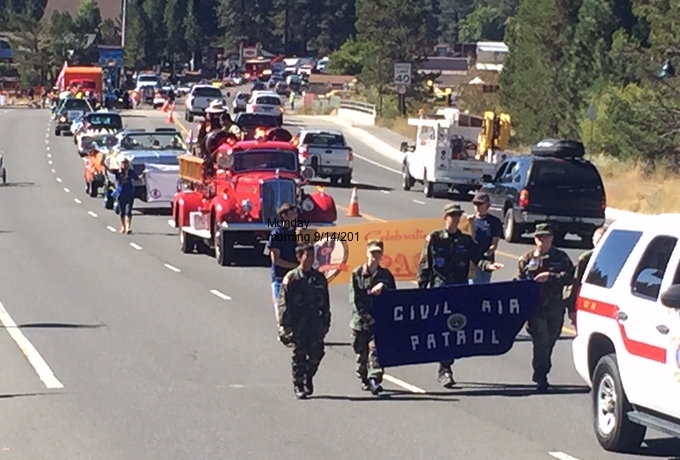 The parade was the length of four football fields. Photo/Susan Wood

“This is what a citizenship can do,” Pete Fink said, while looking out at the park.

Councilman Tom Davis, who has spent several years serving the city, called the project “your government at its finest.”

To those close to the subject, the bike park was long in coming – a project that prompted many to want to pick up and shovel to see it happen instead of sitting as a ream of paper on a shelf.

And no one knows that better than Ben Fish, who is president of both the Tahoe Area Mountain Biking Association and Bijou Bike Park Association. Fish held up a rough sketch he drew in 2011 to show what can happen when you take an idea and hand it over to a visionary like Kerry, an open-minded city council and building types like Marino. He received more than a plaque and bike socks for his efforts. His wife, Amy, wheeled out a new bike on behalf of TAMBA. She was in tears when she honored his dedication with the gift.

Just as attendees were on the edge of heart-tugging sentiment, Wendell’s brother, Ted, took the microphone and reduced many to tears in discussing his brother Tom’s tenacious efforts to “do the right thing” by his community and support all things and venues that were bike friendly. Wendell, who Cole describes as “a gentle giant,” showed up at countless meetings with a smile and charm.

“He never wavered from his convictions, whether they were popular or not,” Wendell said of his brother, Tom. “He was always trying to make things for the better.”

The brother listed things that Tom did to exemplify passion and pursuit of outdoor recreation – including his Zen-like time on his mono ski, surfing longboard and his bicycle billed as his most treasured possession.

“He was always in the present. He had that gift, and he shared it with everyone,” Wendell said.

Tom Wendell had an adventurous spirit that didn’t go unnoticed. And now it’s being passed on.

Ted Wendell told the crowd he came down to the bike park and ran into a young rider who called the course “so totally sic,” meaning awesome.

It was as though Tom was there between the trees as the city of South Lake Tahoe moves into another half century, cultivating recreation advocates of a new generation to take part.

Ted Wendell reminded everyone, “Tom would say: ‘Be the change you want to see.’”