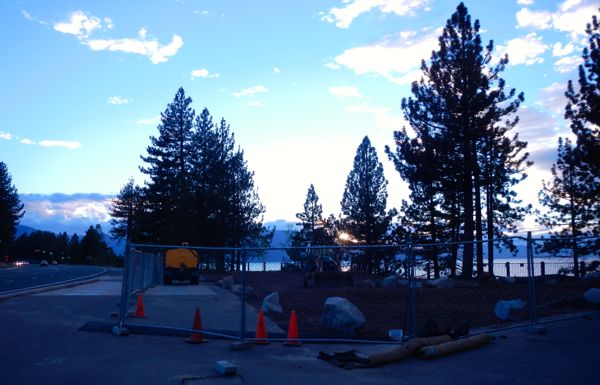 This area of South Lake Tahoe is slated to be a small gathering area without motorized access. Photo/Kathryn Reed

Lakeview Lookout – the working name of the other bookend of Lakeview Commons – is being designed to be a community gathering spot with a lake view, but on a much smaller scale.

The Alta Mira building came down in September 2014, opening up a view of the lake in South Lake Tahoe that hadn’t been seen in years.

The California Tahoe Conservancy, owner of the 0.55-acre site, is working on a plan to turn the parcel into something useable. To start with the state agency is removing the pavement and installing vehicle barriers to allow for better pedestrian and bicycle use.

Lakeview Lookout, like the Commons, is part of the greater 56-acre project. Beautification from this parcel to El Dorado Beach would complete the Lakeview Commons project. No money is in the bank for the Alta Mira site or the acreage going to the Commons, though plans have been drawn for both. (Lakeview Commons cost more than $6 million.) The remaining acreage in the bigger project is across the street and includes Campground by the Lake.

The Conservancy staff has solidified its plans based on public input and the creative forces at Design Workshop. The board will be briefed on the idea at the September board meeting, with the desire to see where members want to put this project on the priority list.

“Together with Lakeview Commons what excites us about this is that it really is a community space away from the tourist core,” Patrick Wright, CTC executive director, told Lake Tahoe News. “It is a place for primarily residents to have their space and enjoy the lake. For that reason it is likely to be a priority for us.”

There is only so much that could be done with the site because of how small it is and the fact it borders Highway 50.

Stephanie Grisby with Design Workshop told Lake Tahoe News, “We are trying to expand it out into the trees a little bit so it has a small cantilever. Because of the location right on the highway trying to get some sound mitigation is a key design goal. There will be a little bit of berming without blocking views of Lake Tahoe.”

The Conservancy is working on coming up with cash for the project that is estimated to cost more than $2 million, which includes going through the environmental process.

Soroptimist International of South Lake Tahoe and Tahoe Fund are two possible money sources. CTC staff will present the project to the service club today. Cathy DiCamillo, chair of the Soroptimist committee working with the Conservancy, did not return a phone call. The club has $250,000 to spend on a major project. A vote by the nonprofit is expected Aug. 12, however some in the club wonder how the capital improvement project has anything to do with Soroptimists’ mission of helping women and girls.

Amy Berry, who is executive director of the Tahoe Fund, is also a member of this Soroptimist group.

Wright said the remaining funds from Proposition 12 and other sources could help pay for the work. The state water bond, though, is not an option.

As for who would be responsible for the operation and maintenance of the site, Wright said it’s too soon to answer – instead he wants to develop the area first. However, he said it’s probable the CTC would engage South Lake Tahoe in a conversation about entering into a contract for the city to maintain the property like it does at Lakeview Commons.

Funding will dictate when anything of substance is done at this area.