Lake Tahoe Hard Rock’s pool has been losing 20,000 gallons a day for about a month, but it wasn’t until Thursday that hotel-casino authorities notified officials.

“They noticed an increase use in water in the pool in the last 30 days. They concluded it must be a leak,” JoAnn Kittrell with the Nevada Division of Environmental Protection told Lake Tahoe News.

Officials from her agency were at the property July 24 to begin an investigation that first started with mandating the pool be closed until the problem is resolved. Hotel guests are without a pool-spa for an indefinite period. Chaise lounges and cabanas, though, were still on the deck. 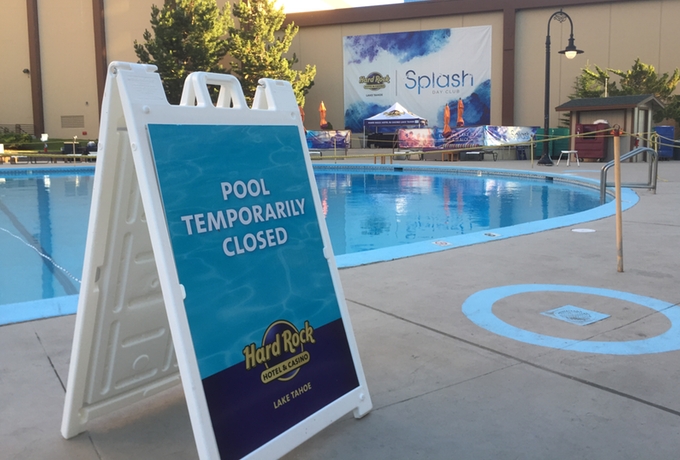 Lake Tahoe Hard Rock’s pool is closed until the source of the water is fixed. Photo/LTN

Kittrell said it is too soon to know if the ground water and soil have been contaminated with chlorinated water to the point that remediation needs to be done. Whether the owners face a fine will be determined down the road.

Edgewood Water Company supplies the water to Hard Rock. No one from there returned a call.

“They are going to dechlorinate and remove the water safely and legally,” Kittrell said of the next steps.

There was no evidence Friday night that this had begun. The pool was full as was the hot tub. Both have ropes around them and signs saying they are closed.

“They aren’t sure it is actually a leak, that is what they are investigating,” Jen Eastwood, spokeswoman for the Hard Rock, told Lake Tahoe News.

The front desk is telling callers there is a chemical imbalance in the pool.

“The pool itself is fine. They believe the issue is with the recycled pumping system – the plumbing that recycles the water that keeps it flowing,” Kittrell said. “They have sonar as a way to figure out where the leak is. They hope to do a minimal amount of excavation to reach it. The important thing is to stop any continued leaking into the soil there.”

When the Hard Rock opened in January summer pool parties were one of the things that were touted to set it apart from other Stateline casinos. The pool was installed when the hotel was first developed in the 1960s when it was known as Sahara Tahoe.