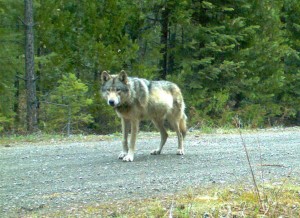 OR-7, which briefly called California home, is no longer a lone wolf. Photo/Oregon Department of Fish and Wildlife

GRANTS PASS, Ore. — Oregon’s famous wandering wolf, OR-7, is now officially the leader of his own pack.

State and federal wildlife agencies said Wednesday they have designated OR-7, his mate and their pups the Rogue Pack, for their location in the Rogue River drainage in the Cascades east of Medford.

It’s the first pack in western Oregon and the ninth in the state since wolves from Idaho started swimming the Snake River in the 1990s.

As a youngster, OR-7 left his pack in northeastern Oregon in September 2011 in search of a mate. He traveled thousands of miles across Oregon and back and forth into Northern California before finding a mate last winter in the southern Cascades on the Rogue River-Siskiyou National Forest.

The GPS collar that tracked his travels is still working, but biologists hope to replace it this spring.

Efforts to trap OR-7, his mate or one of the pups to put a tracking collar on them were not successful last fall, said U.S. Fish and Wildlife Service biologist John Stephenson. They hope to have better luck this May, when the pack dens up for more pups.

Even if the GPS tracking collar fails, a separate unit on the collar that emits a radio signal that can be tracked by a directional antenna should continue working, Stephenson said.

Oregon could consider lifting state Endangered Species Act protections for wolves this year if biologists confirm that four or more packs produced pups that survived through the end of the year. The earliest a proposal could go before the Oregon Fish and Wildlife Commission is April, said spokeswoman Michelle Dennehy. Delisting would not mean an end to protections for wolves, but would give ranchers more options for dealing with wolves that attack livestock.

OR-7 has continued to stay out of trouble as far as livestock are concerned.

Oregon’s management plan calls for protections to continue for the Rogue Pack until there are four packs in western Oregon producing pups for three years running. Federal Endangered Species Act protection also remains in force in western Oregon and California.