Firing of the cannons is a tradition at Fort Ross. Photos/Kathryn Reed

JENNER – More than two centuries later, one can still hear the Russian influence in the voices amid the grounds of Fort Ross State Historic Park.

Although lesser known in contrast to other California parks, this 3,386-acre park represents one of the oldest in the system. The Fort Ross Colony established it in 1812 through a cooperative company of U.S. and Russian settlers. With help from the Alaskan Alutiiq native Americans, the establishment 11 miles northwest of Jenner on Highway 1 became a large trading base for Russians seeking other venues to hunt fur-bearing marine mammals. They found them here on the wild Sonoma Coast.

The Russians and Americans worked together in building a colony with a stockade and homes for the settlers who tended a wheat farm and other crops. The cooperation lasted through the Gold Rush days until John Sutter bought the holdings in 1841. From there, Sutter sold to rancher George Call who exported apples, dairy products and wood supplies such as railroad ties. He, in turn, sold the property to the California Historical Landmarks Committee in 1903.

Coming out of the California State Park’s 100-year anniversary, one can still experience the spirit of that engrained cooperation today.

The park recently celebrated with its second Harvest Festival featuring a grand tasting of 11 local winemakers including the area’s own Fort Ross Vineyard and Tasting Room perched high up from the Sonoma Coast bluffs and featuring the oh-so temperamental Pinot Noir. There was also an artisan cheese maker from Freestone, along with tours and activities commemorating the park’s bountiful tradition.

The event can be a blast, literally.

“Fire in the hole,” many of the hundreds in attendance yelled, as park employees stuffed and lighted the cannon on the grounds of the stockade. The process appeared to take so long, one could almost imagine the enemy would have already climbed the stockade wall and attacked long before the cannon went off.

But today’s contemporary cannon blast is all in good fun. Attendees were instructed to cover their ears, along with dignitaries in attendance. Among them was Sergey Ivanovich Kislyak, who has served as Russia’s ambassador to the United States since 2008. 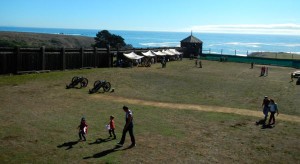 The acreage of the state park extends to the Pacific Ocean.

“It’s wonderful that a lot of Americans devote time to preserving Russian heritage and to try to pass that on from one generation to another,” Kislyak told Lake Tahoe News.

He then darted off to tour the grounds, complete with a general store, grain windmill and a residence built in 1836.

The ambassador was in Sonoma County for a conference on U.S.-Russia relations – diplomatic efforts intended to curb recent strained interactions around the world.

But Fort Ross represents a microcosm in relations of what could be in say a perfect world. At the festival, many Russian accents could be heard from visitors. This included one San Francisco couple who toured the site for the first time and declared their allegiance and support of preserving this heritage.