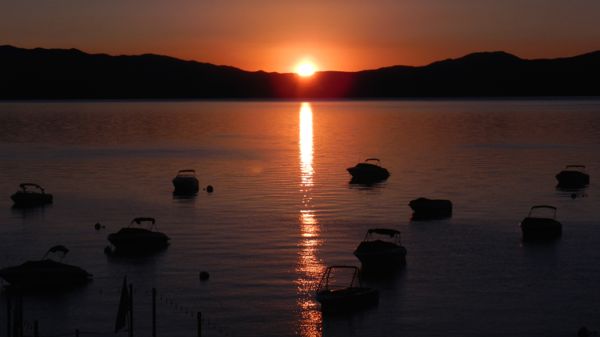 No need to get out of bed to see the sunrise from the West Shore Inn. Photos/Kathryn Reed

HOMEWOOD – As active as I am, I never dreamed I’d look so forward to waking up early on vacation. I also never thought I’d go to a hotel and have sitting be my favorite activity.

But a couple days at the West Shore Café and Inn isn’t just any experience – especially with a stay in the Marlette Peak suite.

This peak experience right on the lakefront starts with the sun rising. Views of Heavenly Mountain Resort runs remind us this waterfront experience is in our backyard. The many shades of pink and yellow of the shoreline seep through the morning clouds then changed in a matter of minutes, thus keeping me stationary for hours. Between the mesmerizing lapping of the waves only 20 feet out the window, a ski boat breaks the rhythm cutting across the shoreline with a water skier in tow. 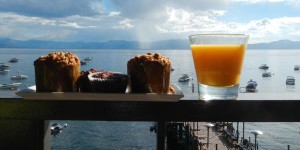 Breakfast with a view.

If one wants to move around, there are two balconies – one with two cushy chairs and an end table for morning coffee, another with a bench. The best seated-view, though, is smack dab in front of the floor-to-ceiling living room window.

A throw blanket is carefully placed on one of the chairs in case the temperature dips. When it got nippy, we turned on either the gas fireplace in the living room or bedroom. When the sun was beating it, we’d open the two balcony doors.

The first morning, I got up to take in the different views and to await a breakfast tray of assorted muffins and orange juice that would soon arrive at the door. Coffee is made in the living room/office area.

The rooms, which are inviting all day and night, are a tastefully decorated with an alpine feel, along with beautiful walnut wood furnishings and finishing accents. Even the nightstands in the bedroom look as though someone attached a tree-round steppingstone to legs. Elegant touches may have guests never wanting to leave. Tile floors and a full-size tub add to the relaxing experience. (Suggestions: Fix the shower so it drains properly, and so water is not being wasted, and provide consistent quality towels.) 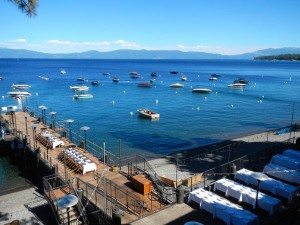 A view that never gets old.

Cushy robes let you lounge all day in comfort. The mini fridge filled with complimentary water and sodas is a nice touch, as was a tray of glasses for water, coffee and wine.

The wine glasses are Riedel, one of the finer things in life for wine enthusiasts. When Kae noticed what type of glass it was, she immediately took it off the balcony railing where she was snapping a photo.

Old black and white photos line the walls in the hallway outside the suite and continue to dot the walls inside. In the bathroom is one of Tahoe City, just five miles north on Highway 89 from the inn. The living room shows one of fishing on the East Shore.

Forget pulling the drapes, unless you totally want to sleep in or completely seclude yourself. For us, they were up and away the whole time. After all, the view is a huge reason to be here.

Even the large wedding on the deck below where the inn hosts dinner guests provided entertainment from one of our balconies that first evening. 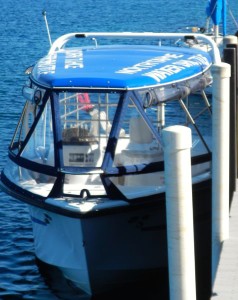 The West Shore Inn has the wedding thing down, hosting about 90 for the year. More than two-thirds of those are planned in the summer. Three fell on our recent fall weekend. (Note: Those who want access to the restaurant and quiet time at night may want to check this out ahead of time, as weddings can be quite festive into the wee hours.

Not having dinner there was no big deal on the first night. We simply added the North Lake Tahoe Express boat to our experience. In its third and final trial year, the shuttle runs from June 21 to Sept. 21 and can be used for pickups or drop-offs from five docks between Homewood and Carnelian Bay.

Through a recommendation of the West Shore Inn’s concierge Bill Gaines, we opted for the five-minute walk south on Highway 89 to Obexer’s marina to take it to Tahoe City for $10 a person, where Moe’s barbecue awaited. It’s fun and exciting to be on a motorboat on the lake. What’s nice about the shuttle is the plastic lining the bow to shield the wind — considering J.T., the skipper, cranks up the motor to travel 24 mph on the 25-minute excursion.

With his own personal experience to draw from, J.T. endorses the experience for those who simply don’t want to drive or may partake in too many cocktails. As one of the original drivers since its inception, J.T. has also done his civic duty on the water, having to rescue a stranded boater at Dollar Point. 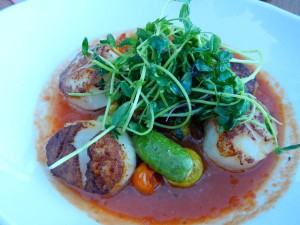 Scallops at the West Shore Cafe.

Bikes are allowed on the boat, which can accommodate a dozen people. Crewmembers J.T. and Matt are pleasant, professional and admit they like their jobs being out on the water. This is even with a slight slowdown after Labor Day weekend and with the drought’s impact of a low water level making docking a little bit more challenging. The shuttle service funded through Placer County’s transient occupancy tax was forced to remove Captain John’s as a drop off and pickup point.

If the boat shuttle doesn’t work out for the return from Tahoe City to Homewood, there are a handful of various vehicle taxi services. After dinner, we hopped into a North Shore Checkered Taxi cab where our local driver was courteous.

When asked about the upcoming big plans from the West Shore Inn’s owner JMA Ventures that is expected to change the face of Homewood, he said he liked the idea. In particular, the prospect of the West Shore’s first major development seemed appealing to him because it would be good “for the local economy.” He also backed the underground parking structure to deter the possible eyesore that goes with a major attraction as a large hotel planned at the base of Homewood Mountain Resort.

The development planned across the street from the West Shore Café and Inn may alter the identity of the small boutique hotel, but its place under the cloak of an upcoming 180-room hotel remains to be seen.

West Shore Inn General Manager Jessica Barton said it’s “tough to compete” with an upscale resort of that size, but it sounds like the West Shore Inn is holding its own in its own niche of weddings and group events. A few weeks ago, JMA – which has owned the 14-year-old inn for five years – bought two villas on the north side of the inn as additional lodging options. One is considered lakefront, the other serves up a mountain view.

“It’s important to get something more to accommodate large groups,” Barton told Lake Tahoe News of the popularity of retreat gatherings. 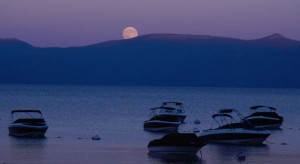 The inn is evolving. Barton said much of the focus in the West Shore’s experience is on amenities. Guests can now enjoy complimentary access to paddleboards and kayaks off their dock. The inn also partnered with a motorboat vendor that will offer charters with a 10 percent discount to guests. There’s a certain charm in being able to dock their boat or yours just steps from your room.

The second day of our stay, we hauled the 17-foot canoe down to the beach – with help Gaines had arranged as concierge extraordinaire. The paddling trip was both gorgeous and challenging, as our mid-morning jaunt to Sugar Pine Point was a little too late to avoid the headwind. Despite the workout, this activity is highly recommended.

Hugging the shoreline provides an interesting architectural tour, along with glimpses of residents’ ensembles of various water toys. One home had a slide that could be attached to a boat. A few boaters cruised by, but for the most part, the trip was peaceful and quiet. One woman sitting at the end of her pier was knitting and smiled as we paddled by. This was the universal sign for, ah yes, the good life.

Water at Sugar Pine Point looks like the Caribbean.

Three miles down from the inn, the water got a little rougher with more exposure to the wind, and the shoreline looked more rugged. I knew we were entering Sugar Pine Point State Park. And because I was told by an inn worker that an eagle bird’s nest is near the rock outcropping that we negotiated in the canoe, I found myself often looking overhead while trying to keep my eyes on where we were going.

We brought the canoe to the shore and walked down the beach to the large pier in front of a giant grassy area in front of the Hellman-Ehrman Mansion, a century-old-plus residence passed down from a San Francisco businessman. The California State Parks system, which bought it in 1965 from heirs, is maintained as a museum and an example of the opulence of yesteryear.

From shore-to-shore, Tahoe pioneering families have shown through chronicled history how life at the lake can be good and fulfilling. Before dinner, I glanced at the nightstand where the classic Tahoe novel “Lake of the Sky” by George Wharton sits alongside historian Mark McLaughlin’s popular “True Tales of Tahoe” series. I read all of Volume 1 while lounging at the end of the West Shore Inn pier, where a fire pit, stimulating conversation with other diners and a tray full of s’mores ingredients beckoned me on the second night of our stay.

Dinner at the West Shore Café is yet another example of the modern-day good life at Tahoe. The food is excellent, but the setting on the deck on the lakefront is untouchable. Add to that a full harvest moon and you get an experience as savory as my seared Maine scallops and Kae’s perfectly seasoned pasta.

An eclectic wine list offers varietals from Oregon to Italy and Australia to Hungary. We went with the Oveja Negra Sauvignon Blanc from Chile.

Before the delivery of our entrees, Kae joined many diners away from the table to take photos of the moon rising above the East Shore ridge. It was a picture-perfect night.

And the service was exemplary. Hoke, our waiter from Scottsdale who works in Tahoe for the summer season, was excellent, noticing every slight detail. He even fixed an uneven table, which most waiters in Tahoe would have ignored.

The West Shore Café offers two-for-one entrees in September, a nice gesture for the shoulder season. (However, I found the 20 percent mandatory gratuity a bit presumptuous, though I would have gladly given Hoke that and told him so.)

The lemon tart with wafer and strawberry sorbet and rhubarb is worth saving room for.

In the peak seasons, the West Shore Café is open for lunch and dinner, but is now open for dinners only through this month. In October, the inn is open without the restaurant. The first two weeks of November, JMA closes the whole operation for a major cleanup leading into the ski season.

• West Shore Café and Inn is located on Highway 89 across from Homewood Mountain Resort, five miles south of Tahoe City.