TAHOE CITY – You know it’s going to be a messy meal when there is a roll of paper towels on the table. And that’s a good thing at a barbecue joint.

Anyone who has been to the South knows what you get out West often isn’t authentic barbecue. It’s like it’s been California-ized. Not true of Moe’s Original Bar B Que in Tahoe City. 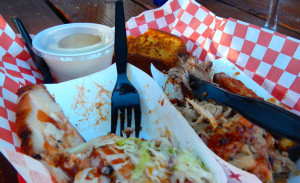 Moe’s in Tahoe City has food for barbecue die-hards and vegetarians. Photos/Kathryn Reed

This is one of 31 restaurants in the chain that was founded by three guys who met at the University of Alabama in Tuscaloosa. Mike Fernandez, Ben Gilbert and Jeff Kennedy are all from Alabama. (Two more restaurants are opening in October.)

This is the only Moe’s in Tahoe, but there is talk of opening a second one in the region. It opened this summer.

Cooks at each restaurant are encouraged to put their own spin on menu items.

“A lot of different things are done here. Instead of using bacon fat for collard greens, we use roasted tomato and garlic so it ends up as a full vegetarian product,” Eric Pilcher told Lake Tahoe News.

Pilcher, along with Josh Wallick and Luke Dannals own the Tahoe City franchise. Each day the meat is smoked fresh with fruitwood. If any of the pork, turkey or chicken is left, it might be turned into a gumbo or jambalaya. All of it is covered with two sauces. The sauce’s ingredients, well, Pilcher wouldn’t say. Extra sauce is on the table just in case. 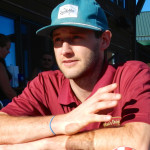 Owner Eric Pilcher said music will be a component of Moe’s as well as community involvement.

The sauce recipe is from Moses Day of Tuscaloosa, Ala. That’s who taught Fernandez how to fire roast meats. Day had no problem with the college boys using his recipe as long as they named their business after him. Which they did.

Sue said the pulled pork “is out of this world,” adding the sweet, smoky flavor was the best she has ever had. The white sauce on the smoked turkey seemed to be embedded into the meat, not just poured on top. She only put the ribs down long enough to get more paper towel.

While tofu is on the menu, the multitude of sides are more than enough to keep a vegetarian happy. Side dishes, which are not the same every day, and desserts are often family recipes from someone in the organization.

The fried green tomatoes were a highlight because they were breaded and cooked perfectly, plus the accompaniment of sweet red onions added to what can sometimes be a bland dish. Some of that barbecue sauce tasted really good on these tomatoes. 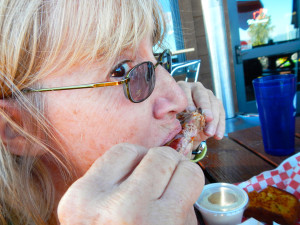 Sue enjoys one of the ribs.

The jalapeno corn bread could use a few more peppers (for that California influence), but otherwise it was tasty. It actually tasted like corn.

Most collard greens are too salty for my palate, but the vinegar in these helped balance the salt a bit.

I didn’t want to share the tomato-cucumber salad. Sue said it tasted like a garden. It wasn’t complex, seeming only to be seasoned with salt, pepper and vinegar. But it was a terrific blend that was crisp and refreshing.

Moe’s is definitely casual – which is perfect when you have sauce on your cheeks and need a second moist towelette that comes at the bottom of the plastic containers. And sitting outside with Lake Tahoe as the view, well, it’s hard to not want to stay and keep eating more.