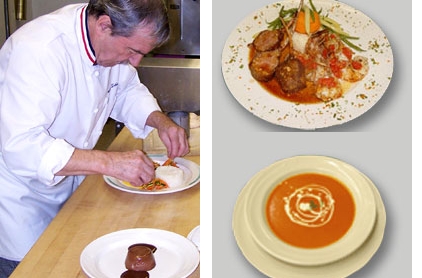 Chef Camille Schwartz will be closing Mirabelle in Stateline on Sept. 28. Photos/Provided

The South Shore is saying au revoir to its only French restaurant.

Mirabelle, which has been a tradition here for 14 years, is closing Sept. 28.

“I have been cooking for the last 60 years. It is time for me to stop before it gets too bad … before I use sugar for salt,” chef Camille Schwartz told Lake Tahoe News.

The owner-chef who has never lost his French accent is ready to do new things – including enjoying Tahoe. Working six days a week and maintaining a relationship with his wife who lives in Santa Barbara has been challenging. Now he wants to spend his days hiking and snowshoeing, and getting to Southern California more often. And he wants a dog – something he hasn’t had time for based on his hours.

One thing he is a bit apprehensive about is cooking at home. He never does it.

“I always eat at the restaurant. I don’t have food in the refrigerator,” Schwartz said.

Mirabelle has plenty of regulars who also may have to learn to do more home cooking. This is what some of them have to say about Mirabelle:

• Bob Keller of Zephyr Cove: “I have enjoyed chef Camille’s wonderful cooking almost since the day he opened; many times by myself; many times with just a few friends; and many times with a large number of guests, including for Carolyn’s and my wedding dinner. When out-of-town friends or family have visited, Mirabelle has been a must on our agenda. Chef often would come out of the kitchen to talk with us. Many of the servers have become close friends. It was like going home. Of course, it helped that the food was always fabulous.”

• Carolyn Wright of Zephyr Cove: “Bob took me to Mirabelle during my first Tahoe visit with him. It’s since been an important and weekly part of our relationship – a place where everyone knows our name. Chef’s food always has been delicious, from his pureed soup to after-dinner sorbet. Chef would make a fortune selling his incredible lemon and mint sorbets.”

• Kim Wyatt of Meyers: “It’s our regular date night spot. I love the onion tart, the mushroom tart, the pasta, the soufflé, the care with which the food is made, and the ambiance.”

Schwartz doesn’t have a favorite dish to eat or prepare. He said he likes to change things around, whether it’s making a bouillabaisse, soufflé, foie gras or escargot.

His interest in food started when he was a boy in France.

“I grew up on a small farm. I was always interested in the smells in the kitchen, what my mom was cooking,” the 75-year-old said.

At 14 he was an apprentice cook in another part of France. From there he joined the navy and was a cook for the French fleet. Then he spent six years as a chef on ocean liners. Schwartz was working for a hotel chain in the late 1960s that transferred him to different locations in Canada and the United States. It was in Chicago where he met his wife. She’s American, but speaks French.

For 20 years he had a restaurant in Santa Barbara called Mimosas. He sold in 2005 because it was getting to be too difficult operating it and Mirabelle.

With the number of hours he spends at the restaurant, Schwartz is pretty sure he won’t miss the work.

“I will miss the contact with staff who is family, and with customers who have become friends through the years,” Schwartz said.

He has between five and eight employees depending on the season.

Schwartz knows the finality of it will take some time to sink in.