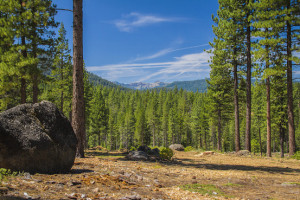 This vacant Martis Camp parcel was paid for in bitcoins. Photo/Martis Camp

The property is one of just a handful of residential real estate transactions in months that have used virtual currency—and potentially a record in terms of price. The price in bitcoins was 2,739.

The 1.4-acre acre home site has views of the Pacific Crest, a surrounding mountain range. It is located in Martis Camp.

Brian Hull, Martis Camp’s director of sales, said the buyer was a “Silicon Valley entrepreneur,” but declined to disclose his name. He said the buyer purchased the land through a trust, and plans to build a home on the site.

The idea to pay for the property with bitcoins came from the buyer, said Hull. “When we originally heard the idea of bitcoin, everybody had a little pause,” he said. “We weren’t educated at how the transaction would go.”