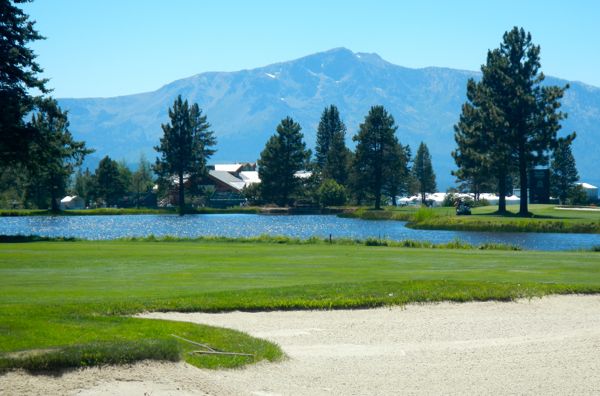 Edgewood Tahoe has been home to the ACC golf tournament all 25 years. Photos/LTN file

Combine a stunning setting with a mix of serious and comical golf played by athletes and stars who most people only dream of meeting, but suddenly are signing their program, and the result is the annual celebrity golf tournament at Lake Tahoe.

“The venue is a perfect storm in a positive way. You can’t ask for a nicer backdrop,” Gary Quinn, vice president of programming for NBC, told Lake Tahoe News. “You would be hard pressed to duplicate that setting anyplace else this time of year.”

A week from today a field of more than 80 celebrity golfers will tee off in the 25th annual American Century Championship golf tournament at Edgewood Tahoe in Stateline.

In this era of give me more, give me something bigger, better, new and different – making it to year 25 is an accomplishment. And everyone anticipates there being another 25 years.

Those who are intimately responsible for putting the event on attribute the success to the partnership of American Century (title sponsor since 1998), NBC, Harrah’s, Lake Tahoe Visitors Authority and Korbel. 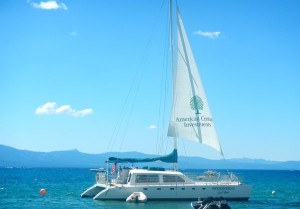 American Century Investments has been the title sponsor since 1998.

“I think it is partially the spirit of the destination and the people that has helped forge strong bonds and helps to support its long running success. It is the highlight of our summer, if not the entire year,” Carol Chaplin, LTVA executive director, told Lake Tahoe News.

The five entities work closely to keep the feel of the tournament the same without having it get stale and introducing new elements that don’t distract too much. That’s a careful balance.

Edgewood Tahoe is another key player. While the privately-owned golf course is embarking on developing a hotel on property, it means holes will be changed. They have been meeting with tournament officials about this for the last two years.

“They made contingencies so it won’t impact our event. We have been thankful to them for being overcommunicative and letting us know what is going on,” Quinn said. “We are excited about what it will become. It could be an added new component (to the tournament coverage) when it is done.”

Success has not come without challenges. There was the year a truck lost its brakes on Highway 50, came barreling onto the course and landed in a creek on the third or fourth hole. Fortunately, no one was hurt.

Lightning has struck once, which caused everyone to scramble. Now NBC has someone on site to monitor passing storms.

The Angora Fire in 2007 also threatened to disrupt the tournament because no one knew how long it would last or if people would be in the mood for that kind of entertainment.

Charles Barkley and others toured the burn area. He gave $100,000 to recovery efforts and took firefighters out to dinner.

Officials point to how the community has embraced the event. This is hardly just something tourists attend. 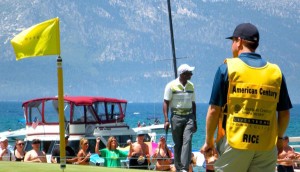 Jerry Rice often interacts with the gallery perched in the sand and on boats at Hole 17.

“What has changed in the last seven years, maybe eight, it that it just seems the event has clicked in the community,” Mike Milthorpe, tournament director for the past 23 years, told Lake Tahoe News. “People take vacation, there are more boats on 17. It’s now the event in the community.”

Still, it is a major moneymaker for the area.

“It has an annual economic impact estimated at $15 million [per year] and is consistent with our economic vitality focus area of capitalizing on outdoor recreation and lifestyle,” Lisa Granahan, Douglas County economic vitality manager, told Lake Tahoe News.

South Lake Tahoe City Manager Nancy Kerry said, “Equally as important are the lasting benefits from national television coverage promoting Lake Tahoe’s South Shore to the nation. Viewers watching the event on television may be inspired to visit Lake Tahoe. NBC does a good job weaving in local stories, stunning photographs of our unparalleled beauty promoting the importance of protecting our natural resource. The end result is an event that significantly supports the economy, promotes the natural environment, and even provides donations to local charities.”

According to the LTVA, the tournament since it started has:

The LTVA says there are 6.5 million TV viewers per year.

“In the summer it is a challenging time because on the weekends people are out and about,” NBC’s Quinn said of getting people in front of televisions. “The audience has been fairly consistent. This is an unheard of made-for-TV event.”

The Golf Channel re-airing the broadcast will double this year’s coverage to 18 hours.

Pairings on Friday are based in large part on what plays well to viewers and on-site spectators – like having hall of fame pitchers in a foursome, or all the NASCAR guys together.

“We try to keep balance between the fun side because that is why they tune into a celebrity event, but some of these guys are very good golfers,” Quinn said.

David Justice and most of the stars have no problems signing autographs and being included in selfies.

The same anchors are the ones who will be broadcasting the U.S. Senior Open this weekend for NBC.

Quinn also expects viewers will be interested in seeing Annika Sorenstam play with the guys. Sorenstam, who has a second home in Incline Village, is thought of as the best women’s golfer of all time. She retired in 2008 after having won 72 LPGA tournaments, including 10 majors and 18 other international tournaments.

It was Milthorpe’s idea to invite Sorenstam.

“I called Annika’s husband back in January. His initial response he said, ‘I don’t think she’ll play.’ Five minutes later he said she was in,” Milthorpe said.

Keeping the field balanced with known celebrities, longtime favorites and newbies is a challenge. Jack Wagoner, John Elway, Mike Eruzione and Jim McMahon have played every year. It’s easier to get athletes than Hollywood-type celebs because their schedules are more concrete. And some entertainment folks aren’t ready for their golf game to go prime time.

“If you are going to play in this event, you have to be comfortable playing in front of people. If you are not good, you have to have a sense of humor and laugh,” Milthorpe said.

• For more info about the tournament, go online.