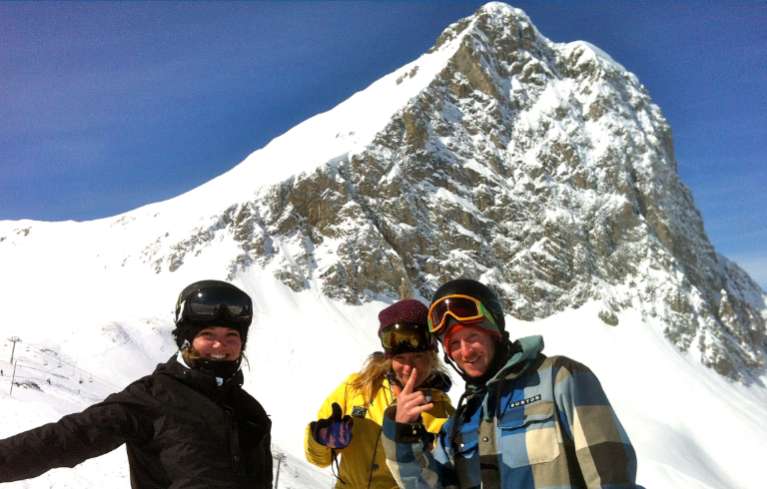 Elijah Teter, right, will be in Sochi for the Winter Olympics that start this week to coach Kaitlyn Farrington and Hannah Teter. Photo/Provided

The name Teter is synonymous with snowboarding. Though Elijah Teter’s name may not be on the competitors’ roster for the most recent halfpipe competition and you haven’t seen him stand on a podium lately, he is likely standing not too far away.

Teter, who used to live in Meyers, spent a decade as a pro snowboarder. After just missing a spot on the 2010 Olympic team, he turned his focus from competing to coaching. Now he is watching some of the athletes he trained take their skills to the Olympic playground in Sochi.

Kaitlyn Farrington and Hannah Teter, who have been under Elijah Teter’s instruction, will be representing Team USA in snowboard halfpipe. Ayumu Hirano, the 15-year-old Japanese phenom Teter has been working with since 2012, will be in Sochi riding for Japan.

It was after the 2010 Olympics in Vancouver that Teter began coaching fulltime. Even when he was riding professionally, he remembers always offering tips to other riders. He helped his sister train and coached a little during the summers. Teter said he enjoyed it, but never really considered it as a career option. Then in 2010, his sister Hannah, who had just won a silver medal in Vancouver and already had a gold from the 2006 Olympics, asked him to be her full-time coach. He accepted, and the transition from rider to coach was made. (Hannah Teter lives in Meyers and rides for Sierra-at-Tahoe.)

He now spends his winters in Colorado, and in addition to working with Hannah, is in his third season as a snowboard halfpipe coach with Ski & Snowboard Club Vail, a nonprofit focused on winter sports training. SSCV athletes come from all over the world and have graced many Olympic, X Games and World Cup podiums. (Much of the rest of the year Teter is in Grass Valley.)

Two years ago, when Teter was serving as a judge at the X Games, he was approached about coaching Japanese Olympic snowboarder Kazu Kokubo. Kokubo is possibly the most famous pro snowboarder Japan has seen, both because of his riding ability and his outspoken personality. Teter accepted the offer, and, along with SSCV, later picked up one of Kokubo’s teammates: Ayumu Hirano.

Hirano is being hailed as the one who could possibly dethrone Shaun White in the halfpipe and bring home Japan’s first medal in the event. At last year’s X Games, he brought home the silver, a close second to White. Though Japan will be sending its own coaches to Sochi with Hirano, Teter will surely be cheering him on.

Working as a coach and mentor to athletes at this level is no easy task, but having been in their shoes gives Teter a leg up.

“Coaching at the elite level is about a lot more than just teaching them tricks,” Ben Boyd, program director of SSCV, told Lake Tahoe News. “It’s about getting them in the right mindset.”

Boyd often coaches alongside Teter, and said this is something his fellow instructor is particularly good at. There is always a calmness about him, and he has a way of getting athletes to believe in themselves, said Boyd. Teter learned the importance of the mental aspects years ago as a pro rider. He says he spent time each day meditating and “centering” himself.

“When it comes down to it, we’ve all got good tricks, it’s who can land their run,” Teter told Lake Tahoe News.

These personal experiences as a rider make Teter’s influence as a coach invaluable. Boyd said he is one of the rare few who can break down the technicalities of a complicated halfpipe run and really understand what’s happening.

Teter still spends a lot of time on his board and has no reservations about his decision to get into coaching. “It’s nice to pursue something you’ve been pursuing for 20 years,” he said.

Teter may spend his days training athletes on how to do spins and grabs, flips and jumps, but in the end, he says the most important thing he can pass on is something he acquired a long time ago: a pure and simple love for snowboarding.