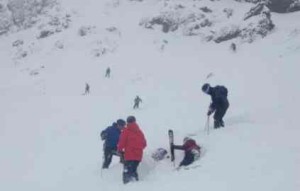 A person caught in an avalanche Feb. 27 at Kirkwood is freed from the snow. Photo/Corrina M. Strauss

No one was injured when an avalanche struck Kirkwood Mountain Resort on Thursday.

Resort officials said the avalanche was 50-yards-long and about as wide.

It happened in the Eagle Bowl area in the late morning Feb. 27. Four people were in the area, but no one was injured, according to the resort. But it wasn’t as mundane as the resort made it sound.

“Crazy day at Kirkwood! First lines in Eagle Bowl with about 150 others,” Corrina M. Strauss said. “White room, people yelling, ‘Wait! Wait!’ Then when the snow settles I came around a comer to see for the first time someone head deep in the snow with four others digging her out! About a half an hour later they closed Eagle Bowl again due to a major avalanche.”