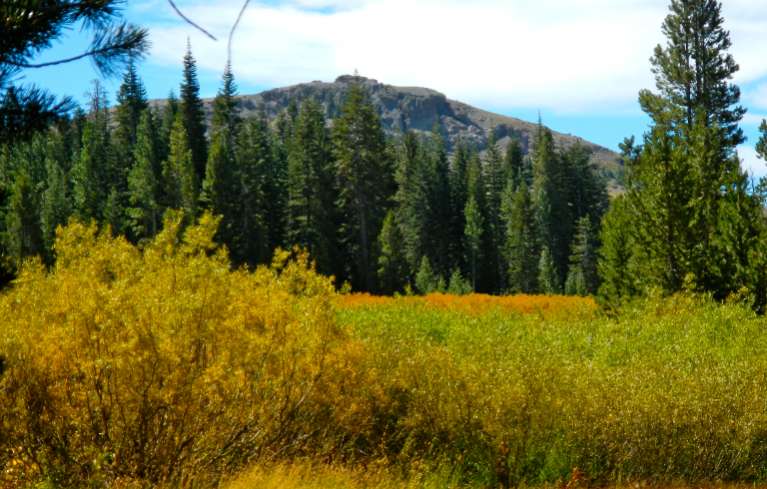 While the calendar says fall is still about a month away, the foliage throughout California is saying it’s on its way. Signs of autumn started appearing in earnest last week.

Trees in the Lake Tahoe Basin are starting to turn yellow, with the change even more prominent at higher elevations.

But it’s not just Tahoe – trees in San Francisco are turning, leaves on Napa grapevines are not all green and the corn husks in Lake County along Highway 20 have already dried out and turned golden.

Early September is the normal time to be seeing signs of fall color.

“Temperatures and lack of water play into it,” Michelle Breckner, senior climatologist with the Western Regional Climate Center in Reno, told Lake Tahoe News. “The quick burst of hot temperatures this year just dried everything out and it was drier this year.”

She said the ongoing drought in California and Nevada is making things drier each year.

“It is climate change and the Earth is hotter,” Breckner said. “The water is directed to other areas of the world.”

June and July were unusually warm in the Tahoe-Reno area, with August starting off cooler than normal.

“What you want for good fall color is warm daytime temperatures and chilly overnight,” explained Scott McGuire, meteorologist with the National Weather Service in Reno.

For the first half of August the daytime temps have been slightly below normal and the night temps just above normal. Still, the color is here.

“It seems like it’s been 15 years or so since we have had a cool August. August has generally been above average for the last decade and a half around Lake Tahoe. This one is starting out on the cool side,” Kelly Redmond, deputy director and regional climatologist with the Western Regional Climate Center in Reno, said.

It’s possible the colors may not be as vibrant as some years because of the lack of moisture. It’s been relatively dry since January.

“The best fall colors occur following a growing season with plenty of moisture or at least a good snowpack the previous spring and then a dry clear fall with cool nights but not freezing temperatures. Frost will cause the leaves to brown and drop quickly,” Blake Engelhardt, botanist with the Lake Tahoe Basin Management Unit, told Lake Tahoe News. “Local temperature and moisture characteristics as well as small genetic differences between individual (plants) will affect when and how the color change progresses. Even with the dry conditions, we could still see some really nice fall colors.”

This is how Engelhardt explained the leaf color transformation process: “During the summer growing season, the leaves are constantly producing chlorophyll which gives them their green color. In the fall, longer nights trigger the formation of the abscission layer. This is essentially a thickened layer of cells at the base of the leaf where it attaches to the stem that blocks the transport of water and sugar into the leaf. Thin deciduous leaves won’t survive the freezing temperatures of winter, so there’s no reason to keep feeding them. Once chlorophyll synthesis stops, the green quickly disappears and other more persistent pigments become visible yellows, reds, purples. If the growing season is particularly dry, the abscission layer can form sooner and the leaves may turn color earlier or drop before a very brilliant display.”

But just because the leaves are turning sooner does not mean winter will arrive sooner.

However, pay attention to what the squirrels do because their behavior can be an indicator of the winter ahead.

“We find if they drop a whole lot of pine cones, we will have a heavy winter,” Cheryl Millham, executive director of Lake Tahoe Wildlife Care, told Lake Tahoe News. Heavy winter means lots of snow or super cold.

Millham said she has started to notice some cones falling, but she isn’t ready to make any predictions just yet based on squirrel activity.