If the sportsbooks are right, there is going to be a repeat winner at this week’s American Century Championship golf tournament.

Dan Quinn, who has the won the tournament five times – including last year, is favored this year with the odds at 7:2. Seven-time winner Rick Rhoden is behind him with 4:1 odds. Three-time winner Billy Jo Tolliver has odds of 9:2 and two-time winner Jack Wagoner has 6:1 odds to win.

Sneaking in at fourth favored, though, is John Smoltz. He has yet to take home the trophy or $600,000 purse.

While there isn’t big action on the annual celebrity golf tournament, it can add another element of excitement to the event. 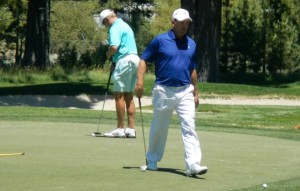 “A lot of celebrities will go in and bet,” John Packer, spokesman for Harveys-Harrah’s told Lake Tahoe News. And many are betting on themselves. Some joke about thinking the odds are not what they would have set for themselves.

“There are probably seven to 10 who could walk away with it any given year,” Packer said, which means special attention has to be paid to how the algorithms are used to configure the odds.

Those who follow the Lake Tahoe tournament that is now in its 24th year won’t be surprised to learn Charles Barkley is the least likely man to win. But at 500:1 odds, he is not alone. Trent Green, Jay Demarcus and Kevin Nealon have the same odds.

Packer says some people have joked that Barkley should be closer to 1 million to 1 odds to win.

But sometimes a rather long shot wins. Mario Lemieux was at 40:1 to win. He paid off big for some people in 1998 when he took home the title.

Phil Weidinger, who handles the public relations and a lot more for this tournament, put down $100 on Lemieux that year. He was watching from the pressroom as Lemieux was coming down the 18th green. That putt he sank put $4,000 in Weidinger’s pocket.

Weidinger isn’t revealing who he has money on this year.

Besides the straightforward bets, there is also one prop bet.

Quinn caddies for pro Ernie Els on occasion. While Quinn is in Tahoe, Els will be at the British Open. The odds they will both win July 21 are 85-1, while the odds that they will not are 1:105. The latter bet means for every $105 spent, the bettor could win $1.

Like all betting odds, the numbers are subject to change before play begins.

• NBC will televise the 54-hole tournament live July 19-21. The sportsbook at Harveys will be airing it on multiple televisions.

• Wednesday is a practice round.

• Thursday is a celeb-am tournament.

• Tournament tickets (Fri-Sun) are $25; the other days are $15. Discount tickets available at Raley’s.

• The tournament is played at Edgewood Tahoe in Stateline.