Living at higher elevations has health benefits and drawbacks.

Thin air means an increase in red blood cells, which is one reason athletes like to train at high altitudes. They tend to perform better when they return to sea level. But mountain sickness hits some who gain too much elevation or do so too fast. Then there is the issue with the inability to get enough oxygen.

David Young with Barton Cardiology spoke before a crowd of more than 80 people Wednesday night at Lake Tahoe Community College about issues of the heart when it comes to living at 6,200 feet and higher.

The South Lake Tahoe doctor said he started seeing signs of sleep apnea with many of his patients. But these weren’t overweight people who would be more prone to that condition. These were fit Tahoe-ites. 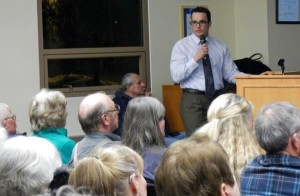 “Clearly there was something happening to their respiration at night,” Young said.

Signs of central sleep apnea include:

• Awakening with sensation of gasping-choking

Not getting adequate oxygen can affect people who have a heart condition. People with severe sleep apnea are nearly three times more likely to have hypertension, Young said.

Atrial fibrillation is the most common malfunction with the heart. Between 32 and 82 percent with it also have sleep apnea.

“There’s a high rate in particular with what we see in Lake Tahoe,” Young said. “If I don’t correct the apnea, there is an 82 percent likely recurrence of the atrial fibrillation.”

He went on to say, “Sleep apnea is present in 76 percent of the patients with heart failure.”

It used to be that overnight sleep studies were the only way to deal with sleep apnea. Now people can use at-home monitors that are strapped to a finger and include being hooked to oxygen.

Young said the sure-fire ways to stay healthy living at higher elevations are to not be overweight, don’t smoke because that puts even more stress on the lungs, stay hydrated, limit alcohol and caffeine intake, and get a CalStar membership just in case.

Note: Young will be repeating this lecture Feb. 13 at Sierra Nevada College in Incline from 6-7pm.