Plenty of people can talk a good game, but few actually are in the game. Terry Jones is a talker and a player.

As founder of Travelocity and chairman of Kayak.com, Jones knows what it takes to start a successful company from scratch and keep it viable. As someone who has been on the lecture circuit for the past 10 years, he knows how to inspire. 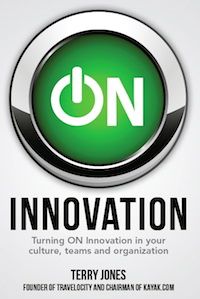 But the Incline Village resident also knew he was packing a whole lot of information into 60 minutes, where people might take away one or two ideas. That is what inspired him to turn his talks into a book. “ON Innovation: Turning On Innovation in your culture, teams and organization” was published in 2012.

It’s a fast read. Jones has designed it so it does not have to be read cover-to-cover. He also envisions it being a reference book.

The 194-page book ($15) has 72 ideas. Each chapter is a few pages. This is a book that is ideal for front line staff, CEOs and definitely middle managers.

His is more of a “how to” book. How to do things, how to look at your business in a new way, how to be strategic, how to listen — overall, how to innovate. The book delves into the need to experiment, take chances and lose the phrase “we’ve always done it that way”.

“You have to reinvent yourself all the time. I don’t think it has anything to do with Tahoe, it has to do with business in general,” Jones told Lake Tahoe News.

He said retail in particular has it hard because of all the competition online.

Jones knows he’ll be writing another book. The focus will be about building digital relationships.

He said it’s travel more any other industry that has been transformed by the Internet. This includes people using the Internet to search for places to stay, to rent skis and a place to eat at the end of the day.

Jones was the keynote speaker at last fall’s Nevada Governor’s Conference on Tourism.

He is on the board of the Lake Tahoe Shakespeare Festival – chairman the last three years and currently the secretary. Jones said when he first started working with the Incline group the bulk of the advertising was with local print publications even though 60 percent of the people at the summer event were tourists.

Now the festival has a strong Web presence.

Jones has had a place in Cave Rock for about 10 years. When he got divorced he wanted out of Texas and picked the Tahoe house. Through Match.com he met his current wife.

“She said if you want me, you get Incline too,” Jones said. They live together in Incline, though he is on the road about 150 days a year.

When he isn’t speaking, writing or doing work for one of the multiple boards he sits on, he can found enjoying Lake Tahoe. This season he returned to the slopes after having quit downhill skiing when he was 15 because he needed a spinal fusion. He finally got that fusion.

He skied earlier this month for the first time in 50 years.

“My wife was a competitive skier in college. I hope to get to the point where I can ski with her,” Jones said.

In the summer, look for him skimming across the water in his Wherry boat at Sand Harbor.