TWIN BRIDGES – Don’t ski? Don’t worry. Ski resorts have something even for guests who don’t want to strap a board or two to their feet.

They can provide a different way for you to slide or let you strap other devices on your feet that are less scary than skis or a snowboard.

“At Sierra we are so passionate about progression. We hope they go down the sledding hill and then want to ski,” resort spokesman Steven Hemphill told Lake Tahoe News. “We don’t look at it as just a tubing option. We look at it as getting them on the snow and then intrigued about sliding on skis or a snowboard.”

Plus, Sierra-at-Tahoe offers other activities that aren’t snow related – like the Cal band that is playing this weekend and various wine events throughout the season. 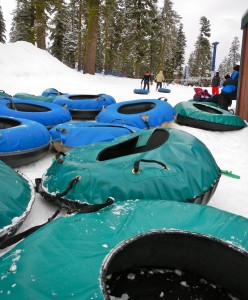 Tubing at Sierra is an option for those who don’t ski or want a break from schussing. Photos/Kathryn Reed

Most Tahoe area resorts have something other than skiing or snowboarding for their guests.

Chris Sathre, 46, of San Juan Capistrano brought his 4- and 6-year-old to Sierra’s tubing hill. It was hard to tell which of the three was having more fun. Sathre liked the hill because it’s safe and you “get a little speed.” While he skis, the tubing allows him to have fun with his kids.

Twelve-year-old Sonya Pinsky of Alameda gets a running start to fly down the tubing hill at Sierra-at-Tahoe. As she goes over the rollers she pulls up on the tube to get some air.

Scary? Not to her. Pinsky is all smiles talking about the fun at the resort’s Blizzard Mountain.

Two routes are available for tubers; both with curves where riders can go up embankments. When the worker spins the tuber there is no telling what direction one is going – except down. What might be around the corner or even when the next corner is can’t be ascertained unless the rider only received a normal push to get going.

For the more experienced tubers like Pinsky, it was all about running  about 15 feet from the start line, landing on her stomach on the tube and going fast.

“So many people may not have seen snow. It’s a great way to ease into it,” Hemphill said.

The tubing hill used to be on the Broadway run. Three years ago the resort created Blizzard Mountain near Lot E.

In addition to the tubing lanes, there is a bouncy house, snow fort and sledding.

It costs $25 to tube for two hours. The number of runs one can get in all depends on how many people are there – just like skiing. Food and beverages are sold at the bottom where the tickets are purchased. The sledding is at the top of the tubing hill.

The top of the tubing hill is also a turn-around point for snowshoers.

Jen Soto and her mom Patti Brecht, both of El Dorado Hills, have opted to snowshoe while others in their party are skiing. Soto is recovering from a back injury, so she wanted a less strenuous activity. This was her first time on snowshoes, second for mom.

They rented their equipment from the little telemark hut near the Grandview lift. All-day rentals are $25 – which includes access to the trails. For those with snowshoes, the three-mile roundtrip trek is free.

Starting off the signs clearly point where to go. Then markers lead us into the woods where it’s incredibly quiet and no longer do we realize we’re at a bustling ski resort on a Sunday.

But then the signs are gone and the packed snow goes in opposite directions. One route is over a creek with no clear indication there is any sort of bridge other than snow covering the water, while the other leads out of the woods to the trail that is wide as a road.

We choose the safer route. However, a resort official later said that the true route crosses the creek and goes to a lookout where Pyramid Peak looms tall in the distance.

An option for those who don’t want to be outdoors is to participate in the Wednesday wine tastings from 3-4pm in the Pub. El Dorado County’s Madrona Vineyards pours a variety of wines.

Besides the Cal band, various musical acts come to the resort at different times.

All of Sierra’s events are online.