Master plan to set a route for Lake Tahoe Airport

The South Lake Tahoe City Council on Tuesday made two decisions regarding operations at the Lake Tahoe Airport: the potential outsourcing of airport management and the selection of an outside consultant to prepare an airport master plan.

In October 2012, the city put out request for proposals asking for submissions from airport management companies to manage and operate the Lake Tahoe Airport, with the goals of maximizing the uses and users of the airport, and lowering the airport’s operating costs. The airport is currently managed by city staff consisting of Airport Director Sherry Miller and four airport maintenance technicians.

It operates at an approximate annual deficit of $325,000. The idea of outsourcing airport management was suggested by former City Manager Tony O’Rourke in March 2011 as part of the city’s five-year plan to reduce personnel costs. 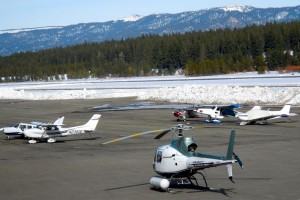 Lake Tahoe Airport’s future is tied to the next master plan. Photo/LTN

RFPs were received from two airport management companies, GCR Inc. from New Orleans and ABS Aviation headquartered in Atlanta. ABS manages operations at the Minden-Tahoe airport. The management fees in these proposals ranged from $300,000 to $500,000 annually.

These proposals were evaluated to see if they would create “a reduction in the negative cash flow.” In her staff report to the council, City Manager Nancy Kerry indicated that they would not and recommended the council reject both bids. The report noted, “The airport is managed well with a very minimal staff.”

Another reason for rejecting outsourcing of airport management at this time is that the city is about to undertake the preparation of a new airport master plan, a long-range planning document dealing with all aspects of airport operations, which Kerry indicated would be assessing a wide range of viable economic alternatives for managing the airport.

“The studies and analysis provided through the master planning process,” the staff report noted, “will provide guidance to conduct a more informed decision on this matter.”

Sherri Thompson, ABS Aviation COO, and airport manager at the Minden-Tahoe Airport noted that ABS wants to stay “engaged” in the process, is involved in the Tahoe community and wants to see the airport succeed. Michael Golden, owner of Mountain West Aviation, the airport’s fixed base operator, spoke, encouraging the council to increase utilization of the airport and set “tangible milestones for staff” such as ensuring that all hangars on the airport are leased out.

The council accepted the staff recommendation and rejected both bids for outsourcing airport management at this time. (Councilwoman Angela Swanson was not at the meeting.)

The council then considered the selection of an outside consultant to produce a new airport master plan. The last airport master plan was completed in 1992 as part of the Lake Tahoe Airport Master Plan Settlement Agreement. This agreement among the city, TRPA, California Attorney General’s Office and League to Save Lake Tahoe ended years of contentious disagreements and resultant lawsuits regarding appropriate noise restrictions, commercial flight levels and other operational issues at the airport. It put in place a complex set of requirements and restrictions regarding commercial service.

During the last 20 years, a cavalcade of commercial air carriers served the Lake Tahoe Airport under the terms of the settlement agreement, but none of them lasted. There has been no scheduled commercial service at the airport for more than a decade.

The city has continued to maintain the economic importance of the airport to the community, and has retained its FAA-issued Part 139 Air Operating Certificate, required of airports with scheduled commercial service.

There has been considerable discussion, with varying viewpoints, of what are the guidelines for commercial service now that the settlement agreement has expired. There are no simple answers. Some parts of the 1992 master plan and accompanying environmental impact report carry over. Which ones they are depends on who you ask. As City Manager Nancy Kerry noted at the council meeting, “We still operate under that umbrella,” but did not go into any specifics.

TRPA External Affairs Chief Julie Regan told Lake Tahoe News in June 2012 that, “If the current (master) plan expires before a new plan is in place, the status quo would continue, i.e., the city would continue to operate the airport as a general aviation facility until a new plan is developed and put in place.”

General aviation airports do not have scheduled commercial service.

Kerry indicated that an airport committee, comprised of herself, Miller and councilmembers Tom Davis and Swanson has been reviewing these issues over the last year, and determined that the city’s best course was to complete a new, comprehensive master plan now.

Under FAA guidelines, the city had to first put out a request for qualifications to be sure a qualified consultant was selected before any agreement regarding the costs of the master planning process could be entered into. An RFQ was put out by the city in August, and three responses were received: from Mead and Hunt Inc., C&S Companies and Vanir in Association with RBF Consulting. Staff recommended the city select Mead & Hunt, and enter into negotiations with them to prepare the airport master plan. This recommendation was based on the criteria that the firm had the necessary technical expertise, their staff had familiarity with this specific airport, local regulations and environmental issues, had experience preparing master plans at similar airports as well as past success in actively engaging local communities in the master planning process.

Once the consultant is selected, then the city, the consultant and the FAA enter into negotiations. The FAA will pay 90 percent of the costs, up to $318,000. The city must pay the remaining 10 percent. The city has already allocated its share in the 2012-13 budget. These amounts do not include preparation of the environmental documentation, which is estimated to be about $250,000. The city will conduct a cost benefit analysis to determine whether it is best to hire a consultant for this phase or hire one or two short-term in-house environmental planners.

The council accepted the staff recommendation and directed that the city enter into negotiations with Mead & Hunt. A formal agreement will come back to the council for approval at a later date.

Master plans historically can take up to two years to complete. Kerry noted that the city is hoping in this case to have an “expedited” master planning process.

The city has been actively seeking proposals from regional air carriers flying new generation, quieter aircraft to begin serving the Lake Tahoe Airport. Mayor Tom Davis added, “We might have an airline interested within a year or year and a half.”

If the new master plan were not completed at that point, then the city and Tahoe Regional Planning Agency officials would have to sit down and decide on what noise, flight levels and other requirements had to be satisfied in order for the city to get a TRPA permit. Kerry said the city would need to complete environmental documentation if they changed the “current use” of the airport by adding scheduled commercial service. She added that she believes TRPA would respond positively to a proposal from an airline with three to five flights a day using quieter aircraft that met the decibel levels established under the 1992 Settlement Agreement.