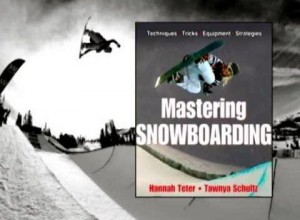 Olympic gold medalist Hannah Teter, who snowboards for Sierra-at-Tahoe and hails half the time from the South Shore, has written a book about her sport.

The “how to” book called “Mastering Snowboarding” reveals its “seven truths” as told by one of the best. Teter has won many awards, including five medals in the Winter X Games in 2003, 2004, 2005, 2009 and 2010. Most notably, she won gold for the United States in 2006 at the Winter Olympics in Torino, Italy – for which she was tapped as the U.S. Olympic Committee’s Sportswoman of the Year.

Now – at a the mere age of 26 as of Jan. 27, she has elected to share the secrets of her craft with beginners and moderates as well as advanced riders.

Everyone has to start somewhere. For Teter, it was the back yard of her parents’ home hitting a jump her brother had built.

“I think I got a little banged up, but I had the bug from (then on) and never looked back,” Teter told Lake Tahoe News.

When asked why she is giving away her secrets in such a competitive sport, Teter added: “I wanted this book to be something that any rider from the first-day beginner to the up-and-coming pro could pick up some tips from, (ones) that I wish I had been presented with when I was coming up.”

This isn’t the first time Teter has given back. She is an active philanthropist – especially when it comes to the world’s poor. She started Hannah’s Gold in 2008, named after her family’s maple syrup that comes from her hometown of Belmont, Vt. The charity donates profits from the foundation to the village of Kirindon, Kenya, where the money goes to securing clean drinking water, schools and farming projects. Her efforts got the attention of Ben and Jerry’s Ice Cream of Vermont, which labeled a flavor after her – “Hannah Teter’s Maple Blondie.” (Note: This reporter from Vermont tried it a few years ago on a visit to the company’s Waterbury factory and highly recommends it to all sweet tooths.)

This time, Teter gives back by warning snowboarders in her seven truths, that yes, “Everyone fails.” It’s all a part of the risk one takes to advance in any humbling sport.

“It’s easy to get down on yourself when you first start snowboarding,” the book says on how to “stay positive” in the “What to expect” chapter highlighting the seven truths. “Practice makes perfect.”

The other six truths sound simple and include:

• You are going to feel uncoordinated.

• You may love or hate snowboarding right away.

• If you are optimistic and focus on having fun, you will enjoy the ride.

• You are going to be sore at the end of the day.

The “Getting the most out of your ride” chapter may reduce the soreness of workouts. Techniques involving crunches, dumbbells, medicine balls and stretches are featured.

The book, which is co-written with Tahoe Snowboard magazine founder and editor Tawnya Schultz, highlights a little of the snowboarder’s own language. For example, the “ollie” means to use the momentum of your body on a jump.

There’s also a host of rail tricks with cute names such as the tail and nose taps along with the wall ride. The tricks chapter represents the most compelling tips Teter said she wants readers to take away from the book.

“Some fun tricks in there aren’t super fun to learn,” she said of the challenge.

Once again, most things worthwhile in life don’t come easy.

“There are many tricks to be learned, and they are well diagrammed,” randyw22 posted on Amazon.com, one place where the book can be purchased for $15.17 in softback as a coffee table book and $11.99 on Kindle.

It appears Teter is challenging herself yet again for the upcoming Winter Games in Russia in 2014, telling Lake Tahoe News she’s working on a few new tricks.

“I’m hoping to have (them) dialed in before the end of the season,” she said.

What’s the biggest obstacle to honing the craft?

“(It’s) always mental. Once you release that self-doubt (that) is the biggest obstacle to success … the sky is the limit,” Teter said.

Teter knows all about a limitless sky.

She came across the opportunity to write the book through her management. The publishers, Human Kinetics, have come out with a slew of recreation-oriented how-to books on a range of topics – from social dancing and high-scoring baseball to senior fitness and the triathlon anatomy. The Illinois-based company has released seven “mastering” books in the series, which also highlights mountain biking and judo. Beyond Amazon, Teter’s is available through Barnes & Noble and Books a Million.

“We obviously picked her because she’s well known in the sport. It’s great we got someone of her caliber,” the Illinois-based company’s Publicity Manager Alexis Koontz told Lake Tahoe News.

Koontz announced Teter’s book a month ago, and it has received rave reviews. One came from the head coach of the U.S. Snowboarding and Freeskiing Association.

“Hannah has not only won Olympic gold and silver medals, but she has also lifted women’s snowboarding to the next level during her 10-year pro career. ‘Mastering Snowboarding’ lays out a clear path so you too can reach your potential, feel great and have fun,” Mike Jankowski said in a statement.

Of course, a girl has to have some fun, and that’s something Teter has come to embrace when she’s not working.

The pro snowboarder, who has perfected the skills of flying through the air above the manicured, hard-packed superpipes, enjoyed the oh-so different experience of carving Tahoe’s recent holiday powder at Sierra-at-Tahoe before hitting the road.

“I had the time of my life. Sierra-at-Tahoe is family to me. It is the most fun mountain to shred in all of Tahoe,” she said.

The ski resort west of Meyers rewards the pro with her own “walk-of-fame-style” preferred parking spot marked by a star just next to the slopes.

When she visited, she dropped off a copy of the book to Sierra General Manager John Rice, whom she mentions in the book’s acknowledgements alongside marketing manager Mindi Befu.

“Hannah has become a true champion in many aspects of life, as a competitive snowboarder and as a philanthropist. Her passion for the sport and for life are what set her apart from other successful athletes. We wish her all the success in the world with her latest project as an author,” Rice summarized.

After a quick read, Rice said he found the book to be “a very complete guide to snowboarding” – from the tricks and gear to health and safety.

In particular, the Sierra chief also liked the way she covered all aspects of the sport, including its origin. “The History of Snowboarding” in Chapter 1 notes “snurfing” in the 1970s from an East Coast surfer sliding on lunch trays strapped to his feet. Snowboarding gurus Jake Burton Carpenter and Tom Sims took notice, and the sport’s popularity took off in the 1980s. In the decade’s second year, the first National Snowsurfing Championships were staged at Suicide Six ski area in Woodstock, Vt. – this reporter’s hometown. The first ski area in the United States was launched within a mile from Suicide Six – Mt. Tom.