Horizon hotel-casino in Stateline is struggling to keep its door open and find people to rent one of the 539 rooms.

Tahoe Horizon LLC, a subsidiary of Columbia Sussex Corp., runs the South Shore business. Horizon employees were laid off before the December holidays. This is usually one of the busiest times of the year for lodging properties at Lake Tahoe as well as for casinos.

While General Manager Corinna Osborne did not return Lake Tahoe News’ phone calls, one of the fired employees who spoke off the record, said about a dozen workers were let go. Valet, bellmen and restaurant workers are out of work. One of the employees had been with the property for more than 30 years. 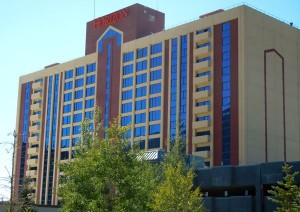 Horizon hotel-casino operators have just more than 16 months on their lease. Photo/LTN file

Tahoe Horizon’s contract to operate the hotel-casino expires March 31, 2014. The next day Edgewood Companies takes control of the building. Edgewood has owned the land for more than 50 years.

While Edgewood is aware of the recent layoffs, officials said the hotel-casino operator is not contractually required to report those dealings to them as the landlord.

“We don’t have any indication they won’t stay open,” Patrick Rhamey, vice president of real estate for Edgewood, told Lake Tahoe News. The company is not making contingency plans if the Horizon wants to close before the contract expires.

Rhamey would not say what the Horizon may become after Edgewood takes over. However, the property will stay open over the long haul.

With gaming licenses difficult to get in Nevada, it’s probable a portion of the 30,000-square-foot casino floor will forever have some form of gambling.

Rhamey said the company is discussing what the property will become, but said nothing has been decided.

The company’s website says, “Edgewood Companies has been conducting research and analysis to evaluate potential reuse or redevelopment options for the Horizon site. Options ranging from the preservation of the status quo to a complete scrape and redevelopment are under consideration. The full redevelopment of the site may include a destination resort with a recreation and entertainment focus. Amenities could include a live entertainment venue, a recreation hub to serve as a gateway to Tahoe’s great outdoors, a casino, and an indoor spa and fitness facilities with complimentary retail and restaurants. A redevelopment would include significant water quality improvements to improve clarity in Lake Tahoe.”

While the future of the Horizon is up in the air, Edgewood Companies is going forward with plans to develop Edgewood Lodge on the nearby Edgewood Tahoe Golf Course. A business plan is being created which will include who is going to build the facility as well as operate it.

Site work and the pier will be done this summer, with actual ground breaking of the lodge likely occurring in 2014.