While Thursday night concerts have been a success at Lakeview Commons based on attendance, the complaints about it being something less than a family event dominated a portion of the afternoon session of Tuesday’s South Lake Tahoe City Council meeting.

Mayor Claire Fortier said the number and types of calls she has received has her constituents saying families don’t want to go back to the concerts.

Her colleague said it’s not quite that bad based on his experience of being at all but one show. 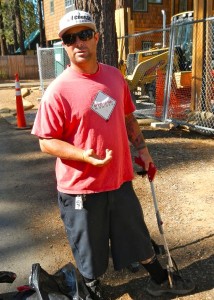 Rob Giustina of OnCourse Events talks about all the trash people leave in the neighborhoods by Lakeview Commons. Photo/Kathryn Reed

“I’m concerned it could go that way real easy if we don’t take proactive action now,” Councilman Tom Davis said in terms of the free event turning away families.

Police Chief Brian Uhler responded by saying, “We will have a heavy presence at Lakeview.”

He said people smoking marijuana would be cited and that officers also have the authority to cite anyone who throws a cigarette butt on the ground.

Pot and tobacco smoke are the predominant complaints, along with the literally thousands of cigarette butts that are picked up each week by volunteers. (Having a card for medicinal marijuana will not stop cops from telling someone to take it elsewhere.)

The council at its Aug. 21 meeting is expected to entertain an ordinance that would ban smoking of all kinds at city parks – which would include Lakeview Commons.

“There shouldn’t be any smoking at all, whether it’s cigarettes or marijuana. We need an ordinance to cover that,” Davis said.

The other thing the city needs to do is bring its special use permit and park rules into compliance. Permits can be granted for alcohol, but park rules say no alcohol ever.

Right now OnCourse Events, the promoter of Live at Lakeview, has a beer garden. (Wednesday paddleboard does as well, as do the Derby Dames at Bijou Community Park. Even the city has operated a beer booth at Bijou Bash.)

In September, the council will also be looking at refining what it wants from concessionaires in the future, what is allowed and not allowed. The businesses operating at Lakeview Commons and Regan Beach are only there for this season.

Standup Paddle, which operates the boathouse at Lakeview, is being taken to court by Beachcomber Lake Tahoe, a private resort on Lakeview Avenue. The dispute is over the paddleboard’s tent on El Dorado Beach blocking the view of Beachcomber guests.

City Manager Nancy Kerry told Lake Tahoe News the city is not named in the complaint and that staff is trying to facilitate a resolution. If that doesn’t happen, Beachcomber could be asking a judge on Friday to tell Standup Paddle to move its tent.

When the city first awarded the contract to the South Tahoe company to operate the boathouse it was not envisioned the beach would become an extension of the building for doing business. But there is nothing in Standup Paddle’s contract preventing it from using all of El Dorado Beach.

And not part of OnCourse’s contract is cleanup. Still, owners Rob and CarolAnne Giustina along with an employee and any volunteers who show up each Monday between 8-10am fill multiple large trash bags. (Meet at the fire pit to help each Monday.)

“We do the beach, but the heavy focus is the neighborhood,” Leslie Schultz with OnCourse told Lake Tahoe News.

Crews go down about three blocks on Lakeview Avenue and to Tallac Avenue along Harrison Avenue.

The reason to do this on Monday instead of Friday is so anything left from the weekend gets picked up, too.

The city takes care of the cleanup in the street level area of Lakeview Commons.

Rob Giustina’s thinking is the neighborhood is already impacted by the music; it shouldn’t be troubled by the litter left behind.

But what shocked the Giustinas and Schultz as they picked up trash this week was the abundance of cigarette butts and people leaving empty bottles on the side of the road. They also can’t believe people are bringing their dogs to such a crowded event – and to a location that doesn’t allow canines.

Giustina said they put up 12 signs saying no alcohol, no smoking, no dogs. The response by many was – no compliance. Plus, multiple announcements are made about the smoking – whether it’s tobacco or weed – that it impacts the enjoyment of others.

Giustina is a firm believer this is “everybody’s park” and wants to make sure everybody is comfortable coming to his free Thursday concerts that will go on through Sept. 6 from 4-8:30pm.

Previous post : Former member appointed to LTUSD board of education Next_post : What would you think of the Tahoe area hosting the Summer Olympics?