INCLINE VILLAGE — What do you get when you mix a sandbox, 3D imaging and a Wii Kinect? A cutting-edge exhibit designed to teach kids, and adults, about hydrology and topography.

The Augmented Reality Sandbox uses 3D technology to teach kids of all ages about science, and in this case, the movement of water as the landscape changes that will be part of the exhibits at the Thomas J. Long Foundation Environmental Research Center in Incline Village. The sandbox will be added to the center by next summer, but a prototype is likely to be on site during the Children’s Environmental Science Day on Aug. 11. 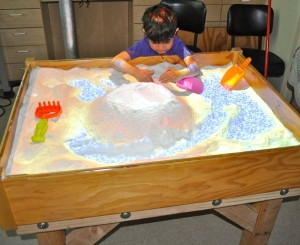 A sandbox of information for children to play in on Aug. 11 in Incline Village. Photo/TERC

Imagine that you build mountains and rivers in a sandbox with a Wii Kinect mounted above the box projecting topographic features onto the sand in real time. You dig a large lake in the box, and the computer puts an image of a lake in the sand. And, when you’ve built mountains, meadows and streams, you can make it rain (virtually, of course) and see how water flows.

Playing in the sand will never look the same again.

The sandbox is one of several projects that the Tahoe Environmental Research Center is developing to add to its education component – an app is in the works, as well as several other exhibits using augmented reality technologies.

Augmented reality is a live view of a physical, real-world environment (such as an image viewed through a cell phone or other device) that is augmented by audio, video, graphics or GPS data.

“It’s exciting that Tahoe is one of the places that will get these exhibits right off the bat,” Heather Segale, TERC education and outreach director, told Lake Tahoe News.

The app, which uses a location-based augmented reality, uses GPS coordinates to display points on interest based on the user’s location. Sitting in Segale’s office on the campus of Sierra Nevada College, she demonstrated a prototype of the app using her phone. She pointed the phone at the lake (through a wall for this demo) and the app located Lake Tahoe, based on GPS coordinates, and then offered points of interest from environmental improvement projects around the lake to the Tahoe City Marina to earthquake faults to local beaches. TERC envisions a component that could be used by visitors, or for learning about wetlands and topography, to sailors being able to access weather conditions on different parts of the lake. TERC is still working on a way for the app to designate elevation differences.

TERC also is looking to incorporate what it calls tabletop prototypes into the Incline Village center. The tabletop prototypes are activity-based exhibits in areas from the movement of water to stewardship of fresh water lakes like Lake Tahoe and ecology, among others.

The projects are being funded through a National Science Foundation grant and is a joint venture with the Lawrence Hall of Science for the tabletop exhibits and the U.C. Davis KeckCAVES for the 3D visualizations. When complete, the technologies also will be made available to other education centers.

Children are invited to spend the day with scientists, and see the Augmented Reality Sandbox up close, on Aug. 11 from 1 to 4pm learning about the ecology, function, restoration and preservation of Lake Tahoe. And, free ice cream will be provided from 2 to 4pm.

The 13th annual Children’s Environmental Science Day is a free event sponsored by TERC with more than 40 interactive science activities for children ages 6 and older. The day will include interactive science demonstrations by UC Davis scientists, local agency and nonprofit organization staff, and AmeriCorps members. Hands-on activities are designed for the whole family.

The Thomas J. Long Foundation Education Center is a resource for children and anyone interested in learning more about Lake Tahoe.

The center features three unique stations offering different perspectives on the lake. The first is the Virtual Research Vessel with a two-thirds model of the research vessel John LeConte, which features some of the research tools including a Secchi disc, a net used to collect Zooplankton and a Van Dorn sampler used to captured water from 1,600 feet.

The second station is a Virtual Laboratory with informative videos and beakers with Mysis shrimp, an invasive species, Zooplankton and other experiments.

The 3-D Visualization Lab, the third station, offers three 3-D movies including the Global Earthquake View, “Lake Tahoe in Depth,” which lets viewers dive under the surface of Lake Tahoe to see fault lines, the footprint of glaciers and underwater landslides, and the newest film, “Mapping Change,” on the changing face of our forests.