Ambleside beckons the tourist who likes to play outdoors

AMBLESIDE, England – Billed as one of the most beautiful places on the planet, England’s largest national park may be vast and full of superlatives – but it also holds the distinction as having a small-town spirit. The region of northwest England is welcoming, friendly and oh, so comfortable.

This is the place to feel at home – especially if you hail from another lake with stunning scenery and you grow up in the rolling, emerald hills of New England.

From the minute a visitor steps off the train at the Windermere station and boards a bus for a 10-minute ride to Ambleside, it’s difficult to not be taken in by views that take your breath away. The scenery is filled with grazing sheep and cows, lush landscapes dotted with rocks dating back 500 million years, as well as England’s largest, deepest lakes as serene as a plate-glass window. 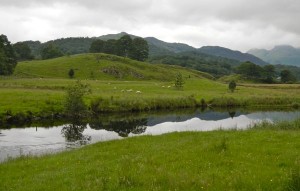 Ambleside, England, is the perfect place to travel for people who like the outdoors. Photos/Kathryn Reed

Arriving in the small, quaint village of Ambleside is like entering another world – with its notable stonewalls, cobblestone streets, tiny abodes and gorgeous flora that includes vivid purple foxgloves standing 6-feet high.

London has William Shakespeare. Bath relishes its past with Jane Austen. But this fantasyland of sorts has gained a worldwide reputation as being the home of Beatrix Potter, who wrote a series of children’s books based on the lovable “Peter Rabbit.” Potter’s legendary rabbit, which turned 110 years old last month, makes up the vacation plans of thousands of Japanese parents who have religiously taken their children through the book series as they grow up. One may tour her nearby home.

Ambleside serves as the inspiration to artists, creative types and adventurers for hundreds of years. Poet William Wordsworth and C.S. Lewis, professor and author of the “Chronicles of Narnia” known to escape in its sheer beauty and embrace its atmosphere.

The small town is appropriately named. Many visitors can be found holding walking sticks, carrying packs and wearing hiking boots – ambling along.

Before going out to explore, it’s highly recommended that visitors park their hiking boots in the front-entry of the Haven Cottage. There’s a reason it won the AA B&B Friendliest Landlady of the Year in 2011. With rooms averaging about 85 pounds a night, the bed and breakfast owned by Tim Hall and Lindsey Kinley is homey. They take hospitality to a level beyond the highest peaks found in the Lake District.

“People come from all over. It was like the (United Nations) around here (recently),” Hall said, noting his guests from the United States, Belgium and Germany. One Scottish woman has returned to the Haven Cottage 30 times. The place “stays busy every weekend throughout the year,” Hall added. The Lake District has come to be known as a four-season destination, but it’s summer that keeps the place hopping.

The B&B has much character in its exquisite décor, which is complemented by Hall’s insatiable humor. He bravely hung a sign at the entrance reading: “Hot beer, lousy food, bad service – welcome.”

In fact, visitors may want to stay just to hear Hall spin a yarn, tell a joke or serve up a puzzle for each guest before they devour the inn’s famously delicious breakfasts. (Note: If the intoxicating smell of his own vegetarian sausage recipe and roasted tomatoes grown locally isn’t enough to fill the senses, wait until the fresh baked bread comes out of the oven.) In the evening, a nightcap of liqueur or wine on the sofa in the living room is the perfect activity to cap off the day.

Ambleside sits on the northernmost corner of Windermere Lake in the Lake District.

Windermere Lake Cruises, which can be accessed out of Ambleside or Bowness to the south, runs a variety of cruises across England’s largest lake, which spans 10 miles and goes to a depth of 219 feet.

The boat cruise company uses old steamers, with one – the 122-year-old Tern — carrying the Olympic torch into the Bowness harbor in June amid a regatta of boats alongside and thousands of cheering spectators awaiting its anticipated arrival into port.

“Ten thousand people were gathered at Bowness,” said Windermere Lake Cruises staffer Jacqui O’Connor, who was on board at the time.

She was still smiling widely as she recalled the experience aboard the Tern’s sister boat, a 75-year-old triple-decker steamer called the Teal. It takes out hundreds of visitors on its sunset jazz cruise in the summer. The enchanting two-hour cruise is one sure way to slow down life for the evening. Jazz from a local band and a full, tasty buffet complement the backdrop of amazing views. The scenery, especially as the sun dips into the horizon, is nothing short of spectacular. White swans float along the shoreline. Sprawling estates that look like mini castles poke out of the waterfront forest lining the lake. Vast green meadows dominate the hillsides behind the forest.

Those green hills also provide an excellent scenic route pedaling south to Coniston Lake — touted by Bing.com as one of the 10 most beautiful lakes in the world. It is one of 80 lakes in the Lake District in the Cumbria region. An 1859 steam yacht also takes visitors across its northern section. At half the length of Windermere, the lake also holds speedboat records.

The destination is definitely worth the trip via bike. (BikeTrek in Ambleside has hybrids for rent and suggestions for where to ride.)

The roads from Ambleside to Coniston are filled with offshoot paths where the national government trust has secured arrangements with local farmers to allow visitors to walk and cycle through the ranchland with its captivating green meadows, colorful flowers, clear streams and pretty mountains in the background. (Just remember to close the gates when passing through.) The single- or double-track paths are fun and sometimes challenging without ever feeling like too much for novice technical mountain bikers.

The round-trip ride, which provides a few elevation gains that are not for the faint of heart, takes about three hours to complete. But afterward, one of England’s famous ales may await a hardy rider in Ambleside without guilt. (Note: Ambleside Tavern or Royal Oak Pub – especially the latter if a Wimbledon tennis match is on — are worth visiting.)