MEYERS – Meyers is an ideally situated spacious and walkable mountain community that values sustainability, health, wellness, and the natural environment. Uniquely concentrated with year-round outdoor sport and recreational opportunities, the Meyers mountain culture is the hallmark of our thriving local-based economy, boasting a diverse commercial and retail environment, welcoming visitors and providing residents with an extraordinary place to live, work, and play.

That is the recently adopted vision statement for Meyers. Those words lay the framework for this South Shore hamlet as it goes about putting itself on the map in a more definitive manner. 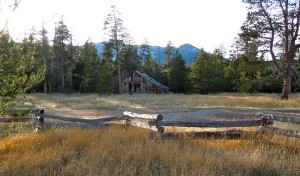 California State Parks may need to do an Historic Structure Report on the Celio barn in Washoe Meadows State Park. Photo/LTN file

Gone is the Meyers Roundtable; with Wednesday night being the last meeting. In its place will be the Meyers Advisory Council. The first meeting will be Aug. 15 at 6pm at Lake Valley firehouse on Highway 89. At that meeting the council will be appointed and work officially begins on developing the Meyers area plan. That will be an official document that will ultimately need approval by the Tahoe Regional Planning Agency.

Part of that plan will include Washoe Meadows State Park and Lake Valley Recreation Area. The latter is better known as the home of Lake Tahoe Golf Course.

“We want to help the community be a recreation hub. Our park is right in the middle of this recreation hub,” Steve Musillami, chief of the State Parks Planning Division, told the more than 30 people at the July 25 meeting.

Most of Wednesday’s meeting was about the future of the state park and golf course.

While a lawsuit regarding the reclassification of the land and CEQA irregularities is still tied up in the legal process, the State Parks people carried on as though that did not matter. When asked about it, they said they were not at liberty to talk about it.

In January, the California State Park and Recreation commissioners upheld their earlier decision to swap land between the adjoining park and recreation area in order to allow for the golf course to remain 18 holes after the Upper Truckee River is restored.

Musillami spoke about how 100 percent of the golf course is now in a stream environmental zone, that 6,200 linear feet of the course are along the river and 850 would be when reconfigured if they do what they want, and that the boundary of the course would shrink. The latter means fewer holes are likely to be on what locals still consider to be State Parks land.

The state has money to design how the Upper Truckee River would meander. (That can’t go forward until the lawsuit is resolved.) Money for the first phase of trail improvements is also in hand.

Parks officials are on a year-to-year agreement with American Golf Corporation to operate the golf course. The concessionaire contract will eventually go out to bid with the presumption whatever company is selected will foot the bill to change the golf course to accommodate the river restoration. The parks department could put all sorts of criteria into the request for proposal – like different winter activities must be offered or the clubhouse could be more than it is today.

“People know the golf course, but not what is behind it,” Musillami said. “We don’t want to have a park out there that no one visits.”

That is why his agency wants to be part of the Meyers plan.

But the state agency has some work to do. In the next month or two folks in Sacramento will decide what level of planning document to create for Washoe Meadows – a general plan would be the most extensive or it could be something much less. Each comes with different levels of environmental review.

No matter what the planning process, plenty of meeting attendees voiced their opinions about what they would like to see the area evolve into.

Daunelle Wulstein and others want to make sure equestrians still have trails to ride on and bridges that are safe for their horses to cross. Norma Santiago spoke for several people in asking for the future concessionaire to offer more than golf – to be a center that involves biking, kayaking and more than snowmobiling when it snows. Some talked about refurbishing the Celio barn; maybe even making it a destination for diners on cross country skis or snowshoes. Lynne Paulson wants biking and hiking trails by the river and not the golf course. Kristi Boosman wants fertilizer use to be reduced. Sue Novasel was not alone in wanting mountain bike trails to be plentiful. Rene Brejc wants the Meyers commercial corridor to link to the park.