STPUD tested as it keeps water flowing during fire

The South Tahoe Public Utility District was formed in 1950 to provide wastewater collection and treatment for the then very small community of South Lake Tahoe. Drinking water in South Tahoe’s early years was supplied by private domestic wells or from small privately owned water companies. Well more than two dozen private companies existed on the South Shore in the 1960s and three of them still exist today.

With the passage of the Safe Drinking Water Act of 1974, many of these privately owned systems realized the cost and difficulty meeting the act’s requirements and sought to sell their companies to the district. Since joint water and wastewater agencies are commonplace in California, the district was the likely entity to purchase these smaller systems. Slowly these small systems were cobbled together into the system the district operates today.

Unfortunately, little thought was given to adequate water flows for firefighting since many of the systems were built with surplus 2-inch galvanized steel pipe available in large quantities after World War II. The flows provided by these systems were adequate for domestic use, but woefully inadequate for structure or wildland fires.

Fast forward to Oct. 19, 1991, in the Oakland Hills. An incompletely extinguished grass fire explodes in a three-day fire storm that ultimately consumed 1,520 acres, 3,354 single family dwellings, 437 condos or apartments, injured 150, and killed 25 individuals. Economic damages were estimated in excess of $1.5 billion. Water agencies across the state and beyond had a wake-up call and realized they could be in a similar situation with regards to fire flows.

While fire flows are not mandated by law, in early 1992 the district’s board of directors proposed an aggressive water infrastructure replacement program to increase the firefighting capability of the systems that it had inherited as a matter of sound public policy. Public meetings were held, public support obtained, and the district embarked on a system-wide replacement of undersized waterlines, installation of fire hydrants, construction of new larger water storage tanks, construction of booster pump stations, and auxiliary power generation capability projects that continues to this day. While the district’s Engineering Department estimates at least an additional decade to complete this undertaking, the district is light years from where it was in the early 1990s. 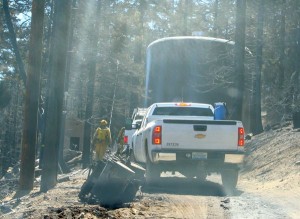 The experience the district gained during the Angora Fire has shaped future water supply projects, operational procedures, and long-range planning as it pertains to water supply. The district, like the vast majority of South Tahoe residents, had never experienced a wildfire of this magnitude and maintaining fire flows became priority No. 1. The Angora Fire, generally regarded as the worst fire experienced within the Lake Tahoe Basin in well over a century, tested the water distribution system as well as the dedicated employees who maintain and operate it. District employees literally were in the middle of the firefight trying to make sure water tanks and fire pumps continued to work and supply water to the fire crews. By the luck of the draw, in the decade prior to the fire, more than $18 million of district customer funds were spent on water supply infrastructure improvements in the Angora area including, most significantly, the auxiliary fire pump station located at Lake Tahoe Boulevard and Boulder Mountain Road. This critical pump station, which has emergency power generating capability, continued to operate despite the almost immediate loss of power due to the fire. Had this significant investment in upgraded infrastructure not been made, it is likely the fire could have been far worse than it was.

During the 24-hour period from the start of the fire on June 24, 2007, until June 25, the district produced 17.6 million gallons of water. Average water production at that time of the year is about 10 MGD. From June 24 through June 30 the district produced a record 89.91 million gallons of water. Even with that volume of production on June 24 the pumps continued to run at full capacity just to maintain demand levels. Early on the morning of June 25, district crews, following firefighters’ observations, discovered the reason that the pumps could not keep up with demand was that each home that was destroyed was an active three-quarter inch (the most common residential connection size) water leak. Multiply that by 254 and it becomes very significant. District crews immediately began to shut off water services that could be quickly located and crimp off those that could not be readily located. 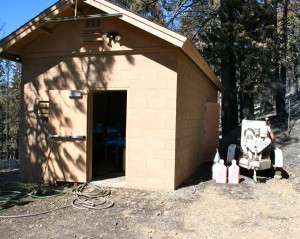 The fire nearly consumed the STPUD pump and control building at Boulder Mountain.

Within hours, water storage tank levels and water pressures began to rise to more normal parameters. USFS Angora Fire Incident Commander Rich Hawkins stated at a fire status briefing that it was highly unusual, at a fire of this size, to not completely run out of water at some point. He noted that the district was able to keep firefighters in water, albeit some low pressures at times, for the duration of the fire. When the fire threatened to move behind Gardner Mountain and jump Highway 89, it was a challenge to access our facilities as residents attempted to evacuate their homes. Nevertheless, once the fire was fully contained, demands on the water distribution system returned to normal.

In the wake of the Angora Fire, California Gov. Arnold Schwarzenegger and Nevada Gov. Jim Gibbons commissioned the Blue Ribbon Fire Commission. One of the commission’s recommendations was greater funding support by federal and state agencies for improved water infrastructure for firefighting in the Lake Tahoe Basin. In 2009, the district acted as lead agency to form the Lake Tahoe Community Fire Protection Partnership. The partnership is comprised of the public water agencies in the Lake Tahoe Basin, both in California and Nevada. The mission of the partnership is to seek federal funding to replace undersized and inadequate water supply infrastructure in the Tahoe basin. Since 2009, the partnership, in concert with the U.S. Forest Service, has secured $12 million in federal funding. Matched 50-50 with local funding, nearly $24 million in critical water supply projects all with a nexus to fire protection, have been completed. Lake Tahoe is a safer place as a result of the success of this local-federal partnership. 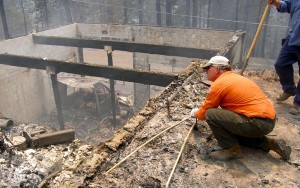 • Increased emphasis on water distribution and redundancy of the water system

• Order of projects were changed in the CIP

While no water agency wants to have their emergency management plan challenged in the real world, the district has taken the opportunity to learn from the events of the Angora Fire and made planning and operational changes that reflect the lessons learned.